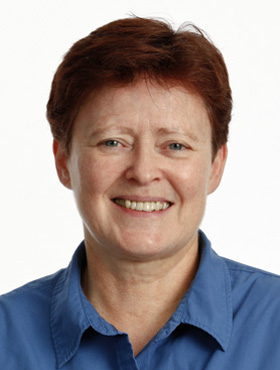 Our research focuses on blood formation, or hematopoiesis, with a major emphasis on the development of red blood cells (erythropoiesis). Defects in the production, structure and/or function of red blood cells, the oxygen carrying cells of the body, lead to anemia. Anemia affects ~1.6 billion people worldwide, imposing an enormous burden on medical resources. We use the mouse as a model system to elucidate the genetic basis of human inherited anemias, which include defects in iron and heme metabolism and transport, sickle cell disease, bone marrow failure, and the anemia of aging. Mice are an excellent model system in which to pursue these studies for many reasons. We share 99% of our genes with mice. Blood formation in mice and humans is remarkably similar, and mice get the same types of anemias due to the same underlying genetic causes as humans do. Identifying the genes that go awry to produce anemia is the first step in developing new therapeutics for prevention and treatment. We study both single gene (Mendelian) defects and complex, polygenic phenotypes that arise from natural genetic variation in inbred strains and other reference mouse populations. We utilize the most state-of-the-art genetic techniques in both genotype- and phenotype-driven approaches to identify and functionally analyze genes critical to erythropoiesis and red cell structure, function, and survival.

Our current projects focus on three major themes. First is the identification of genetic modifiers of embryonic globin expression, critical to sickle cell disease therapy. Second is analysis of aberrant Rasa3-Ras function leading to bone marrow failure in the mutant mouse model, scat (severe combined anemia and thrombocytopenia). Third is the anemia of aging, which affects more than 3 million people 65 years of age or older in the United States (2009 data), is highly influenced by heredity, and is associated with multiple adverse outcomes.

During human development fetal hemoglobin (HbF), composed of two α- and two γ-globin chains (α2γ2), is down-regulated as erythropoiesis switches from the fetal liver to the bone marrow. In the bone marrow, β-globin expression increases and replaces γ, producing adult HbA (α2β2). In SCD, a Glu -> Val substitution in the 6th residue of the adult β-globin chain produces sickle hemoglobin, HbS (α2βs2). As HbF declines during late fetal development and the first few months of life, symptoms of SCD emerge as the ameliorative effects of HbF are lost. In mice, “maturational” globin switching occurs wherein βh1 embryonic globin expression switches to εγ as primitive red cells mature in the circulation. Postnatal elevation of HbF expression via co-inheritance of positive genetic modifiers or hydroxyurea (HU) treatment alleviate SCD severity. However, HU often has adverse side effects, including myelosuppression. Therefore, identification of novel drug targets allowing HbF up-regulation in patients is urgently needed. Although differences exist, many mechanisms of hemoglobin regulation are conserved between mice and humans.

To identify novel genetic modifiers of globin switching, we are mapping quantitative trait locus (QTL) for βh1 expression in F2 intercrosses using the Klf1Nan mouse mutant. KlfNan carries a missense mutation in the gene encoding the KLF1 transcription factor that causes anemia throughout life and that is accompanied by dramatically increased expression of embryonic βh1 globin in adult erythroid cells. We are also mapping QTL for βh1 expression in the high resolution Diversity Outbred (DO) mouse population. These data will be integrated with RNAseq and chromatin immunoprecipitation (ChIP) assays to identify candidate genes. Our ultimate aim is to identify new therapeutic targets for drug discovery.

We recently described the inbred, autosomal recessive mouse mutant scat (severe combined anemia and thrombocytopenia). We demonstrated that scat carries a mutation in a gene not previously recognized as critical in vertebrate hematopoiesis, Rasa3. Scat is an intriguing, unique model characterized by bone marrow failure. Significantly, the disease is episodic. Homozygotes are severely affected in utero and at birth. A remarkable, spontaneous remission ensues in those surviving this first “crisis” period wherein all aspects of the disease phenotype disappear. A second crisis invariably follows, however, and 90% of homozygous mice die by 4-5 weeks of age due to catastrophic hematopoietic failure in both the bone marrow and spleen. Notably, bone marrow failure in humans is known to remit spontaneously as well. The remarkable reversion of the abnormal phenotype to normal in scat offers an entry point into gene networks relevant to bone marrow failure and, more importantly, its reversal in humans.

Anemia in aged (defined as >65 years of age) individuals is a common condition, affecting more than 3 million people (approximately 10%) of the elderly population in the United States. Indeed, the anemia of aging was recognized as so pervasive that the American Society of Hematology declared it a public health crisis in 2009. Epidemiology studies have consistently shown that anemia is an independent risk factor for disability and mortality in the elderly population. Even mild anemia is associated with enormous medical costs due to the large number of significant sequelae including a higher incidence of severe cardiovascular disease, cognitive impairment, poor outcomes from hospitalizations, and decreased physical function. The latter leads to difficulty performing everyday tasks, increased risk of falls and fractures, immobility, isolation, development of frailty and increased mortality in a high percentage of cases. Thus, anemia of aging has an enormous, negative impact on healthspan and quality of life not seen in younger people with anemia.

Our goal is to identify age-related factors influencing baseline hemoglobin levels and related erythroid traits such as the red blood cell count and hematocrit. To accomplish this goal, we have again turned to DO mice. DO mice closely mimic human genetic variation and enable us to obtain QTL with extremely high resolution. In conjunction with The Jackson Laboratory Nathan Shock Center for Excellence in the Basic Biology of Aging, we obtained, aged and phenotyped (complete blood counts) a longitudinal cohort of 600 DO mice at young (6 months of age), middle and old (18 months) ages. These mice are being densely genotyped using SNP arrays, and will be analyzed for QTL influencing hemoglobin levels and other related erythroid traits as a function of age. Ultimately, candidate genes influencing age-dependent changes in red cell parameters will be identified and validated.

The small GTPase RAP1 is critical for platelet activation and thrombus formation. RAP1 activity in platelets is controlled by the GEF CalDAG-GEFI and an unknown regulator that operates downstream of the adenosine diphosphate (ADP) receptor, P2Y12, a target of antithrombotic therapy. Here, we provide evidence that the GAP, RASA3, inhibits platelet activation and provides a link between P2Y12 and activation of the RAP1 signaling pathway. In mice, reduced expression of RASA3 led to premature platelet activation and markedly reduced the life span of circulating platelets. The increased platelet turnover and the resulting thrombocytopenia were reversed by concomitant deletion of the gene encoding CalDAG-GEFI. Rasa3 mutant platelets were hyperresponsive to agonist stimulation, both in vitro and in vivo. Moreover, activation of Rasa3 mutant platelets occurred independently of ADP feedback signaling and was insensitive to inhibitors of P2Y12 or PI3 kinase. Together, our results indicate that RASA3 ensures that circulating platelets remain quiescent by restraining CalDAG-GEFI/RAP1 signaling and suggest that P2Y12 signaling is required to inhibit RASA3 and enable sustained RAP1-dependent platelet activation and thrombus formation at sites of vascular injury. These findings provide insight into the antithrombotic effect of P2Y12 inhibitors and may lead to improved diagnosis and treatment of platelet-related disorders.
View full list of publications

Mission to find a cure for sickle-cell disease

Guadaloupe-native studies sickle cell disease, a condition that affects many members of her family and community.

The health of mouse models can impact the timelines of research studies and interpretation of experimental results. During this...

I am interested in studying the role of neuroinflammation in promoting resilience to cognitive decline in Alzheimer's...

I am interested in the relationships between complex genetics, neurophysiology and behavior, particularly with a bent towards the...