Human pluripotent stem cells and the human embryo: Human pluripotent stem cells (hPSC) have opened up a previously inaccessible phase of the human life cycle to experimental study. However, in order to exploit stem cells in the study of human development, it is critical to have a clear understanding of what embryonic stage and cell type the cultured cells equate to. In the mouse, two different types of pluripotent stem cell lines have been established, one representing the pre-implantation epiblast (naïve or ground state stem cells) and another representing a later post-implantation stage (primed or epiblast stem cells). It is widely held that conventional hPSC are most similar to mouse cells in the primed state. Our laboratory has examined this concept critically, in the context of our previous work examining heterogeneity in stem cell populations and in the light of recent advances in the molecular characterization of the pre- and post-implantation primate embryo. We have used biological assays for self-renewal and pluripotency, combined with analysis of the transcriptome by RNA-seq at the single cell level, metabolomics, and genome wide DNA methylation analysis, on subpopulations of hPSC defined by cell surface markers. We have shown that the self-renewing subpopulation of hPSC most likely corresponds to an early postimplantation state in primate development, and that they differ in significant ways from mouse primed epiblast stem cells. These results will help us to use stem cells to study how genes regulate normal human development and how dysregulation of normal development leads to embryo loss, birth defects, and diseases in later life.

Functional genomics analysis of neural development and regeneration: A functional genomics strategy that incorporates a whole organism level approach in model systems with studies at the cellular level in human pluripotent stem cells has the potential to revolutionise our understanding the origins of developmental disorders. Genetic analysis has revealed that the dual specificity protein kinase DYRK1A has multiple roles in the development of the central nervous system. Increased DYRK1A gene dosage, such as occurs in Down syndrome, is known to affect neural progenitor cell differentiation, while haploinsufficiency of DYRK1A is associated with severe microcephaly. Using a set of known and newly synthesized DYRK1A inhibitors, along with CRISPR-mediated gene activation and shRNA knockdown of DYRK1A, we show here that chemical inhibition or genetic knockdown of DYRK1A interferes with neural specification of human pluripotent stem cells, a process equating to the earliest stage of human brain development. Specifically, DYRK1A inhibition insulates the self-renewing subpopulation of human pluripotent stem cells from powerful signals that drive neural induction. Our results suggest a novel mechanism for the disruptive effects of the absence or haploinsufficiency of DYRK1A on early mammalian development, and reveal a requirement for DYRK1A in the acquisition of competence for differentiation in human pluripotent stem cells. Upcoming work will address the role of DYRK1A and other neurodevelopmental genes in regeneration and repair in the central nervous system. 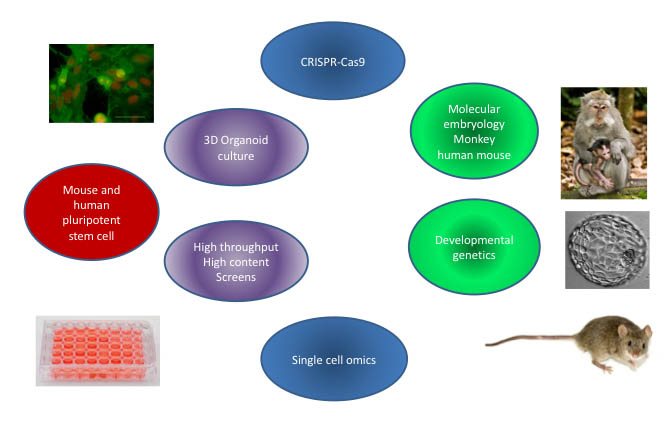 Stem cells to study development and tissue regeneration and repair in man.  A range of new tools has greatly expanded the power of pluripotent stem cells as models for studying human embryology and tissue regeneration and repair.    These tools include 3D organoid culture, which enables morphogenesis through cell-cell interactions, CRIPSR/Cas9 for genetic and epigenetic editing and control of gene expression, high content screening methodology, and single cell omics.  These technical advances, coupled with breakthroughs in primate molecular embryology and advances in human developmental genetics, have made pluripotent stem cells into a powerful platform for the study of human gene function in health and disease