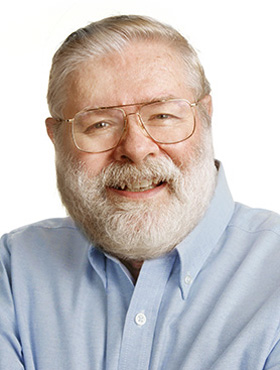 Researches the genetics of aging and lifespan, seeking to understand the basic mechanisms of aging, and adult stem cells, with the goal of delaying normal aging processes.

We die from the first thing that kills us. As we age, we become progressively more susceptible to disease, so if we don't die from one disease, we die from the next most competitive disease — or the next. For example, if we don't die from cancer, we might die from heart disease, stroke or kidney failure, each of which could have been progressing simultaneously with the others, but at its own rate. The disease we die from is the one that progresses to a level of seriousness that causes the failure of a vital biological system. To maintain health and extend our lives, we must delay or prevent all the diseases of old age.

It is this philosophy that leads us to search for mouse models of delayed senescence and to study the mechanisms by which senescence is delayed in those models. We have no pre-conceived notions; we start with a model that works and investigate why it does. As we learn about the mechanisms, we develop hypotheses. The more we learn, the more refined our hypotheses become. Our long-term goal is to develop interventions, suitable for human beings, that delay aging and prolong health.

Our studies of hematopoietic stem cells (HSCs) focus on molecular genetic mechanisms that regulate differentiation, self-renewal and aging. Hematopoietic precursors are a useful model for adult stem cells in general for two reasons. First, they are essential, producing not only all erythroid, myeloid and lymphoid cells, but natural killer cells and mast cells; they also produce the macrophages found in liver, lung, bone, brain and other tissues. Second, they are a well-defined example of self-renewing and differentiating cells that illustrate methods applicable to other stem cell systems. Because differentiated cells turn over continually, constant stem cell proliferation is necessary. In fact, partial proliferative exhaustion can explain losses with age in the many tissues in which repair and function depend on regeneration from adult precursor cells. In general, any impairment of stem cell function with age would reduce health in many biological systems. Conversely, any improvement of stem cell function with age could prolong health in many biological systems.

To better characterize aging in mice, the Jackson Aging Center carried out a lifespan study of 31 genetically-diverse inbred mouse strains housed in a specific pathogen-free facility. Clinical assessments were carried out every 6 months, measuring multiple age-related phenotypes including neuromuscular, kidney and heart function, body composition, bone density, hematology, hormonal levels, and immune system parameters. In a concurrent cross-sectional study of the same 31 strains at 6, 12, and 20 months, more invasive measurements were carried out followed by necropsy to assess apoptosis, DNA repair, chromosome fragility, and histopathology. In this report, which is the initial paper of a series, the study design, median lifespans, and circulating insulin-like growth factor 1 (IGF1) levels at 6, 12, and 18 months are described for the first cohort of 32 females and 32 males of each strain. Survival curves varied dramatically among strains with the median lifespans ranging from 251 to 964 days. Plasma IGF1 levels, which also varied considerably at each time point, showed an inverse correlation with a median lifespan at 6 months (R = -0.33, P = 0.01). This correlation became stronger if the short-lived strains with a median lifespan < 600 days were removed from the analysis (R = -0.53, P < 0.01). These results support the hypothesis that the IGF1 pathway plays a key role in regulating longevity in mice and indicates that common genetic mechanisms may exist for regulating IGF1 levels and lifespan.
View full list of publications