Investigates the genetic regulation of meiosis and the mechanisms of male fertility to understand how errors in meiosis can lead to developmental abnormalities.

Discovery of genes required for fertility 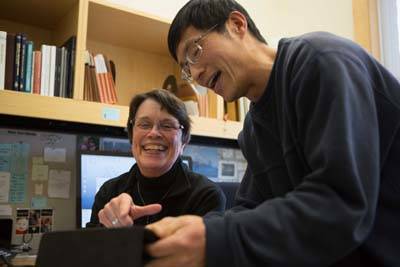 Research in the Handel laboratory benefits greatly from the long-standing JAX Reproductive Genomics Program, a mutagenesis screen that has been successful in generating and identifying mutations that cause infertility. Interestingly, the majority of mutations generated by the Reproductive Genomics Program affect male fertility only. Many of these result in abnormal sperm morphology and motility, providing models for human male infertility syndromes and revealing that distinctly different single gene mutations can cause similar, complex and non-specific sperm pathologies, a point with important implications for managing cases of human male infertility and understanding action of reproductive toxins. 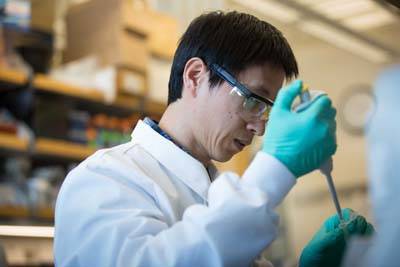 Several genes discovered by the Reproductive Genomics Program affect chromosome behavior and progress of meiosis, providing both new alleles of previously known genes, as well as mutations in previously unknown genes. Among the latter, we found that the Spata22 gene is essential for one or more key events of early meiotic prophase, including normal synapsis and repair of meiotic DNA double-strand breaks. The mutant phenotype of Eif4g3 revealed for the first time the role of specific translational regulation in the progress of mammalian meiosis and spermatogenesis. 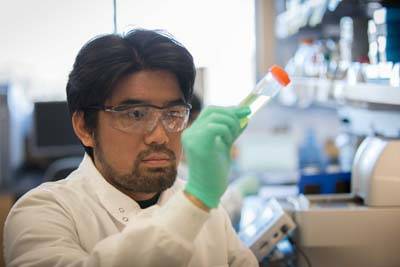 A long-standing goal of our laboratory has been to understand how the germ cell regulates the onset of the meiotic division after recombination is complete. Previous work in our laboratory demonstrated the importance of cell-cycle-active kinases, and more recent work has provided cellular and biochemical evidence for a role of the polo-like kinases in promoting desynapsis of paired homologous chromosomes. Identification of the substrates of PLK1 provides new ways to investigate mechanisms of desynapsis. Additionally, genetic evidence reveals unexpected complexity in the regulation of the onset of the meiotic division phase; from the Reproductive Genomics Program we discovered that mutation in the Eif4g3 gene, encoding eukaryotic translation initiation factor 4, gamma 3 arrests meiotic prophase at the decision point for desynapsis and entry into the division phase. Global protein translation is not affected, but, strikingly, HSPA2, a chaperone protein for CDK1 kinase, is absent in the mutant spermatocytes. in spite of the presence of Hspa2 transcript, identifying a specific substrate for translational regulation by EIF4G3. These results provide the first evidence for acute and selective translational control of meiotic exit in mammalian spermatocytes.Together, our studies are providing information about both the temporal order and regulatory relationships of the earliest events in the transition from meiotic prophase to metaphase. 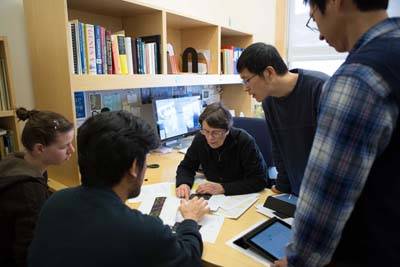 Genetic and cellular analyses of initiation of meiosis

In collaboration with the Paigen and Carter laboratories, we investigate genetic and cellular aspects of the initiation of meiotic recombination, focusing on the role of the protein PRDM9. As show by Paigen and colleagues, PRDM9 is the major activator of mammalian recombination hotspots. We integrate analysis of these studies with our ongoing work on the importance of meiosis-specific proteins involved in the structural maintenance of meiotic chromosomes. 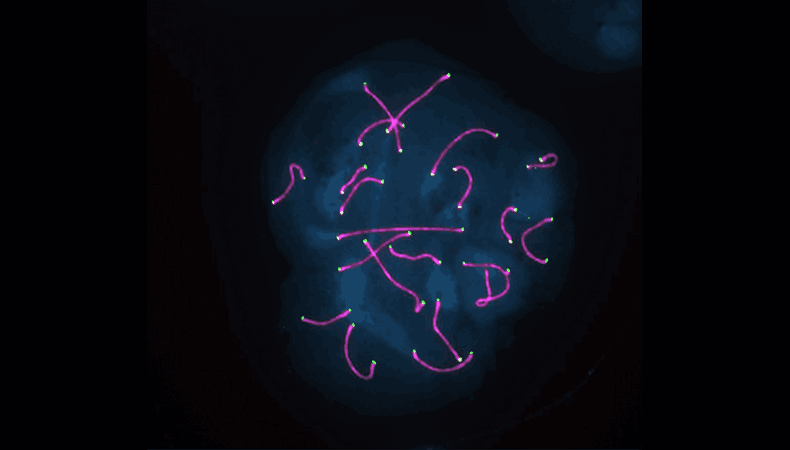 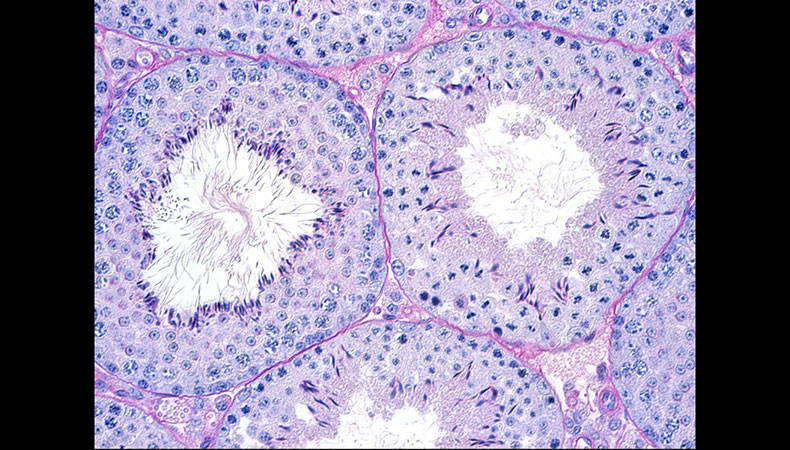 This histological cross-section of an adult mouse testis shows layers of germ cells in various stages of differentiation from mitotic spermatogonia, meiotic spermatocytes, and haploid spermatids. 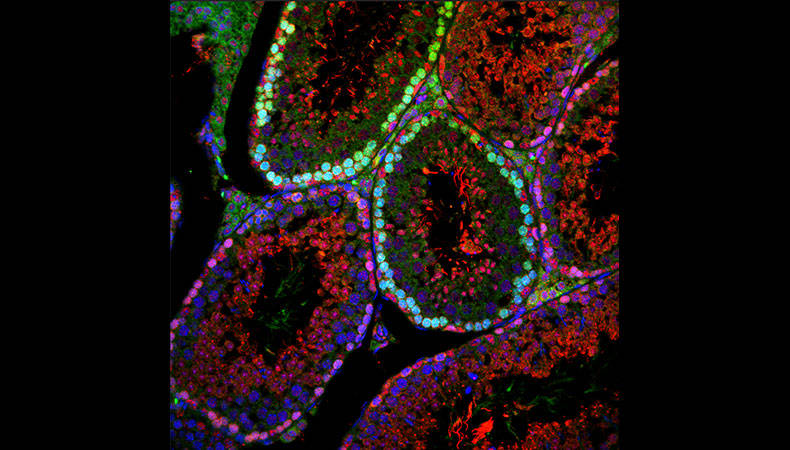 This cross-section of a mouse testis shows co-localization of two proteins involved in meiotic recombination, RPDM9 (green) and REC8 (red). 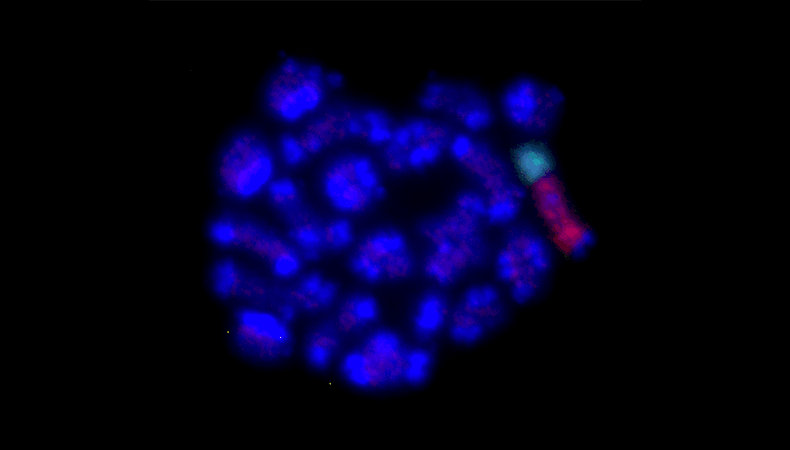 This image of male germ cell chromosome pairs poised to separate in the meiotic division phase shows the two sex chromosomes identified by chromosome-specific probes, the X in red, and the Y in green. 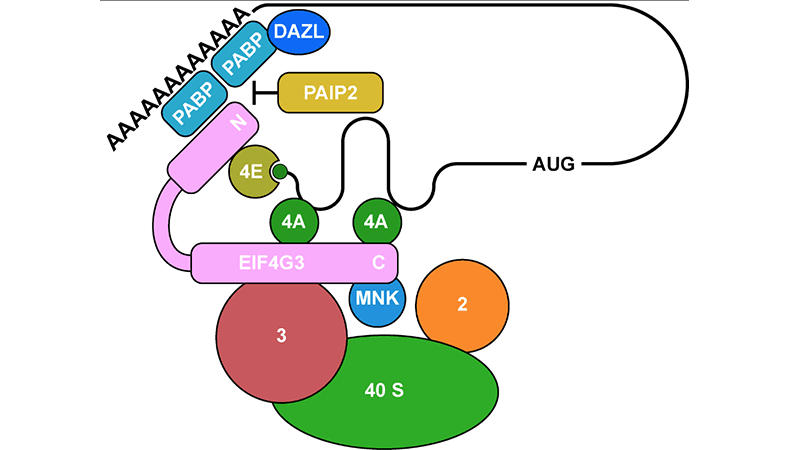 This cartoon shows the position of the scaffold protein, EIF4G3, in the eukaryotic translation initiation complex. Mutations affecting this protein cause male infertility, with arrest of meiosis just before the division phase. 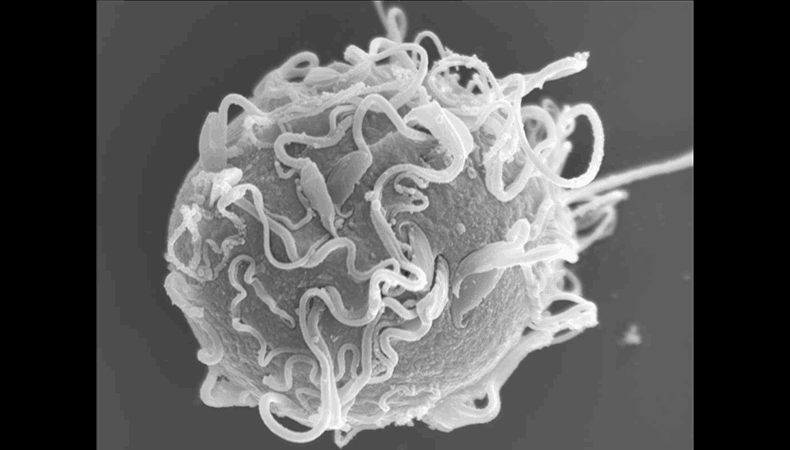 This scanning electron micrograph shows sperm from a mutant male produced in the Jackson Laboratory Reproductive Genomics Program. The sperm are able to bind to the zona pellucida of the oocyte, but they cannot prenetrate.

Produce and distribute mutant models for infertility and to investigate underlying causes in order to identify new genes and pathways contributing to...

I develop tools to describe the phenotypic features of neurodevelopmental disorders and discover their associated genotypes.

Researching meiosis, the mechanisms of DNA damage detection and repair during normal development of gametes, and implications for fertility...