Our laboratory integrates cytogenetic, genomic, and evolutionary methods to understand the biological causes of variation in the mechanisms that shape patterns of DNA inheritance and drive genome evolution. Our current efforts focus on four experimental foci.

Recombination is central to both genetics and evolution. In many species, including humans, the correct segregation of homologous chromosomes is contingent on the presence of at least one well-positioned recombination event per homolog pair. The improper patterning of recombination events across chromosomes can lead to aneuploidy, a major risk factor for spontaneous fetal loss and developmental disability in humans. At the same time, recombination is an important mechanism generating genetic diversity. By rearranging existing variants into new multi-locus combinations, recombination controls the rate at which novel haplotypes are created and shapes the evolutionary fates of alleles in populations. Despite its fundamental significance, recombination is remarkably variable, with documented rate heterogeneity across single genomes, marked differences between individuals, and pronounced divergence between species. 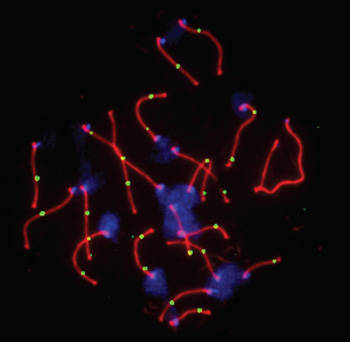 MLH1 is a mismatch repair protein that functions in crossover resolution. The immunofluorescent detection of MLH1 foci (green) along the mature synaptonemal complex (red) in spermatocytes at late prophase of meiosis I provides an accurate estimate of the global crossover frequency in a cell. Centromeric proteins are stained blue. (Approx. 1000x magnification.)

Our research goal is to understand the genetic causes of recombination rate differences between individuals and closely related species. Toward this end, we capitalize on the recognition that the global frequency of recombination is a complex genetic trait amenable to analysis using standard quantitative genetic tools. We use cytogenetic approaches to estimate crossover rates in single individuals with diverse genetic backgrounds in effort to identify genetic loci that contribute to differences in this trait.

Using this general research strategy, I previously identified a set of 8 genomic regions that contribute to a pronounced difference in the global crossover rate between males from two closely related subspecies of house mice, Mus musculus musculus and M. m. castaneus. Two of these recombination rate modifying loci localized to the X chromosome. Interestingly, at both of the X-linked modifiers, the allele from the low recombination rate M. m. castaneus parent confers an increase in global crossover rate. We are utilizing existing genomic resources and datasets to identify promising candidate genes for this locus. Ultimately, we aim to pursue candidate loci using functional genetic experiments in order to shed light on the fascinating evolutionary dynamics of this crossover rate modifier, including its potential antagonistic effects on male and female crossover rates.

Evolution and meiotic function of the mammalian pseudoautosomal region

The production of haploid gametes during meiosis is dependent on the homology-driven processes of chromosome pairing, synapsis, and recombination. On the mammalian X and Y sex chromosomes, which lack homology across most of their length, these key meiotic activities are confined to the pseudoautosomal region (PAR), a short region of near-perfect sequence identity between the X and Y. Failure to initiate or maintain pairing across the PAR is associated with early meiotic arrest, and reduced recombination across the PAR has been directly linked to errors in sex chromosome segregation in humans. Expectedly, mutations that disrupt sequence homology across the PAR are associated with male infertility and elevated rates of sex chromosome aneuploidy.

Despite its importance for meiosis, the PAR is rapidly evolving. Comparative sequence analysis and evolutionary theory point to its gradual degeneration and eventual disappearance in the genome. These observations present a biological contradiction: How can such a functionally significant region of the genome – and notably one whose function depends on homology to a sequence on the other sex chromosome – evolve so rapidly? A long-term goal of our research group is to understand the mechanistic and evolutionary processes that fuel this paradox.

Toward this objective, we are seeking to understand how genetic variation across the PAR influences the meiotic function of this locus. We are currently combining cutting-edge sequencing technologies with cytogenetic methods for monitoring sex chromosome dynamics at meiosis to understand how levels of divergence between X- and Y-linked PARs influence the efficiency of pairing, synapsis, and recombination at this locus.

Variation and diversity of the germline mutation rate in mice

Germline mutation provides the raw source of all new variants in populations, ranging in scale from single nucleotides to whole chromosome aneuploidies. Although models of both disease and evolution typically assume that the rate of mutation is uniform in space and time, empirical evidence strongly contradicts this assumption. Indeed, mutation rates fluctuate across genomes and differ among species, individuals, and between the sexes. Mutation rates even change as an individual ages. Given that germline mutations fuel adaptive evolution and give rise to heritable diseases, these observations carry direct relevance for both evolutionary inference and accurate assessment of disease risk and prevalence.

We are currently interested in characterizing differences in mutational spectra among genetically diverse mice. We are using analysis of whole-genome sequences from pedigreed animals to identify de novo mutation events and infer the action of distinct mutational mechanisms. We also employ single-cell and cytogenetic analyses of gametes to estimate the rate of large-scale mutational events such as whole-chromosome aneuploidies. Recently, we demonstrated significant differences in sperm aneuploidy rate among inbred mouse strains. Our on-going efforts will concentrate on identifying genes contributing to differences in aneuploidy rates among strains, with the recognition that the biological mechanisms at play in mice are likely contributing to differences in aneuploidy rates among humans.

For organisms with X/Y sex determination, the basic rules of inheritance predict that 50% of offspring will be male and 50% will be female. However, deviations from a 50/50 sex ratio are pervasive in nature, and are even evident in humans. Beyond being a point of inherent biological interest, sex ratio biases can have profound effects on population dynamics, are relevant to understanding the inherited risk of sex-linked diseases, and factor into the conversation on cultural gender preferences in human populations.

We are leveraging decades of detailed breeding records maintained at The Jackson Laboratory to characterize strain differences in live birth sex ratio. Our goal is to identify genetic and environmental variables that skew live births toward an excess of males or females. We are motivated to understand the biological causes of sex ratio bias, including the developmental time point at which biases arise. 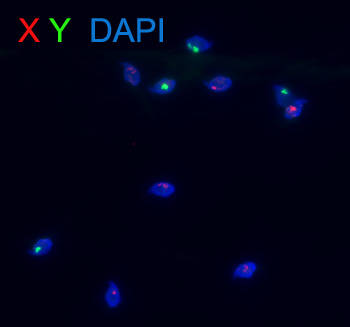 One biological mechanism for sex ratio bias is differential survival of X- versus Y-bearing sperm. We use fluorescent in situ hybridization on sperm to test this possibility. (Approx. 1000x magnification.)