Drug developers regularly exploit the natural ability of B cells to create hundreds of thousands of antibodies and select the ones specific to their target (Singh S., 2018). Depending on the site of interaction, antibodies can block or activate the target protein, favor its clearance, or induce an immune response against cells expressing the target. Moreover, antibodies can be conjugated to drugs or toxins to increase their local concentration at specific sites.
As compared to other proteins that have a serum half-life of a few hours, antibodies are very stable in circulation. Immunoglobulin G (IgG), the most commonly used isotype for therapeutic development, has an approximate half-life of 21 days. The mechanism behind IgG's extended half-life lies in the interaction between IgG and the neonatal Fc receptor (FcRn) (Roopenian et al., 2003; Challa et al., 2014). Cells lining the blood vessels internalize IgG and shuttle it to the lysosome. The low pH in acidified endosomes causes IgG to bind with FcRn. The IgG: FcRn complexes are subsequently recycled away from the lysosomal degradative pathway to the cell membrane, where, at neutral pH, IgG dissociates from FcRn, releasing IgG back into circulation.
There are several challenges facing researchers who are developing therapeutics, including assessing half-life, selecting efficacious variants, and determining dosage for clinical trials. Given these challenges, what solutions does JAX provide to enable researchers to get accurate antibody data, saving both time and resources?

Problem: How do I predict antibody half-life?

Measuring half-life of therapeutic candidate molecules is often overlooked because, until a few years ago, the available animal models had significant limitations to test the half-life of human antibodies accurately. For instance, standard rodent models are relatively inexpensive and easy to work with to test half-life of IgGs. However, one disadvantage to using standard rodent models is that mouse and rat FcRn do not bind human IgG with the same affinity as human FcRn leading to inaccurate half-life data (Ober et al., 2001). While non-human primates can predict with reasonable accuracy the half-life of human antibodies in patients, their use for screening at early stages in drug development is not a feasible option due to both ethical and practical reasons.

To address the lack of preclinical models to predict human therapeutic half-life accurately, JAX scientist Dr. Derry Roopenian developed mice expressing transgenic human FCGRT, the gene that encodes FcRn and lacking the endogenous murine gene (Proetzel and Roopenian, 2014). These “Tg32” and “Tg276” FcRn humanized mouse models can be used to predict the PK of IgG antibodies in humans with an accuracy comparable to non-human primates (Fig. 1a and Fig. 1b). Furthermore, as shown in figure 2 using the Tg32 model as an example, the variability between the mice is minimal, enabling a small number of animals per study. 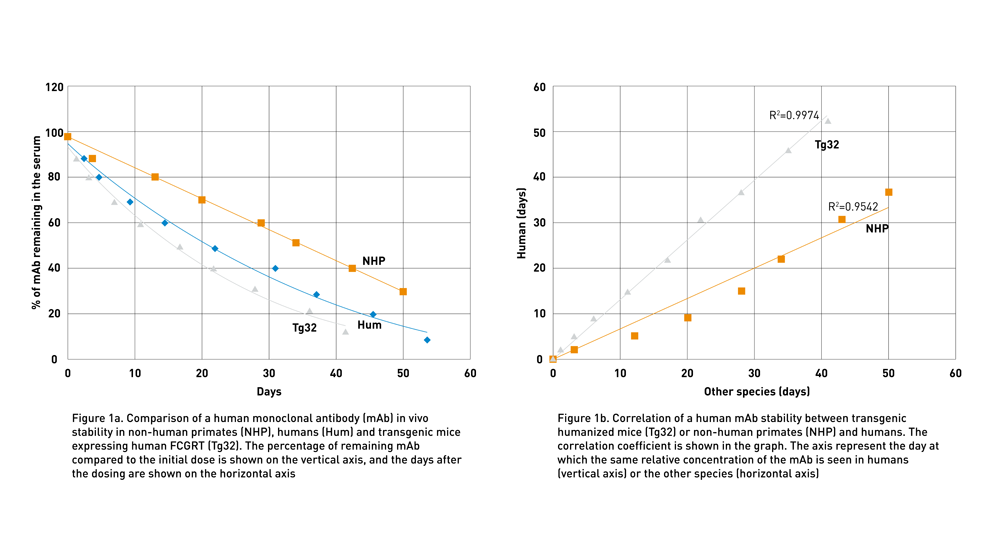 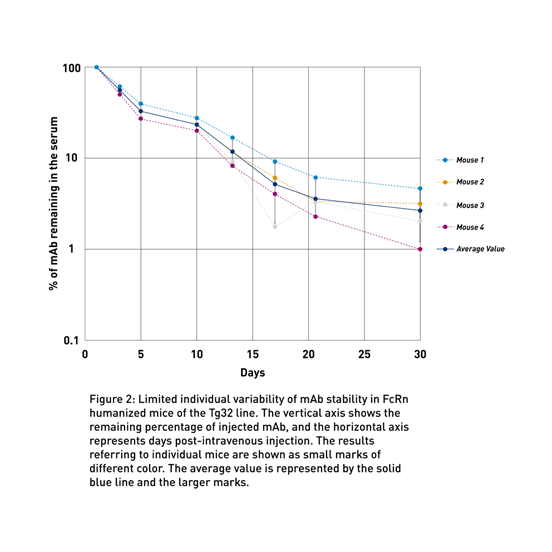 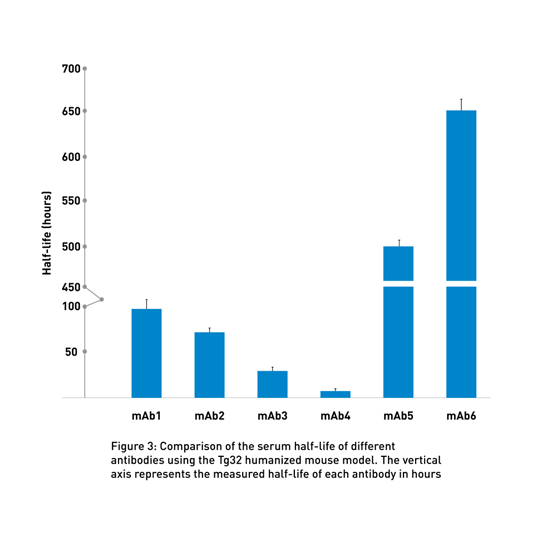 Problem: How can I identify the right antibody variant?

Antibodies can be modified in several ways. For example, Fc engineering may result in multiple variants of the same antibody, each with slightly different in vivo half-life and potentially different effector functions. Due to their similar structure, it is often difficult to identify the variant with the most extended half-life (Fig 4a). 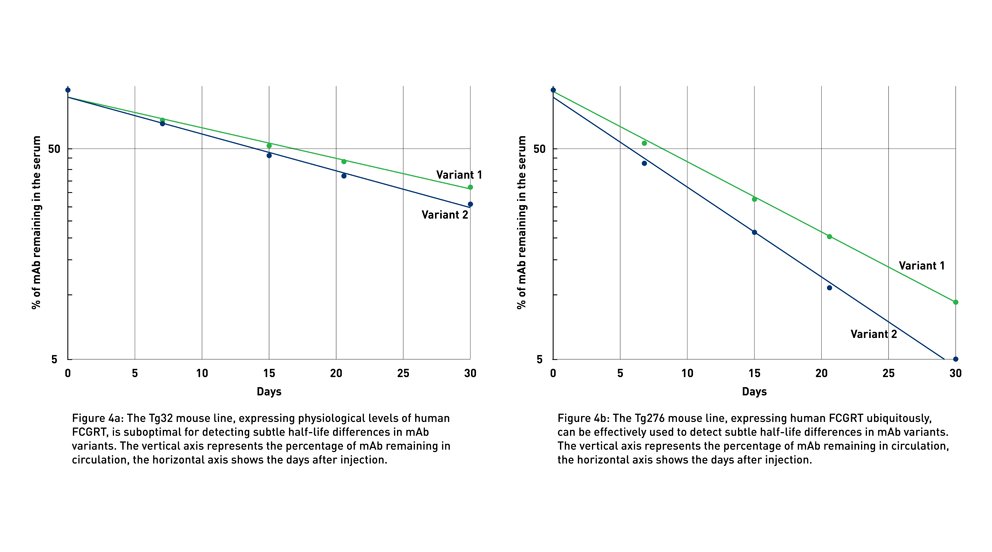 JAX Therapeutic Antibody Evaluation Services rely on the use of human FcRn Tg276 mice (004919), which ubiquitously express the human gene at high levels in all tissues (Latvala et al., 2017). Although the levels and pattern of expression of the transgene in Tg276 mice do not recapitulate the physiological expression of FCGRT in humans, these animals represent the optimal tool to detect the smallest differences between similar monoclonal antibodies (mAbs) (Fig 4b), allowing researchers to differentiate between variants for further development.

Problem: How do I determine which dose is the best for my antibody?

The use of antibodies has resolved many issues regarding drug toxicity. The inherent specificity of antibodies makes potential off-target effects significantly less likely, and, due to their composition, impossible to be converted to toxic catabolites. The primary sources of antibody-mediated toxicity are linked to the expression of the antigen at non-therapeutic sites, and hyperactivation of the immune system in case of immunomodulatory antibodies (Brennan et al., 2010). In both cases, the appropriate dosing of the therapeutic antibody can help to prevent or limit the adverse reaction. However, if accurate preclinical data predicting the PK of an antibody in humans is not available, it is challenging to set a therapeutic dose when designing a clinical study. In many cases, it is necessary to perform a dose escalation in humans, with the risk of reducing the efficacy of the treatment or increasing the likelihood of side effects. 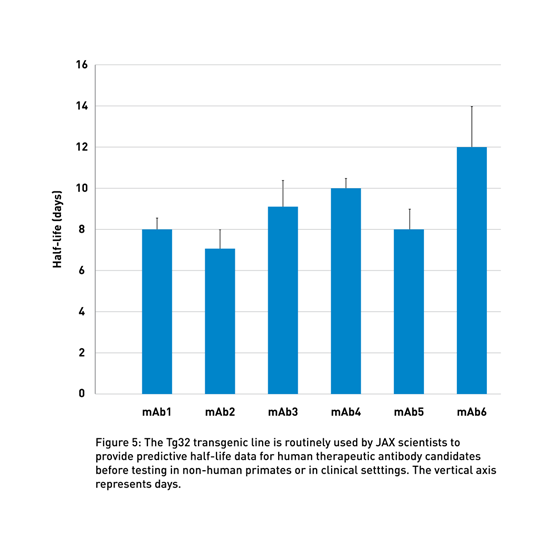 Problem: What if my therapeutic generates anti-drug antibodies?

FcRn humanized mice have a functional mouse immune system. Although this is usually not an issue, sometimes human antibodies are immunogenic in rodents and elicit an anti-drug antibody (ADA) response. When this happens, the half-life of the human antibody is severely reduced, and the PK data can be challenging to interpret. If ADA manifests only in a small number of mice, it might be possible to discard the data from the affected animals.
In some cases, however, a majority of animals in an experimental group exhibit an ADA response, which undermines the entire experiment.

Scientists at JAX have backcrossed the Prkdcscid gene onto the Tg32 mouse to make it immunodeficient (018441). Since the Prkdc gene is required for generating mature B cells, mice with the scid mutation cannot produce antibodies, excluding the possibility of an ADA response (Myzithras et al., 2017; Fig 6). 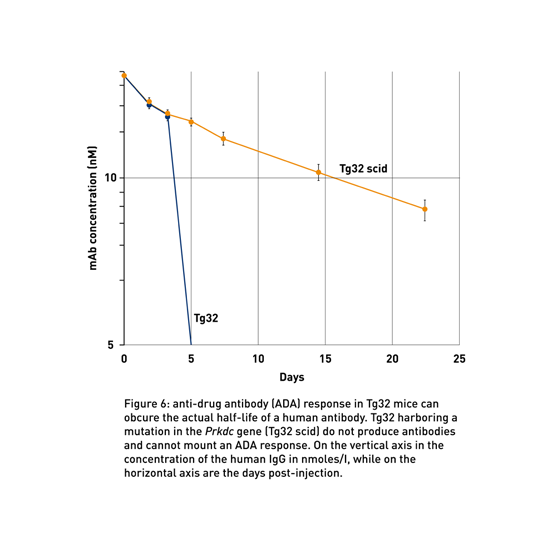 Why Use JAX Antibody Testing Services?

In vitro experiments in rodents can provide some useful information about the stability of a mAb, but they cannot predict its in vivo half-life accurately. Due to inherent binding differences between the mouse and human system of IgG recycling, mAb half-life data obtained in standard mice are not translatable to humans. Until now, the only animal models that have been proven clinically predictive of mAb half-life are non-human primates. However, the use of non-human primates for antibody optimization is very problematic due to the many ethical and budgetary issues.
Dr. Derry Roopenian at JAX, recognizing this hurdle in therapeutic mAb development, has created several humanized mouse models that can be used to obtain clinically translatable therapeutic human antibody half-life data (Roopenian DC et al., 2010; Proetzel and Roopenian, 2014). JAX Therapeutic Antibody Evaluation Services are based on the use of this unique collection of innovative mouse strains and include study directors, some of whom have been directly involved in the development of the humanized mouse models used in these studies. This exclusive service from JAX  is a fast and cost-effective option for researchers developing novel IgG, Fc-, or albumin-based biologics to obtain accurate, translationally relevant half-life data, and to identify the therapeutic molecules with the highest likelihood of success in the clinical setting.
To learn more, visit the JAX Therapeutic Antibody Evaluation Services page.

Are you using the B6 substrain corresponding to the latest Reference Genome Sequence? A team of JAX researchers recently published “The Genome of C57BL/6J …