Women in Science: Hilde Mangold and the embryonic organizer

I remember learning about Hilde Mangold during my biology classes as an undergraduate student, and being in awe of her discoveries and the challenging experimental techniques she mastered. I still have that textbook; I look at it all the time! She is a personal heroine of mine, and I hope you will begin to see why as you read her story and learn about the fascinating science of development. 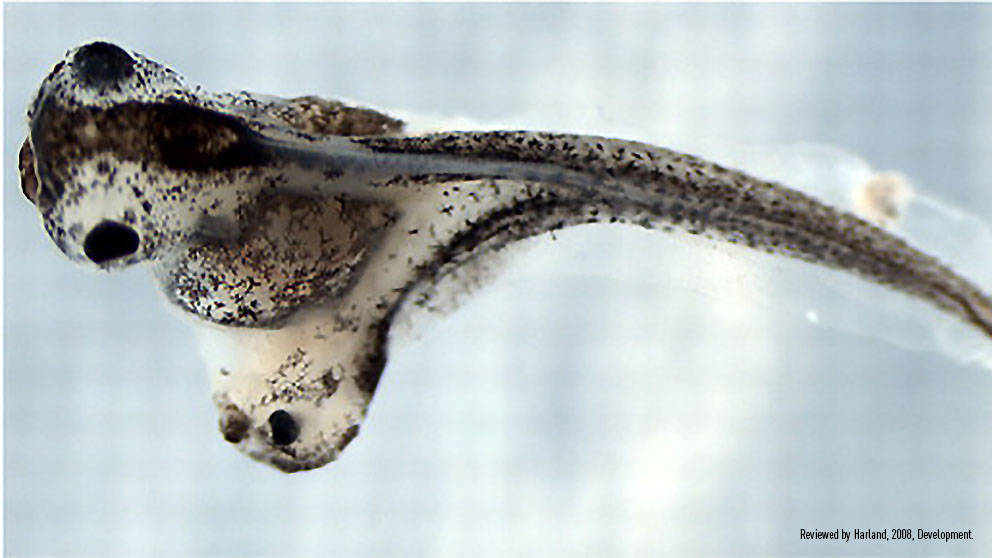 In the early 20th century Hans Spemann was a well-known figure in experimental embryology, which refers to the study of how tissues and cells become specified in the developing embryo. By this time period embryologists were employing amphibian species, such as frogs or newts, as model systems for embryonic development due to their large cell size and rapid developmental progression. Fate mapping allowed scientists to track cells in these developing embryos and observe how these cells migrated and contributed to different tissues in later stages.

Hans Spemann studied very early development, right after fertilization through the gastrulation phase. “Gastrulation” refers to the rapid migration and rearrangement of the embryo into three distinct cell types: the ectoderm, mesoderm, and endoderm, which form all of the tissues of the developing embryo.

The mechanism of cell specification in the embryo was not well understood, although gastrulation did appear to play a pivotal role in this process. Spemann discovered that prior to gastrulation, cell identity was plastic; if you transplanted these cells, they could become any of the three cell types. After gastrulation, embryonic cells were no longer able to alter their cellular identity. Something important was happening during this stage of development, but researchers were unsure as to what it could be.

In studying the movements of the embryo, scientists observed that gastrulation began in cells comprising the presumptive dorsal, or back, side of the embryo. Spemann found that a certain piece of the two-cell stage newt embryo, termed the “gray crescent” for its color, was completely required for embryonic growth. When this area was fate-mapped into later embryonic stages, he found that the gray crescent gave rise to the dorsal cells that initiate gastrulation.

Spemann was intrigued by the potential function of these dorsal cells, as they appeared essential for the earliest stages of embryonic development. Their role was still unknown, but it would form the basis for an incredible scientific discovery.

Hilde Mangold was born 20 October 1898 in Gotha Thuringia, an east central German province. Her parents, Ernest and Gertrude Proescholdt, owned a soap factory, and were considered quite wealthy for the time. Little else is known about Hilde’s early life. She attended the University of Jena for two years before transferring to the University of Frankfurt in 1919.

She was disappointed when her assigned thesis project was simply to replicate the findings of Abraham Trembley, a scientist in the late 1700s. Trembley studied Hydra, a small freshwater species that is capable of regeneration. Trembley claimed that when a hydra was flipped inside out that the cells altered their identity; cells previously on the inside became exterior cells, and vice versa. Frustrated, but determined to be successful, Mangold set to work on inverting hydra polyps.

There was no doubt about Spemann’s prejudice against women.

This wasn’t the only time that Spemann had given his female graduate students projects that amounted to little more than supportive grunt work. Salome Waelsch, considered the founder of modern developmental biology, joined Spemann’s lab in 1928 and was given a similarly trivial task for her thesis, “a rather boring descriptive study of limb development... which would provide the essential basis for [a] young man’s quite exciting experimental problem.” Waelsch went on to state that, “There was no doubt about Spemann’s prejudice against women,” and cites Mangold as a prime example.

Even if she had wanted to complete this project, Mangold’s hydras were not cooperating. She spent over a year working on this assignment, and in the end even Spemann was unable to make a hydra flip inside out. Feeling as though she was losing time, Mangold pressured Spemann for a new project, and he finally gave her a task worthy of her skill.

Building upon Spemann’s prior work, her new project was to determine how cell identity was specified during gastrulation. Spemann and Mangold hypothesized that the dorsal cells, the cells that initiate gastrulation, were somehow instructing cell identity. The best way to test this hypothesis was via embryonic cell transplants.

Spemann himself was a master of transplantation experiments using newt embryos, and Mangold was a gifted student. She performed transplants of the dorsal cells using species with different cell pigmentation, so that transplanted cells could be visually distinguished from host cells by their color. If their hypothesis was correct, the transplanted cells should induce gastrulation of surrounding cells in the host embryo, essentially leading to development of a second body axis.

Once eggs were fertilized, Mangold had to watch them closely until they were at just the right point for transplant. She then had to carefully remove their outer membrane and dissect this minute region of cells using a very thin glass needle. These glass needles were actually made in the Spemann lab- he designed them specifically for his embryological research. To manipulate the host embryo, Mangold used another one of the lab’s innovative tools. Spemann took a strand of his child’s hair, made a loop, and inserted the ends of the hair into a thin glass tube. A bit of hot wax sealed the ends inside the glass tube, so that this loop of hair could be easily manipulated as a surgical tool.

She took the dissected cells from the dorsal lip and pressed them onto the ventral side of the host embryo. At the end of the transplant, the embryos were placed back into pond water, and Mangold simply had to watch and wait. Most of the embryos died, as antibiotics were not yet available, and without the thin layer of outer tissue there was nothing to protect the embryos from pathogens and contaminants in the pond water.

Two days later, she would find that her hypothesis was correct- surviving embryos had indeed developed a second body axis! When followed out several more days, she observed that an entire neural tube and brain would form at the site of the transplant. Importantly, these new structures were formed from the host cells surrounding the transplanted tissue. This experiment demonstrated that the transplanted cells were instructing, or inducing, neighboring cells to migrate and adopt specific cell fates. 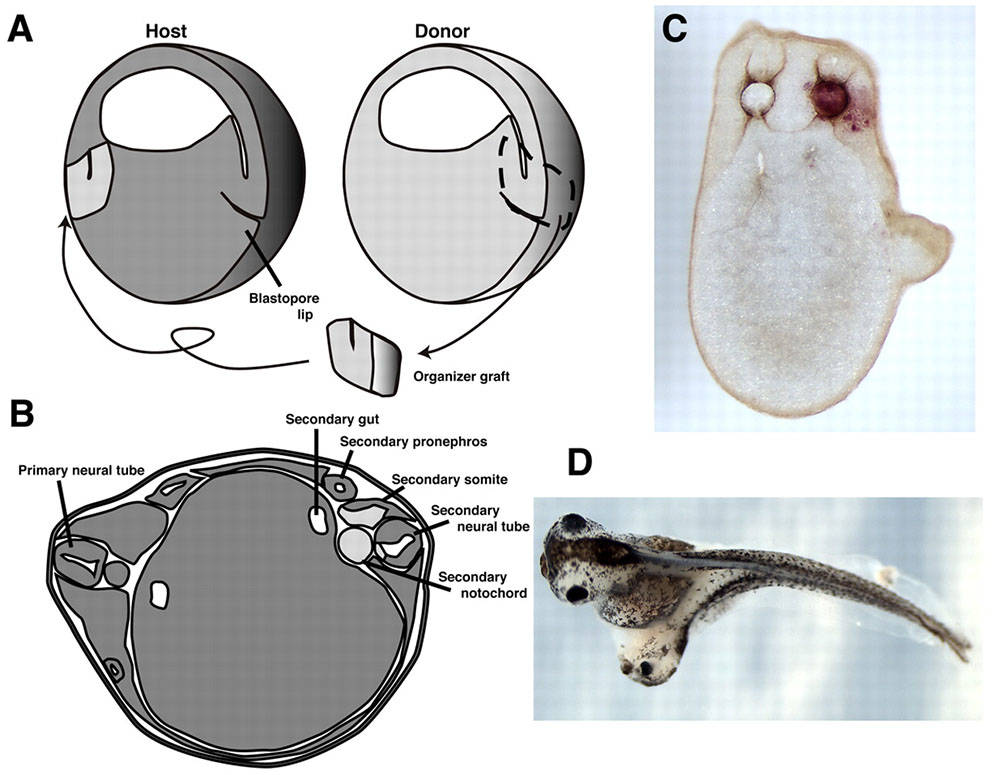 Organizer grafts result in induction of a secondary axis. (A) Schematic of the organizer graft created by Spemann and Mangold, using a light-gray newt donor (Triturus cristatus) grafted into a dark-gray host (Triturus taeniatus). The gastrulae are shown in hemisection for illustrative purposes only (dorsal is towards the right, and the dimensions of these embryos are more Xenopus-like than Triturus-like). (D) Twinned Xenopus embryo, resulting from an organizer graft carried out at stage 10. Reviewed by Harland, 2008, Development.

Mangold worked on this project for two years, transplanting and recording the results of over 250 newt embryos. In the end, only six would survive and be presented in her 1924 thesis publication, “Induction of Embryonic Primordia by Implantation of Organizers from a Different Species.”

Despite her individual efforts, Han Spemann’s name is listed as first author on her thesis publication. Her lab-mate Viktor Hamburger, who was pursuing his PhD at the same time as Hilde, wrote, “I and all the rest of us saw ourselves proudly in print as sole authors” for their respective dissertations. Mangold was frustrated by Spemann’s interference and insistence in the authorship of her thesis, and rightfully so. Her project was no more Spemann’s than any other graduate student in the laboratory, as all the graduate student projects were assigned and directed by Spemann.

But in the end, Mangold had very little say in the matter. Shortly after completing her PhD, she moved with her husband, Otto Mangold, and young son to Berlin. In 1924 a gasoline heater exploded in her kitchen, and Mangold died shortly after, suffering from severe burns. She was only 26 years old.

Legacy of the Organizer

The Organizer paper has been called one of “the most significant events in experimental embryology.” Mangold and Spemann laid the groundwork for research on embryonic induction, the process by which certain cells release signals and direct neighboring cells to move or differentiate in specific ways. Hans Spemann accepted the Nobel Prize for this work in 1935, making Mangold’s paper one of the few dissertations to directly lead to this prestigious award.

Nobel Prizes are not awarded posthumously, so it is impossible to know if the committee would have included Hilde Mangold in the award. After all, Spemann had contributed significantly to embryological research, and his entire body of work was well worth the Nobel Prize. I would like to note that Spemann mentions Mangold a total of two times during his Nobel lecture, and does not include the fact that it was her dissertation project. Given the fact that the Nobel Committee specifically cited Mangold’s thesis in the prize announcement, her role was significantly minimized during Spemann’s speech. Hilde Mangold most certainly deserves recognition for her brilliant contribution to this field.

It has often been said that the Organizer raised more questions than it answered: Why can this group of cells induce surrounding cells to move and differentiate into specific cell types? How do they gain this ability, and what is the nature of this phenomenon? It would be decades before these questions were answered in a satisfying manner, and many aspects of embryonic development are still under intense research today.

This work revealed that development is interactive, and sparked an intense amount of research into how cells differentiate. Mangold and Spemann’s influence can be seen throughout biology and medical research to this day. Scientists can take human embryonic stem cells and differentiate them into countless cell types in culture. We can even take differentiated cells and make them undifferentiated again! All of these advances can be related back to basic developmental biology, and a little patch of cells in the amphibian embryo. 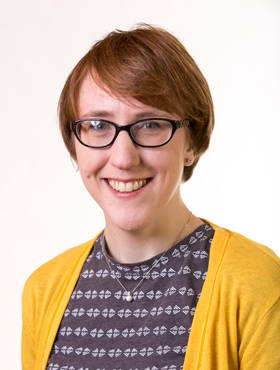 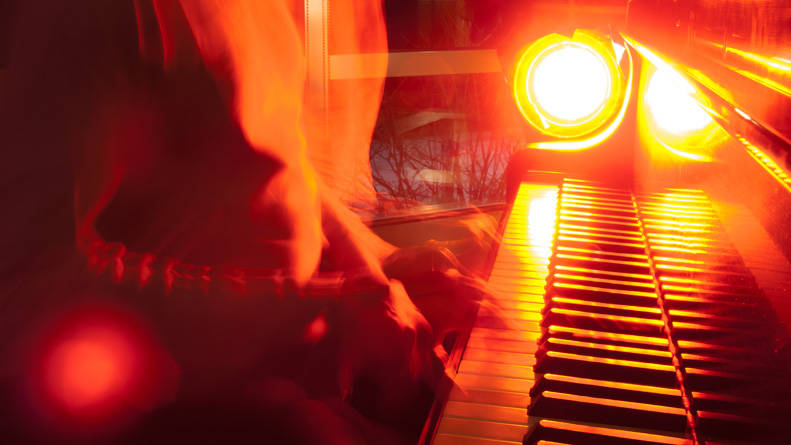 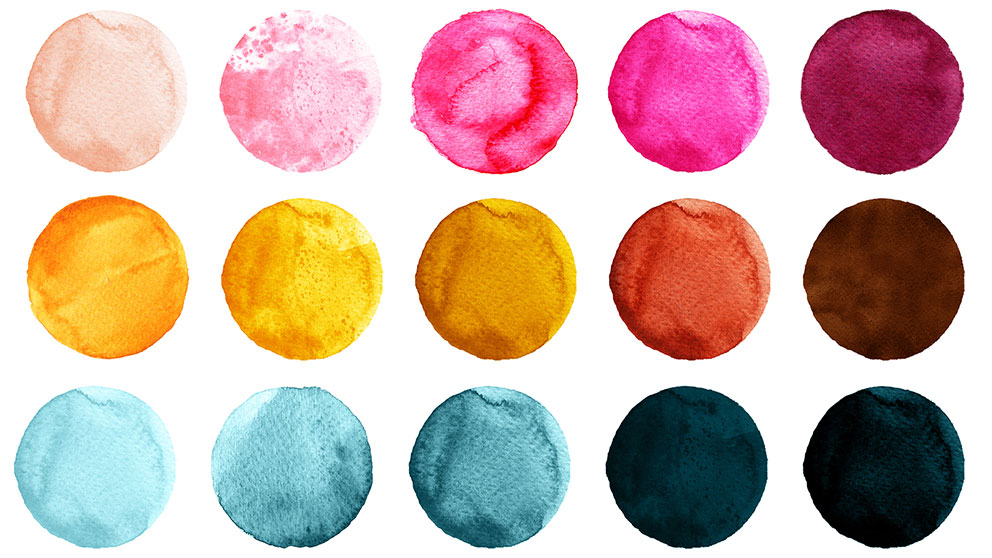