Can I Outrun Alzheimer's Disease? 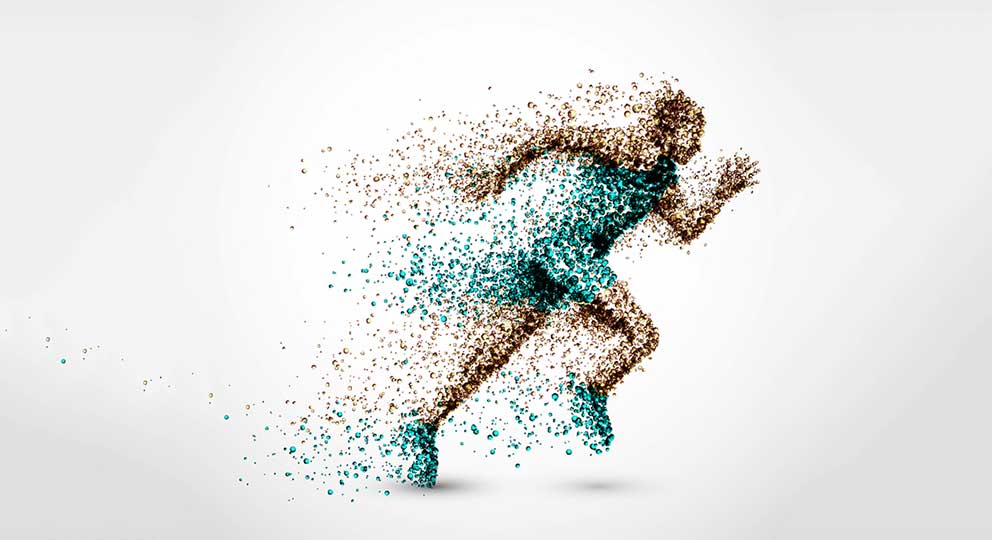 This is the third in a series about my genome sequence.  I’ve already posted about my general thoughts and a conversation with a genetic counselor. Below I focus on the ApoE4 gene, the one highly significant variant found in my sequence.

Is there anything — or combination of things — that could prevent me from getting Alzheimer’s disease?

I’m in the middle of a five-mile run on a warm, humid day in Bar Harbor with Gareth Howell, Ph.D. We’re discussing Alzheimer’s disease (AD), not a typical running conversation, but I’d warned him I might turn our run into a semi-interview. Given that we were running up a big hill and I was short of breath, I was happy that we’d steered the conversation in that direction so I could let him do most of the talking.

“No,” came the answer. “The mix of genetics and environment make it impossible to predict any one person’s result.”

Running is, of course, something that is thought to help at least delay neurodegeneration, so it’s fitting that we started by discussing the roles of environment and behavior in AD. But as has been seen in so many different contexts, even the most beneficial behaviors are far from a sure thing. “We’re talking populations, susceptibilities and probabilities,” adds Howell. “That said, there’s no reason not to do what you can to lower your disease susceptibility.”

Howell is on the faculty of The Jackson Laboratory (JAX) and studies neurodegeneration, with a focus on AD. There are few better people in the country to talk with about ApoE and AD susceptibility, so I turned to him after learning that I’m heterozygous for ApoE4, the variant that increases my risk for AD. He is investigating the relationship between exercise and diet and AD as well as gene variants associated with the disease. Through his research with mice, he’s found some very intriguing connections between some kinds of immune activity and AD susceptibility, as well as the role of vascular health and the integrity of the blood-brain barrier. It may all be deeply intertwined, as diet and exercise affect inflammation and vascular health in ways that depend in part on our genetics.

It’s a complicated equation, no doubt (and that’s not even mentioning the role cognitive activity may play, debunked “brain games” notwithstanding), and it’s still a guessing game at the individual level. “I have people tell me that exercise doesn’t seem to do much good; their uncle ran marathons for decades and still developed AD before turning 70, or something like that,” says Howell. “But it’s not a guaranteed preventative for individuals, it’s that at the population level it seems to have a positive effect.”

And diet may be important too. Ah, diet. I’m pretty good about getting regular exercise and I try to eat a lot of fish and vegetables, but I have a significant weakness for pastries and cookies. What’s more, I admit to Howell while patting my stomach, which has slowly expanded over the past few years, my cholesterol numbers tend to nudge over acceptable levels. “Yeah, your diet will have a more profound effect on your weight and metabolism than exercise,” he replies. “And high fat, high sugar diets promote inflammation throughout the body.”

Such inflammation plays a well-known role in atherosclerosis and cardiovascular disease, and it likely accelerates neurodegeneration too. So, evidence is accumulating that basic “healthy” habits benefit our brains as well as our hearts and waistlines. Will that added benefit get me to lace up my sneakers and eschew cookies more regularly now that I know about my ApoE4 though? Time will tell.

And what is ApoE anyway? It codes for apolipoprotein E, a protein produced in the liver that packages cholesterol and other fats and carries them through the bloodstream. ApoE is also produced by astrocytes in the central nervous system, cells that form the blood-brain barrier and provide nutrients to neural cells, including the delivery of cholesterol to neurons. Howell notes that mice with the ApoE gene knocked out develop extremely high cholesterol levels when fed a high-fat diet, and they don’t reap the neurovascular benefits of exercise. The protein comes in three major forms in humans, ApoE2-4. ApoE3 is the common “normal” form, while about 20-25% of the population are, like me, heterozygous for ApoE4. The least common variant, ApoE2, seems to have a mild protective effect against AD.

That much is known. Exactly what role ApoE plays in human AD is far more mysterious. If blood lipid levels were directly associated with AD susceptibility, that would make sense, but so far the connection remains unproven, and the ApoE4 variant has only a very modest effect on them. All of which makes Howell’s investigations of the bigger AD landscape so important.

“Did you have anything for TREM2?” he asks. “A rare variant—R47H—looks like it has a solid association with AD risk too.” TREM2 is a gene involved with inflammatory response, further bolstering the hypothesis of immune system involvement. Happily for me, a quick search of my sequence after the post-run shower reveals nothing untoward about my own TREM2 gene, though the R47H variant is annotated as pathogenic in the general gene search.

As we wrap up the run, it occurs to me that we haven’t even touched upon the traditional hallmarks of AD—the accumulation of beta-amyloid plaques and tau protein tangles. As I noted in a blog post a few months ago, the AD drug development success rate has been shockingly poor, and most have focused on reducing beta-amyloid aggregation. Ultimately, success with AD therapeutics and/or prevention likely depends on broadening the search to embrace a wider range of inputs and variables, as Howell is doing in his research. And moving forward, he will be working more and more to combine insights from human genomic data with specialized mouse models to accelerate research into how all the variables combine to cause AD. It’s a difficult challenge, but as the population ages and AD rates soar—the number of cases is projected to triple by 2050 in the U.S. alone—it’s a necessary one.

As for me, I won’t spend much time fretting about AD, but I’ll try to keep doing what’s gotten me this far. Or perhaps I’ll try for a little better. There’s a half marathon this fall that would provide a nice motivation boost for my running, and I do want to lose a few pounds. As for maintaining cognitive activity, keeping up with biomedical research works my brain plenty hard! So on the surface, all is well. On the other hand, I forgot to shave this morning—didn’t even think of it until I scratched my chin and encountered, to my surprise and mild dismay, day-old stubble. Clearly not all my synapses are firing at all times. Laughing off such absent-mindedness has gotten a bit more difficult post-ApoE4, I’ll admit, but it’s time for a jog today, and I’ll do better with the whole shaving thing tomorrow.

The repeated clinical trial failures of Alzheimer’s disease therapies based on clearing beta-amyloid have been discouraging, but new…