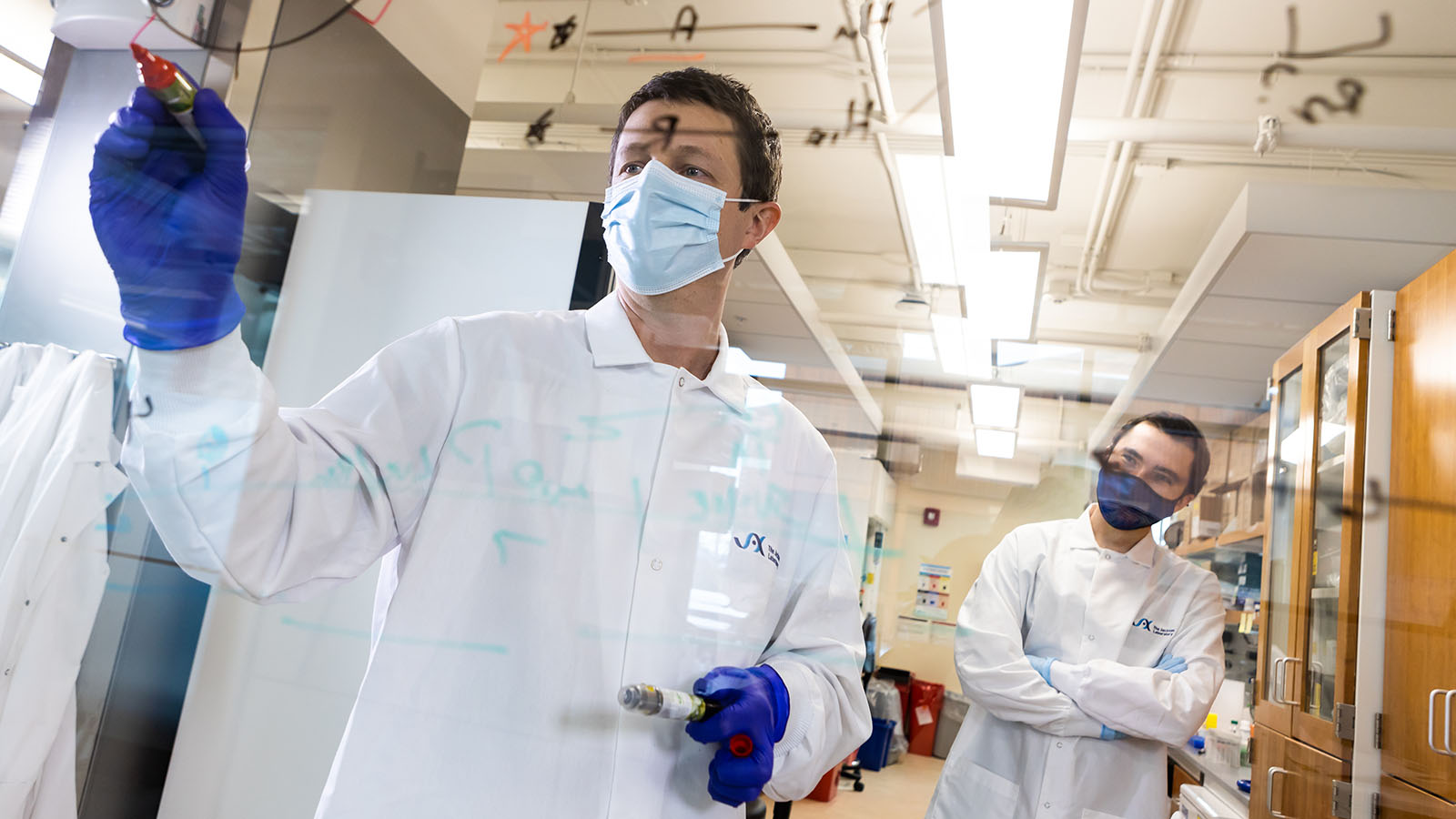 The Jackson Laboratory's Ryan Tewhey (l) in his lab with his staff. Photo credit: Tiffany Laufer

When  Ryan Tewhey, Ph.D.Identifying the precise genetic mechanisms for complex traits and disease risk Ryan Tewhey completed his postdoctoral research at the Broad Institute of MIT and Harvard University in 2017, he took a leap into the unknown by joining The Jackson Laboratory’s mammalian genetics faculty in Bar Harbor, Maine, as an assistant professor.

“The work that I wanted to accomplish was to advance our understanding of how genetic variants within the human population affect complex traits and risk for disease,” Tewhey says. “And I saw a need to use mouse models for that, something I had no prior knowledge about.

“So you could say I came up here to put myself in an unfamiliar environment, into a situation where I can learn from expert colleagues and make the most progress,” he says. “And that’s JAX.”

More than 98 percent of the genes in humans, mice and other mammals don’t code for proteins. Some of the non-coding regions of the genome are involved in regulation — turning genes on and off — and Tewhey develops new molecular tools to explore these regulatory regions.

Tewhey worked on one such tool during his postdoctoral work in the laboratory of Pardis Sabeti at Harvard University and the Broad Institute, improving a technique to precisely “barcode” minute fragments of DNA to track their role in contributing to diseases. By enhancing the technique, called the “massively parallel reporter assay” or MPRA, Tewhey and his colleagues could scan thousands of DNA variations to identify hundreds that affect gene regulation.

When Tewhey first came to JAX, he says, “our research program initially focused on understanding the precise regions within the human genome that impact complex diseases, such as type 2 diabetes and autoimmune diseases. And from there we moved to building mouse models to understand the physiological impact these regions have on disease processes. You can only truly achieve this goal in a model organism, such as the mouse.”

Tewhey describes his lab as “disease-agnostic,” focusing on the mechanisms of gene regulation as opposed to specific diseases. “So we collaborate with experts in various diseases, such as Michael Stitzel, Ph.D.(De)coding the regulatory landscape of human pancreatic islets and other metabolic cell types health and diabetesMichael Stitzel ,” a JAX associate professor who focuses on type 2 diabetes, as well as collaborators at University of Washington, Stanford University, The Broad Institute and other research institutions. One frequent collaborator is Steven K. Reilly of Yale School of Medicine. “Ryan is the best you could hope for you in a collaborator,” Reilly says, “impressively innovative, always generous, and easily intrigued by all types of scientific questions. From sequencing COVID genomes to investigating human evolution, my collaborations with Ryan have always resulted in more than the sum of their parts. He breaks that old adage on collaboration: ‘If you want to go fast, go alone; but if you want to go far, go together.’ If you want both, go with Ryan.”

Tewhey and his lab are achieving the landmarks of research-world success.  Understanding the non-coding genomeRyan Tewhey, Ph.D., is leading efforts to apply high-throughput analyses to understand both how non-coding genome regulation works and its many roles in disease.In a recent paper in the prestigious journal Nature Genetics, Tewhey and colleagues published their discovery of non-coding variants in the human genome that are associated with autoimmune disease, opening new possibilities for studying diseases such as type 1 diabetes, rheumatoid arthritis and inflammatory bowel disease

A round-trip scientific journey from Maine

For Tewhey, a bonus of coming to JAX was returning to his native state. He grew up in Gorham, Maine, interested in all kinds of science. “I was always exploring, I was an engineer, taking things apart and trying to figure out how they work.” By the time he entered the University of Maine’s flagship campus in Orono, he had decided on biology because it was “the most hands-on” of the sciences. He graduated with a double major in molecular and cellular biology and biochemistry.

He earned his Ph.D. in biological sciences at the University of California, San Diego, while conducting research in the laboratory of Nicholas J. Schork, Ph.D., at The Scripps Research Institute in La Jolla, and indulging his passion for surfing in his limited spare time. At Scripps Tewhey caught the attention of Eric Topol, the influential founder of the Scripps Research Translational Institute. “When I was a young grad student,” Tewhey recalls, “unsure of myself and carrying around that grad student imposter syndrome, Eric was the one to tell me I could accomplish what I set out to do. It really lit that fire in me.”

“Ryan is one of, if not the, most talented young scientists I have ever known or had the privilege to work with in my career,” Topol says. “A rare combination of attributes: exceptional brilliance, productivity and humility. He consistently (at Scripps Research, the Broad Institute, and JAX) takes on the most formidable and unmet challenges in life science, the ones that are daunting and that most people shy away from—and gets results!”

Following other research positions, including at the Genome Institute of Singapore, Tewhey returned to New England in 2012 to start the joint Harvard-Broad postdoctoral fellowship in the Sabeti lab. Sabeti is a Howard Hughes Investigator with joint appointments at Harvard University, the Harvard School of Public Health and the Broad Institute, and she is the front woman for the rock band Thousand Days. Tewhey says Sabeti’s influence on his work and career was huge: “She taught me how to run a lab, how to interact with people, and how to just be a good citizen within the science community.”

I wanted to expand my network and my exposure to different places, but joining JAX has allowed me to conduct the research I want to do and also come home.

Sabeti says, “One of the great highlights and pleasures of my career was to work with Ryan Tewhey. He's one of the most extraordinary scientists and human beings I've ever worked with — he is absolutely brilliant, inventive, rigorous and thoughtful. He is extremely innovative and follows this elegant methodical process to bring projects to perfect completion and true quality. With the standards Ryan sets, you don't think he'll ever achieve them, but he does, again and again.”

Besides being a “world-class” scientist, Sabeti comments, “he's just a really good person.” She says that when Tewhey left for JAX, “everyone, from his trainees to my management team to the janitorial staff, constantly said how much they missed him. That’s one of the many reasons I try so hard to keep my collaborations going with him. He's just one of those incredible humans whom you believe deserves every success that he gets.”

Tewhey has assembled a diverse team of researchers for his lab at JAX including Postdoctoral Assoicates,   Kousuke MouriI'm interested in non-coding regulatory sequence which relates to human disease and diversity.Kousuke Mouri , an expert in mouse biology and regulatory elements, and Rodrigo CastroRodrigo Castro , who obtained his Ph.D. in mathematics with a focus on deep-learning research.

“Kosuke and Rodrigo make an interesting contrast,” Tewhey says. “Kosuke has this amazing foundational knowledge of biology and genetics, and kept the lab going when I was on paternity leave a couple of years ago. Rodrigo is a mathematician and data scientist who came to JAX to learn biology, his unique perspective has been transformative for the group moving our research program to areas I never dreamt of prior to his arrival. I feel incredibly lucky to have the opportunity to work with both of them. Our research would not be what it is without their contributions.”

These days Tewhey has little time for surfing or other hobbies: He and his wife just welcomed a baby son, joining a set of two-year-old twins, a boy and a girl. “So it’s absolute chaos,” he says with a grin.

Tewhey says he had always intended to come back to Maine after studying and working on the West Coast and beyond. “I wanted to expand my network and my exposure to different places, but joining JAX has allowed me to conduct the research I want to do and also come home.”