The challenge of Omicron 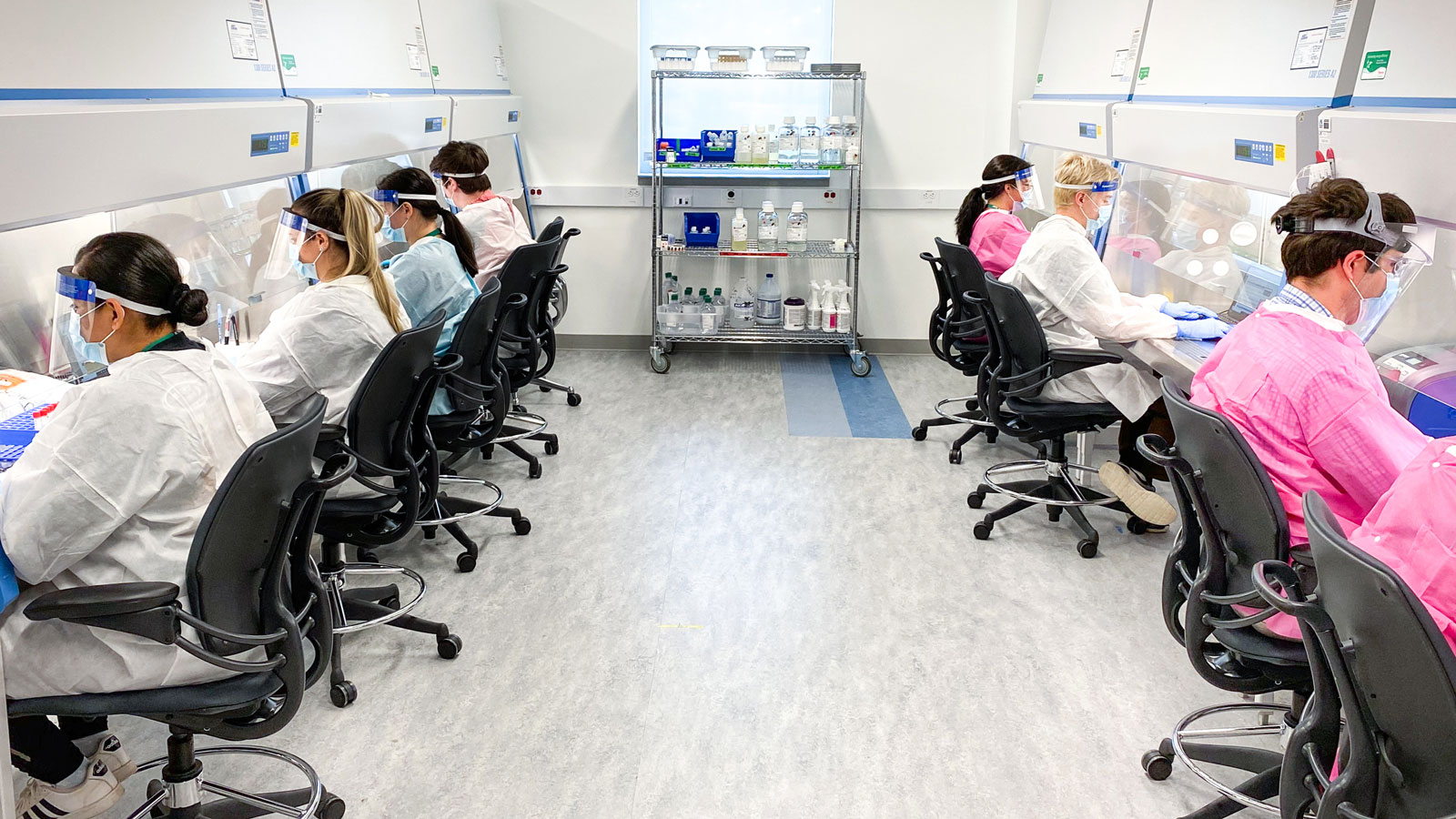 Technicians working in the CLIA Lab at The Jackson Laboratory for Genomic Medicine. JAX photo by Adam Mil-Homens and Mallory Ryan.

The latest COIVID-19 variant is here: Omicron. How did the variant show up in the United States and what does the future hold for this and other variants?

At the beginning of November I wrote about the state of the COVID-19 pandemic, the emergence of the highly transmissible Delta SARS-CoV-2 variant, and the potential for the pandemic to ease and SARS-CoV-2 to become endemic. The article noted the potential for new, more dangerous variants to emerge but ended on a slightly hopeful note, concluding “over time the situation is expected to improve.” Shortly thereafter, on Thanksgiving Day, reports emerged from South Africa about a variant that appeared to be moving through a highly populated province, Gauteng, with unprecedented speed. Soon named Omicron, the variant quickly spread around the globe, and it has become dominant in many regions within only a few weeks.

The breathtaking rapidity of Omicron’s spread has made broadcasting accurate information about it essential, but many things remain poorly understood. Preliminary reports based on early data and limited cases have led to conflicting messages, confusion and alarm. To add to the confusion, the best studies from countries with high case counts and effective surveillance—South Africa, the Netherlands, England—show differences between important data points, indicating that different population demographics and mitigation approaches, such as lockdowns and mask requirements, might affect Omicron’s impact. For example, people in South Africa are on average younger than those in Europe, and they have lower vaccination but higher prior infection rates. It will take time to figure out exactly what that means from a public health standpoint, but Omicron may produce variable outcomes in different countries.

What is Omicron and where did it come from?

Previous SARS-CoV-2 variants such as Alpha and Delta have differed only slightly, particularly in the all-important Spike protein. The virus’s ability to infect humans depends on the Spike protein’s ability to bind to a specific cell surface receptor, ACE2, and it was thought that large differences would hinder that binding process. Omicron turned that assumption on its head and raised alarm bells when it was first detected. It carries a startling number of Spike mutations—36 is the number most frequently cited—seemingly without impairing its transmissibility. Indeed, it appears to be more readily transmitted than Delta, with R0 estimates exceeding seven (similar to mumps), and more likely to cause “breakthrough” infections in fully vaccinated people. A few studies are emerging regarding Omicron’s virulence, ability to infect cells in the upper and lower lung, and other properties, but more data is needed for definitive answers. One thing is quite clear already; however, a variant that spreads as efficiently as Omicron is cause for serious concern.

Omicron’s number of mutations were not just an unpleasant surprise, they also complicate the task of tracking SARS-CoV-2’s evolution. Many experts predicted that the next variant to emerge would be derived from Delta, which had been the dominant strain for several months. Omicron, however, is thought to have originated more than a year ago. So, then, where has it been, and how did it emerge so suddenly? No one knows for sure, but there are three prominent theories. One, it’s possible that it changed over time in a very isolated population that has little or no interaction with other people, until an infrequent meeting passed it to someone who brought it to the larger population. Alternatively, it may have evolved in a person who harbored a SARS-CoV-2 infection for a long time, such as an immunosuppressed patient. Finally, it’s possible that it developed over time in an animal reservoir of some kind—SARS-CoV-2 infections have been detected in a variety of animals since it first emerged from bats, including mink, deer and cats—then jumped back to humans.

Omicron’s arrival in the United States

Perhaps the most alarming Omicron infection characteristic has been its doubling rate wherever it has been found. South Africa, the Netherlands and the U.K. all observed Omicron case rates doubling every 2-3 days, which far outpaces even Delta. At that speed, a dozen cases become thousands within just a few weeks, and that scenario has played out around the globe. One of the best SARS-CoV-2 surveillance programs in the U.S. is in Connecticut, where JAX helps with the sequencing, and it looks like it’s following a similar trajectory. Full sequencing data lags a little behind PCR results, so as reported on December 23, the sequenced samples from early December show Delta still dominant, with 744 out of 843 cases (88.3%). The other 99 cases were all Omicron, however, showing it had gained a foothold. Three weeks later, using S-gene target failure data from PCR testing—in which the spike gene is not detected due to a specific deletion—the tracking team has seen that number reversed, with 88% probable Omicron results from PCR tests performed on December 28, increasing to more than 90% during the first week of January. As full sequencing results become available, they are almost certain to confirm these findings. While the estimated doubling rate is a little slower in Connecticut than reported elsewhere—3.4 days—it is still much faster than Delta’s estimated 10.9 days.

The speed with which Omicron spreads means that the case counts explode before any solid data can be gathered regarding disease severity and deaths. One potentially positive sign out of South Africa is that people diagnosed with Omicron have been much less likely to be hospitalized than those with Delta, and early indications show a similar trend in the U.K. There have also been studies showing that Omicron may have a less efficient cell-entry mechanism than previous variants, and others showing that it has difficulty entering deep lung tissue in culture. The findings have to be viewed with caution when it comes to how Omicron will affect people in the United States, however. Many of the “mild” cases tracked thus far have been in those with partial prior immunity from vaccination or previous infection, and/or in people under 40, the age group least susceptible to severe disease. As Omicron continues to spread in our area, infections in elderly, vulnerable and/or unvaccinated populations are being monitored closely.

What does the future hold?

After nearly two years of the pandemic, it’s both a little surprising and rather discouraging to face so many unknowns yet again. But Omicron has changed the situation. Even as evidence is mounting that Omicron-caused COVID-19 is less severe in many people compared to prior variants, the sheer number of cases is leading to increased hospitalizations throughout the U.S. The fact that Omicron causes more breakthrough infections in fully vaccinated and even boosted people than previous variants has led some to question the value of vaccines, but they remain essential. In fact, boosters provide protection from Omicron that is only slightly less than that provided by two vaccines for prior variants. Vaccines and boosters therefore continue to greatly reduce disease severity and the need for medical care, while those without vaccinations are still susceptible to serious disease and complications from Omicron, contributing to a growing pressure on our already stressed healthcare systems.

Everyone wants the pandemic to end and to return to the carefree interactions we previously enjoyed, but a recalibration is needed with Omicron. The well-worn admonitions to wear masks, avoid all large gatherings and most indoor ones, and test regularly if at all possible are even more important at this time. Will Omicron peak and case numbers fall quickly in the coming weeks and months? That pattern has been observed in other countries, so there’s reason for hope, but the predictions for the U.S. vary. A lot of epidemiology work involves hoping for the best but planning for the worst, and until we know more about what we face, it rings true today.

Update (January 25): Omicron case counts both in the U.S. and around the world continue to be very high. Nonetheless, there are positive signs that they are falling in multiple areas. In the U.S., states like New York that were hit hard in the initial Omicron surge are seeing notable decreases from their peak new case numbers. While many regions of the country are still seeing increases, many experts are cautiously optimistic that they will begin falling country-wide within the next three weeks.

At the same time, there’s a variant of Omicron, BA.2, that bears watching. It’s more difficult to track than BA.1, the original Omicron variant, as it lacks BA.1’s S-gene target failure deletion and cannot be readily identified via PCR testing, but data are beginning to emerge. The first Connecticut case was detected in a sample obtained on January 8, with about 100 cases identified thus far nationwide. It’s spreading quickly in Europe, however, and it may be even more transmissible than BA.1. On the other hand, its spike receptor binding domain, an important immunogenic region, is very similar to BA.1. Therefore, immune protection from BA.1 will likely also protect against BA.2. It’s still too early to predict how much impact BA.2 will have, but it will be followed closely.

What is the status of the SARS-CoV-2 variant Delta now? What other variants might emerge? And when can we finally move forward into the "new…