Can we win the battle against late-onset Alzheimer's disease?

When looking at all the consequences of aging, neurons' dysfunction and death associated with cognitive function are among the most devastating. The resulting dementias, including Alzheimer's disease, are calamitous for patients, families and society. Experts predict that the number of cases will more than triple over the next 30 years, and care costs in the U.S. could reach trillions of dollars annually within the same time frame. The need to find an effective therapy or, better yet, preventative treatment, is growing.

Unfortunately, Alzheimer's disease has proven to be challenging to address clinically. While there are behaviors and wellness strategies that statistically reduce risk at the population level, no preventatives or therapies have been found for those at high risk or who have the disease. There are many reasons why Alzheimer's disease research discoveries have been so difficult to translate to the clinic. But today's researchers are bringing new perspectives and vastly more powerful research methods and tools to address the problem. In a field that has seemed to quell optimism at every turn, there are now reasons for hope for doctors and their patients.

Why has Alzheimer's disease research been such a troubling field? At a high level, it's analogous to the situation in a mystery novel first published nearly 100 years ago, in which writer Dorothy Sayers coined the phrase "clouds of witness." Instead of clues being hard to find, her murder scene had an overabundance of clues. There were also so many people tromping around and through the murder scene just before and after the untimely death that it was tough to determine what actually happened. Alzheimer's disease presents a similar challenge. The function of the human brain and how it is compromised with age is such a complex combination of genes, behaviors and other factors that add up over the decades. It's arduous to determine what actually tips the scales to disease and large-scale neuron death in some people. And why other people, you'd think would be at high risk, avoid cognitive decline and retain regular function as they age.

In fact, until recently, Alzheimer's disease research was reductionist by necessity, focusing on one narrow area of inquiry, such as a single gene at a time. As recently as 15 years ago, preclinical Alzheimer's disease research was largely limited to working with what was known: a few rare, highly penetrant genetic mutations that cause early-onset Alzheimer’s disease (usually manifesting in patients between their 30s and 60s). Therefore, researchers worked for the most part with mutations in three genes—APP, PSEN1 and PSEN2—and their associated pathways. Unfortunately, while there were many discoveries regarding the specific forms of Alzheimer's disease caused by these mutations, they have not proven successful in guiding therapy development.

Late-onset Alzheimer's disease (known as LOAD), which affects people in their late 60s and after, is far more common, comprising more than 95% of cases. Unfortunately, LOAD's genetic complexity, environmental components, and long, pre-symptomatic early stages are extremely difficult to accurately model in an experimental system. But recently, particularly over the past decade, the ability to accommodate such complexity has proliferated. Detailed patient data, including molecular traits that help researchers identify genetic contributors, is also accumulating at an unprecedented rate. Combining these resources promises to be a powerful platform for new research inquiries and, hopefully, therapeutic discovery. 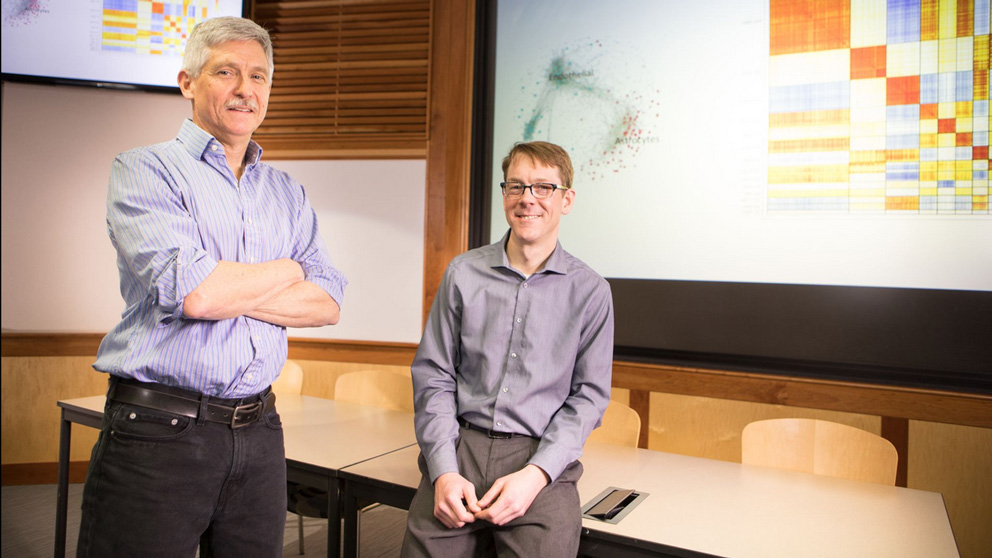 The physical hallmarks of Alzheimer's disease are the accumulation of abnormal proteins in neurons, specifically beta-amyloid plaques and tau tangles. The genetic mutations that cause early-onset Alzheimer's disease are associated with dysfunctions that lead to rapid beta-amyloid accumulation. This was the near-exclusive focus of therapy development efforts for many years. But removing beta-amyloid or blocking its accumulation is insufficient for improving cognition or slowing disease progression. Now, investigations into the genetics underlying LOAD risk have provided many other areas to explore.

Immune response and inflammation in the brain are high on the list, and the role of microglia (the central nervous system's immune cells) is subject to intensive study. Our immune activity may work in concert with vasculature dysfunction, such as a "leaky" blood-brain barrier that allows macrophages from the general circulation into the brain. The clues from behavioral risk factors—a lower risk with vigorous exercise and a healthy diet, a higher risk with sleep dysfunction—also point to disease mechanisms beyond simple amyloid accumulation. Some of them likely begin well before cognitive decline can be detected. Learning how to spot these so-called "biomarkers" of disease early is the key to finding preventative treatments. Finally, researchers can now investigate how different genetic backgrounds can increase or decrease susceptibility to LOAD. No two people are identical, and evidence is emerging that LOAD has different mechanisms in different patients.

JAX Center for Alzheimer's and Dementia ResearchTo understand disease mechanisms and ultimately develop effective therapies for AD, it is essential we apply state-of-the-art approaches to generate the next generation of more predictive animal models and make these models widely available to the AD research community. alzheimers-disease-center

JAX researchers are forging ahead in several areas to expand Alzheimer's disease knowledge and research capabilities. A significant step forward was the formation of MODEL-AD, a collaborative research center established in 2016 to develop and validate mouse models to improve LOAD research. The JAX effort is led by the complementary research programs of co-principal investigators Gareth Howell, Ph.D., Gregory Carter, Ph.D., and Michael Sasner, Ph.D., in collaboration with clinical researchers at Indiana University and drug development experts at the University of Pittsburgh and a bioinformatics core at Sage Bionetworks.

In his laboratory, Howell investigates many aspects of LOAD, with a particular interest in microglial contributions and how they differ in mice with different background genetics. He also studies how diet and exercise contribute to disease in relation to how they affect immune and vascular health in the brain. Sasner focuses on mouse model development and distribution, validating their relevance to human disease and providing resources for the global LOAD research community. Carter, a computational biologist, mines human patient data for genetic associations with Alzheimer's disease to guide mouse model development. He is now also a principal investigator in the TREAT-AD program, seeking to uncover genetic susceptibilities and disease mechanisms targetable by therapeutics.

A research program led by Catherine Kaczorowski, Ph.D, is focused on a different aspect of LOAD — resilience. What is it about some people's genetics that allows them to avoid neurodegeneration? Kaczorowski has developed a population of genetically diverse mice. She works with them to see how their genetic backgrounds affect their susceptibility to disease when they carry a mutation that causes Alzheimer's disease in a particular mouse strain. In the genetically diverse population, some of the mice exhibit little or no neurodegeneration, and she is isolating the genes that contribute to their resilience. Another area of inquiry is led by Kristen O'Connell, Ph.D., who is particularly interested in the intersection of diet, energy balance and brain function. Obesity and associated chronic inflammation have been strongly implicated in LOAD. Understanding the mechanisms may provide insight into behavioral and environmental contributors to disease. O'Connell is also interested in how another risk factor that has recently emerged — poor sleep patterns — may contribute to disease susceptibility. 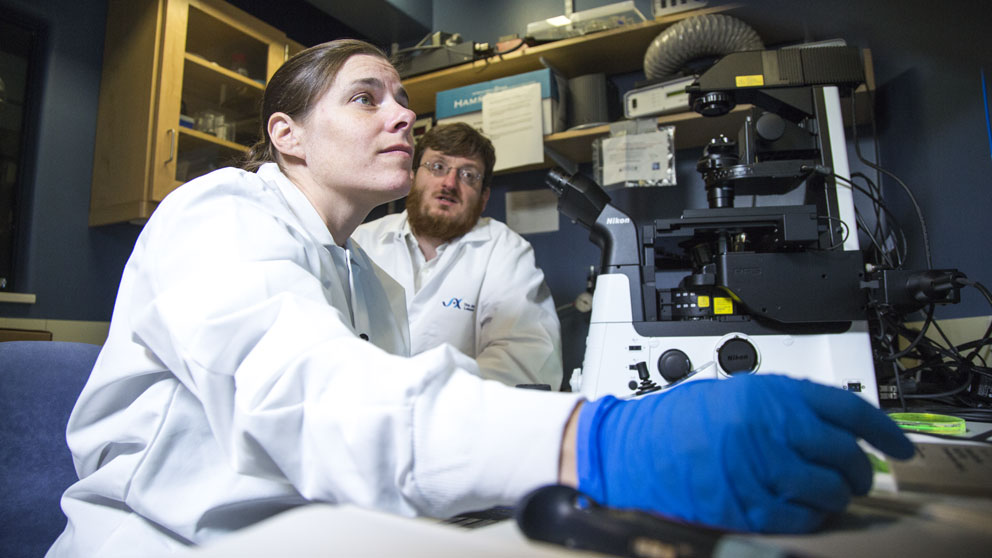 A growing need, a building hope

Moving forward, it is essential to combine human patient data with model organism research to better understand disease progression and develop improved mouse models of LOAD. The ability to embrace genetic diversity and probe deep into the molecular mechanisms of disease also brings new possibilities to LOAD research. JAX is leading a fresh push in the field, and the results have the potential to benefit millions in the years ahead.