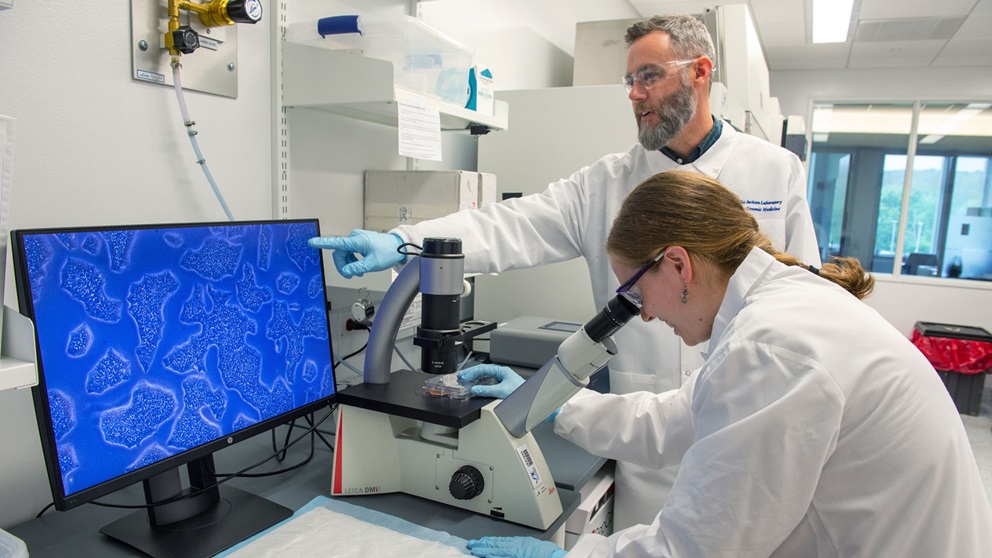 The biomedical research community is racing to untangle the genetic mechanisms of Alzheimer’s and other deadly neurodegenerative diseases. A grant from the Chan Zuckerberg Initiative will expedite the distribution of The Jackson Laboratory’s powerful new research resource — a large collection of stem cell lines that carry the genetic variants of patients with neurodegenerative diseases.

Thanks to human induced pluripotent stem cell (iPSC) and gene-editing technologies, it’s possible to derive every kind of brain cell type, insert dementia-related genes into them and study them in culture. In 2019,  Modeling Alzheimer's disease in cultureThe National Institutes of Health have contracted with a JAX team led by Bill Skarnes, professor and director of cellular engineering, to generate a collection of engineered iPSC brain cell lines for the National Institute on Aging. the National Institute on Aging contracted with JAX to develop a collection of more than 400 engineered iPS cell lines representing Alzheimer's disease and related dementias, establishing the iPSC Neurodegeneration Initiative (iNDI). iNDI-Plus was launched with  New tools for the Alzheimer’s research communitySecond NIH contract to JAX will expand cell lines for studies of Alzheimer’s disease and related dementias.a second NIH contract in 2020 to generate additional alleles. These iPS cells are available to the scientific community as an open resource, and as a tool to characterize how mutations change fundamental biological properties of disease-relevant cell types.

“CZI has stepped in to provide this funding that will enable JAX to set up, for the first time, a distribution activity around engineered iPSC models,” says JAX Professor Bill Skarnes, Ph.D.Bill's laboratory is currently exploiting new genome-editing technology to study gene function and to model disease in human stem cells.Bill Skarnes, Ph.D., who leads the iNDI projects in collaboration with NIH investigators. “Normally an established distributor of iPS cell lines will, in order to recover the cost of expanding the clones before sending them out, charge quite a lot of money for access. CZI is providing funding to establish this resource at the Bar Harbor, Maine, campus of JAX. This will greatly facilitate our ability to offer these cell lines to the scientific community.”

The JAX Mice, Clinical & Research Services arm of JAX is well known in the scientific community for its long history of distributing genetically defined laboratory mice, cryopreserved embryos and other genetic resources to researchers around the world, as well as making its platform technologies, such as genetically engineered mouse model development, reproductive sciences, and in vivo pharmacology, available to the scientific community. JMCRS General Manager David Grass, Ph.D., will head the iPSC cell line distribution under the one year, $1,138,796 grant from CZI.

“Bill’s team is creating the genetically modified iPSC cell lines for this resource,” Grass says. “Our team will receive them, grow them in sufficient quantities and conduct quality control reviews. We’re also creating a web portal that researchers can access from the JAX website, where they can browse through the catalog of gene-edited lines and find data on quality assessment and protocols for each line.”