As children, Bernard and Lusia Milch survived the evil of the Holocaust, setting them on a life path defined by determination to survive, help others and give back. After another kind of darkness — that of dementia — fell upon Bernie in the final years of his life, Lusia was determined to shine a new light of hope through the power of philanthropy. 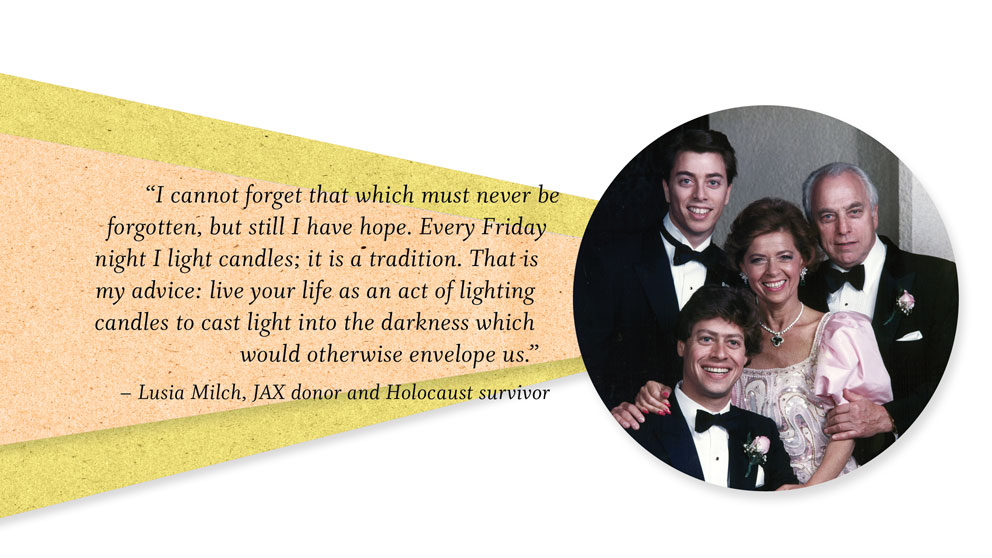 Lusia says that she is motivated to give charitably to organizations like JAX because philanthropy is, at its most essential, a response to the brutality she and her family experienced. She recently   Three new endowed chairs to lead Alzheimer’s, addiction, cancer, and computational biology researchThe Jackson Laboratory (JAX) has appointed three faculty members to endowed chairs in order to further research into Alzheimer’s disease, addiction, cancer and computational biology.donated $1.5 million to JAX in order to establish The Bernard and Lusia Milch Endowed Chair, named after her late husband and held by Associate Professor and Computational Biologist Gregory Carter, Ph.D.Develops computational strategies using genetic data to understand complex genetic systems involving multiple genes and environmental factors.Gregory Carter , Ph.D.

Not only is the Milch family impressed by the science and discoveries made at the Laboratory, but the sense of entrepreneurship, resiliency and transformative nature at JAX speaks to their history.

Lusia and her late husband, Bernard Milch, arrived in the United States as immigrants after World War II. Penniless, the two met in New York City where they built a life and their own business together. Lusia’s son and member of the Board of TrusteesThe Board of Trustees for The Jackson Laboratory with bios and photos.JAX Board of Trustees Neal Milch, J.D., explained that his family’s philanthropic instincts come from the basic support that his family received as immigrants. Their desire to give back is also inspired by the atrocities they faced during the Holocaust.

Lusia was only a child when she went into hiding and miraculously escaped a Nazi death squad while her sister and mother were caught and killed in the street. She recalls seeing the Nazis’ barking dogs just inches away from her through small cracks in a wall behind which she was hiding. “Philanthropy is a refutation of hatred, violence and insanity. I was helpless then; I am not helpless now,” says Lusia.

In his youth, Bernard was a risk taker, and teamed up with his brother David to steal bread by moonlight from Nazi food trucks. One night, the brothers were caught and due for execution the next day. That night, in an effort to escape, Bernard was able to get away but David was caught and killed. Neal recalls his father calling out to him decades later, in an anesthesia-induced delirium following a surgery, “We need to warn David that the Nazis are coming!” All those years later, Bernard was still trying to save his brother. For the Milch family, these stories are never far from their minds.

Improving humankind through the triumph of the human spirit

Neal was recruited to the JAX Board of Trustees for being a self-proclaimed “science geek.” Trustee Emeritus David D. Elliman was on the Board at the time and inspired Neal to become involved with JAX, citing it as an organization on the cusp of transformation and with great promise. “David was exactly right!” says Neal.

As Neal grew more familiar with the Laboratory, he shared his knowledge and the work of JAX scientists with his mother. The family admires the agility, focus and innovation that the Laboratory and JAX® Mice, Clinical and Research Services offers. “The combination of deep mammalian genetics and human genomics expertise, burgeoning data sciences, and JMCRS firepower is unique,” Neal explains. “It’s important to me ... I’m a better person in my own eyes as a consequence of my involvement.”

Lusia finds value in JAX’s entrepreneurial instincts, which she sees as an aspect of the survival methods that got her family through the war. She says although the context is different, “an organization that can adapt, change, transform and thrive speaks to our family values and experiences.”

For these reasons, Lusia worked with Neal and  Edison Liu, M.D.Conducts research focused on the functional genomics of breast cancer through an exploration of the entire genomic space.JAX President and CEO Edison T. Liu, M.D., to identify where they could make a positive impact on the Laboratory.

Later in his life, Bernard suffered from dementia, likely due to mini strokes and the extreme physical and psychological trauma he faced early in life. “It was a challenge for us to navigate,” Neal says. “To witness a powerful man, a survivor who built a very successful business, slowly deteriorate is tragic.”

“I cannot forget that which must never be forgotten, but still I have hope,” Lusia says. “Every Friday night I light candles; it is a tradition. That is my advice: live your life as an act of lighting candles to cast light into the darkness which would otherwise envelope us.”

Alzheimer’s disease is an age-related neurodegenerative disease affecting more than five million Americans. It is also the leading cause of dementia among people age 65 and older and ranks among the top six causes of death. The disease is complex and involves many different genetic deviations and interactions.

Enter computational biologist Gregory Carter, Ph.D.Develops computational strategies using genetic data to understand complex genetic systems involving multiple genes and environmental factors.Greg Carter and team, who are on a data-driven quest to identify which genetic variants are most likely to trigger Alzheimer’s disease. From trillions of data points generated by analyzing human genomes at the most basic levels, Carter is using a new, powerful mathematic approach to identify biomarkers of Alzheimer’s disease, before symptoms emerge.

The ability to address neurodegenerative diseases with innovative technologies is what drew Lusia and Neal to supporting Carter’s research. Lusia says, “Supporting research at JAX and establishing a chair has been very satisfying, even more so than I expected.”

This newly endowed chair will enable Carter to accelerate his work examining disease across multiple dimensions to empower researchers around the globe. Neal says, “If in some small measure we can be helpful in the quest to develop understanding and therapies, then we will have lit a candle to illuminate darkness.”