Muneer Hasham is working to improve the odds of success in one of the most difficult drug development areas of all: cancer. With NCI support, Hasham is using advanced genomic engineering methods and genetically variable mouse populations to expand the capabilities of the patient derived xenograft (PDX) mouse program. PDX is an experimental platform that has already provided a large step forward for preclinical cancer research. Now, Hasham will make it possible for PDX research to capture a range of responses to treatments across a wide range of genetic backgrounds, improving the ability to assess therapeutic efficacy and response variability before beginning human clinical trials. 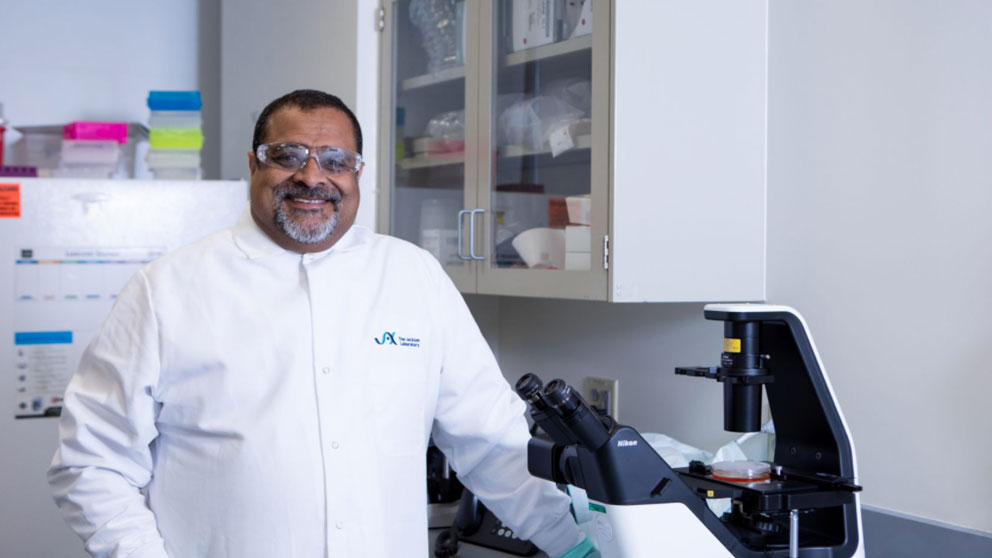 Have you ever heard of pharmacokinetics?

Pharmacokinetics is the study of the time course of drug absorption, distribution, metabolism, and excretion. Before any drug is even able to enter a clinical trial, its pharmacokinetics must be thoroughly tested and found to (potentially) work in human patients. And it’s only one component of the process of bringing a “candidate” compound from the laboratory to the clinic.

It’s no wonder then that developing and testing a drug is a long, hugely expensive road with a low probability of success. The progression from in vitro (usually cell culture) to in vivo (model organisms such as mice, in which said pharmacokinetic studies are done, among others) to a human phase I clinical trial is arduous and multi-faceted. It’s therefore imperative that the experimental work provides the greatest possible chance for the drug to work in humans.

Improving the odds of success in one of the most difficult drug development areas of all—cancer—is the goal of Muneer Hasham, Ph.D.Wide array of research interests includes infectious diseases, immune disorders and cancer pathogenesis. Muneer Hasham , who is the Study Director for Scientific Services at The Jackson Laboratory (JAX). Estimates vary, but recent research indicates that the overall success rate for all drugs in the clinical trial pipeline is roughly one in eight. For cancer that rate falls to one in 25, or even lower. The complexity of tumors and the host tissues in which they grow makes them very difficult to target and to treat.

In the past, that complexity was largely unaccounted for in the preclinical experiments. Hasham is looking to embrace it.

“Are you looking to develop a drug that can be taken orally?” he asks. “We know that when you put something in a mouse’s mouth, what happens to it is different between one mouse strain and another. And it certainly differs between people. You simply can’t capture that genetic variability if you use a single mouse strain for testing.”

With the support of a recent three-year, $1.27 million grant from the National Cancer Institute (NCI), Hasham is intent on expanding the capabilities of a particularly important cancer research platform: patient derived xenograft (PDX) mouse models. PDX models are made by acquiring human tumor tissue from patients and implanting them in immunocompromised mice. Human tumors have some important differences from those in mice, so the capability of studying actual patient tumors in vivo represents a big step forward. These mice can also be engrafted with human immune cells and tissues to mimic the immune response in people, another crucial component underlying cancer therapy response.

PDX models have had limitations, however.

“The PDX platform was developed with an immunocompromised strain (known as NSG) that worked very well for the purpose,” says Hasham. “But it’s just one strain. It doesn’t capture variable responses from variable genetics. And decisions are made based on whether a therapy works or doesn’t work in NSG without seeing the range of responses across different genetic backgrounds.”

Hasham will work with different inbred and wild derived mouse strains, including Collaborative Cross (CC) and Diversity Outcross (DO) mice, two genetically variable mouse populations. CC mice are inbred but carefully crossed to maximize genetic variability between strains, while DO mice are outbred and mimic human genetic diversity. He will use genetic engineering and pharmaceutical protocols to immunosuppress the mice so that they can engraft human tumors and will track the variability of tumor growth and therapeutic response. His early results already indicate that the work will provide important insight.

“We’ve had a lot of success engrafting patient tumors in NSG mice, but there are ones that just don’t engraft,” he says. “The exact reasons why aren’t clear, but it can be that the systemic environment in NSG just doesn’t work for some tumors. But now, if a tumor doesn’t engraft in NSG, we can try a lot of different strains to see what happens. Our preliminary data indicates that there are significant engrafting differences between strains.”

“Nobody has touched this before,” says Hasham. “I went to the NCI and said we have all these mice with variable genetics, so how can we keep testing compounds and predicting efficacy and safety with only one strain? But in the end you have to have the expertise and resources to do it.”

It’s a task that Hasham is eager to take on. Initially, his work will improve the PDX platform and maximize the knowledge that can be gained from patient tumor samples. Ultimately, he intends that to be just the beginning.

“We’ll be able to use the diversity platform to make preclinical drug testing much better and capture the effects of different genetic backgrounds,” he says. “But creating it is a BIG task. And the only place it can be done at this time is JAX.”