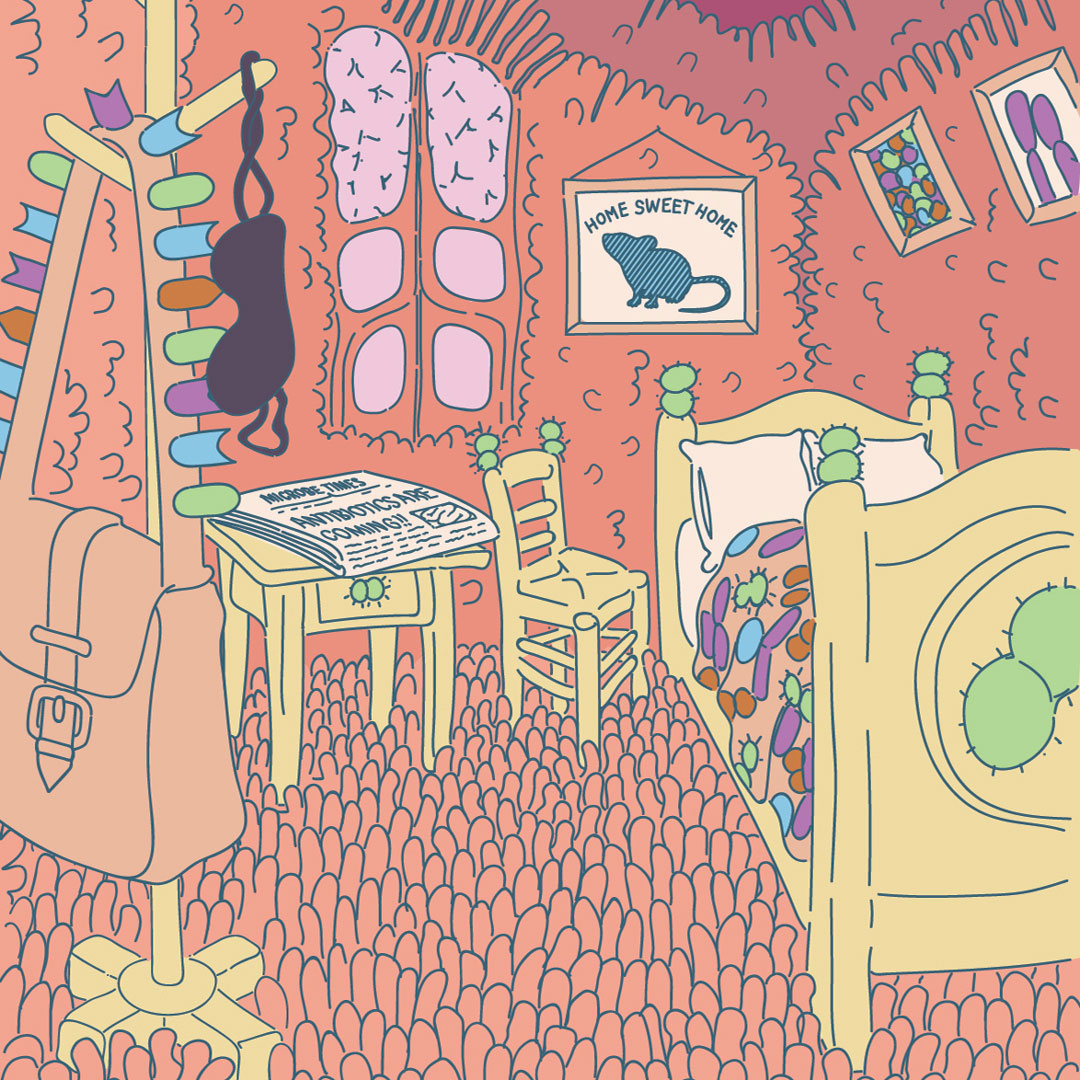 The presence of Odoribacter in the gut alters sleep patterns differently in mice depending on their genetic background.

You do all the right things to get a good night’s sleep: keep a consistent bedtime, turn off your screens early, keep the bedroom temperature down, etc. Beyond your control, however, are your genetically determined sleep patterns and, possibly, the interaction of your genes with certain microbes in your gut.

The abundance of a particular gut microbe, Odoribacter, alters the sleep behavior of mice, a Jackson Laboratory (JAX) research team has shown. More significantly, the microbe’s effect on sleep varies depending on the genetic background of the mice.

As addiction researchers, we're interested in sleep because it's been shown that shift workers, and others whose sleep patterns are regularly disrupted, are more predisposed to some psychiatric disorders that often occur with addiction.

The research, published in the journal Genetics, points to a powerful new way to sort out the incredibly complicated functions and interactions of the gut microbiome with the genetics of the host.

Picture a yearbook from a big high school, with 3,800 students. Just by paging through the photos in the book, could you tell which kids are in the service club and which ones vandalized the school? Which kids were friends, which kids were frenemies? Which ones are smelly? Now replace the kids with microbes and multiply by a billion, and you have an idea of what it takes to understand the  When good bacteria go bad… our bodies can turn against us.It is a new frontier in human health: Revealing the powers of our own microbes to fundamentally change our understanding of diseases of all kinds. microbiome and how it influences health and disease through complex networks of host genetics, genomics, microbes and environment.

“Most studies of gut microbiome and disease have basically produced lists of microbes in people with a disease,” says JAX Professor Elissa Chesler, Ph.D.Researches the genetics underlying behavior and identifies the biological basis for relationships among behavioral traits.Elissa Chesler, senior author of the study and director of the JAX Center for Systems Neurogenetics of Addiction. “It's hard to tell whether the host environment is selecting for that microbe, whether colonization with that microbe is influencing the host environment, and how the disease processes are merging.”

To deal with this “chicken-and-egg problem,” as she calls it, her team turned to examining the impact of host genetics through the powerful tool of genetically varied mouse populations.

Chesler was at Oak Ridge National Laboratory in 2004 when she teamed up with Gary Churchill, Ph.D.Employs a systems approach to investigate the genetics of health and disease and complex disease-related traits in the mouse.Gary Churchill of JAX and dozens of other leading laboratory mouse experts around the world (known collectively as the Complex Traits Consortium) to devise the Collaborative Cross: a mouse population established with eight different founder strains, including standard inbred strains but also some wild-type mice. The cross yields populations with tremendous genetic diversity. Sequencing the DNA of each animal allows the researchers to peg physiological and behavioral characteristics to specific genetic variants.

Chesler’s group at Oak Ridge conducted a wide-ranging study correlating genetic variation among Collaborative Cross mice with the animals’ microbiome, physiology and behavior. Relocating her program to JAX gave her access to a broad team of experts and mouse resources necessary to unpack this complex problem, she says. The study revealed a relationship between the abundance of Odoribacter and sleep behavior, regulated by a genetic variant on chromosome 7.

Jason Bubier, Ph.D.Integrating behavioral data across species and making it computable and accessible to the research community.Jason Bubier, a research scientist in the Chesler lab, focuses on the microbiome link to  Breaking the cycle of addiction, a deepening and deadly public health crisis.Addiction is a chronic illness, with genetic, environmental and social aspects. JAX researchers are at the forefront of understanding the genetic factors involved in individuals’ vulnerability to addiction. addiction. “To test this relationship,” Bubier says, “we looked at a mouse model of obesity and diabetes,” known as Leprdb or DB, “that was already known to have very fractured sleep.” These mice tend to sleep at inappropriate times and in broken-up bouts, instead of the normal mouse sleep routine of one solid block during daylight hours.

“We asked a very simple question,” Bubier says: “If we perturbed the microbes in the DB mice, do we see a restoration of normal sleep? And yes, we do.” By knocking out Odoribacter by the use of antibiotics, he says, the DB mice show “a really restored, normal sleep cycle comparable to control mice.”

(Bubier cautions that antibiotics should not be considered a sleep aid for patients with diabetes. “There are lots of reasons why you wouldn't do that.”)

“As addiction researchers,” he says, “we’re interested in sleep because it's been shown that shift workers, and others whose sleep patterns are regularly disrupted, are more predisposed to some psychiatric disorders that often occur with addiction, such as depression and bipolar disorder.”

Incidentally, Odoribacter’s name comes from its rod shape (“bacter”) and its link to bad dog breath (“odor”) — some strains are found in the mouths of dogs with gum disease.

Chesler says that the systems genetics approach her team used in this research provides a solid experimental strategy for scientists to explore those previously elusive relationships among host, microbe and disease, revealing potential disease triggers and opportunities for therapeutic intervention.

Sleep is “fundamental,” she adds, “and we need to get enough to discover what it’s about.”

New mouse models are key to designing better therapeutic interventions for people at risk for addiction.