Tipping the balance in the fight against cancer 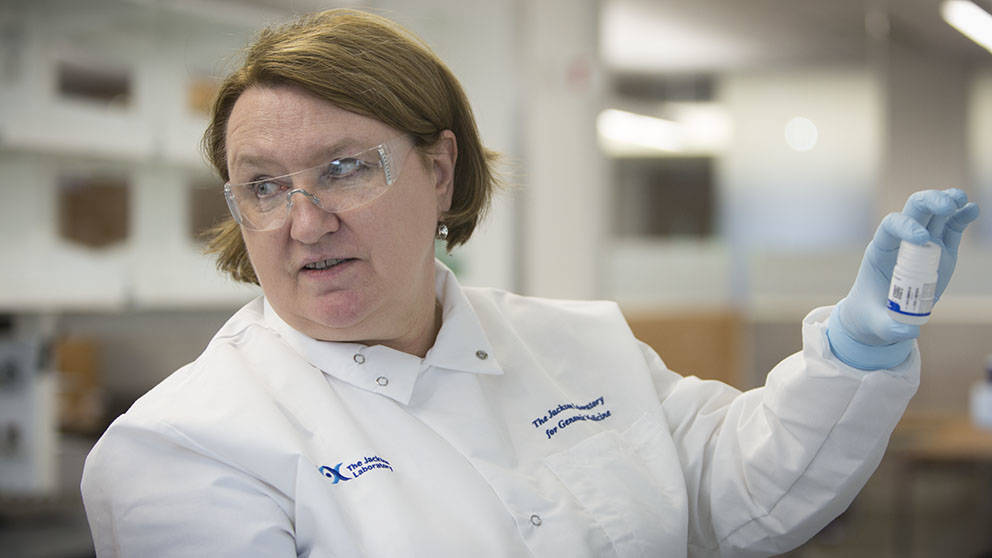 When she was a young cancer doctor in Warsaw, Poland, in the early 1990s, Karolina Palucka felt frustrated. The tools at her disposal seemed limited, blunted, too often ineffective.

One patient, a young woman in her thirties with advanced breast cancer, sparked a major transformation. "She really tipped the balance because I couldn't do much for her," says Palucka. "I loved the patients and I think they loved me, but I just could not continue doing that."

So Palucka made a bold move.

Knowing little of the world of laboratory-based research, she accepted a scholarship to pursue a graduate degree in biomedical research, landing her at the Karolinska Institute in Sweden, one of the world's premier research institutions. Although Palucka traded her white doctor's coat for a lab coat, she didn't let go of her passions. Her commitment and care for patients remain as deep as they were decades ago.

Through her graduate work, Palucka probed the inner workings of blood cells, immune cells and the cancers that arise within them. She was particularly intrigued by the immune system—an elaborate network of organs, tissues and cells that work together to defend the body against foreign threats, such as bacteria and viruses—and she began to explore how it might be mobilized to fight cancer.

It is easy to grasp the importance of such a defense when invaders, such as influenza or Salmonella, gain entry. Indeed, one of the key elements of immunity is the ability to distinguish normal tissues from foreign, "non-self" intruders. But how does this surveillance system respond to cancer? And more importantly, how can it be revved up to fight the disease?

Since the late 19th century, scientists have sought ways to boost the immune system against these invaders. A big step forward came in the 20th century, when George Snell of JAX established the genetic factors that govern the body’s ability to distinguish the difference between its own tissues and foreign invaders. Snell shared the 1980 Nobel Prize for this work conducted in the 1940s.

Palucka became fascinated by a certain type of immune cell, known as a dendritic cell—named after the Greek word dendron, for tree, because of the cells' branch-like projections. Unlike some other types of immune cells, which are relatively abundant in the body and can be readily isolated for study, dendritic cells are exceedingly rare. Despite this scarcity, they play a critical role, connecting and coordinating the two main branches of the immune system.

"It was a major breakthrough," says Palucka. "The field could now generate large numbers of these cells, which tremendously facilitated their study, but also opened doors to clinical applications."

She recalls seeing some of the data from these early studies. Compelled by them and the possibilities they inspired, Palucka began her own work on dendritic cells, isolating them from patients and growing them in the lab. Her ultimate goal: to design approaches that could be translated to the clinic.

In a 2013 interview in the journal Nature, Palucka described how she used this approach to treat the pancreatic cancer of Nobel prizewinner Ralph M. Steinman using dendritic cells—the very cells Steinman and colleagues had discovered. “Although we can’t say for sure that this treatment was responsible, Ralph survived for 4.5 years after his diagnosis—something that only around five percent of patients with this disease achieve,” she told the interviewer.

Shortly after Palucka began to work on dendritic cells, she traveled to Venice, Italy, where a major scientific meeting was convened to discuss and highlight progress in dendritic cell biology. There she met Banchereau, then at the Schering-Plough Institute for Immunology Research in France. That meeting sparked a long and fruitful collaboration. Two years later, Banchereau invited Palucka to join the institute he founded, the Baylor Institute for Immunology Research (BIIR), in Dallas, dedicated to translational medicine and with a specific focus on dendritic cells. The pair worked together there for over 15 years, publishing more than 100 scientific papers.

In 2014 Banchereau moved to The Jackson Laboratory for Genomic Medicine in Farmington, Conn., and he recruited his longtime colleague to collaborate on genomic approaches to various diseases, including cancer, that are impacted by the immune system.

For Palucka, the match again seemed ideal, and she joined JAX Genomic Medicine as professor.

"I started with humans, then I went to cells, and it was time to go to genes — to really understand and put the genome to work, particularly its regulatory components. That for me was an extremely important thing," she says. "JAX Genomic Medicine is a very forward-looking place, and I was drawn to its pioneering spirit."

New way to target advanced breast cancersNew research shows that a cytokine signature found in certain kinds of breast cancer cells can not only serve as a diagnostic tool for HER2-negative cancers but also offer an effective treatment target.new-way-to-target-advanced-breast-cancers

An additional draw for Palucka was JAX's expertise in the development and application of so-called "humanized mice." These highly specialized mice can receive an implanted human tumor—and even a human immune system—allowing scientists to study human cancers in a living system. Such capabilities are crucial for investigating immune-based therapies against cancer.

Recent years have seen a groundswell of interest in leveraging the immune system against tumors—a field known as cancer immunotherapy. The 2018 Nobel Prize in Physiology or Medicine went to James P. Allison and Tasuko Honjo, who showed how different strategies for inhibiting the brakes on the immune system can be used in the treatment of cancer.

Palucka herself is a pioneer in harnessing the immune system against cancer and other diseases. She has a grant from the U.S. Department of Defense to find ways to harness the immune system to battle triple-negative breast cancer — among the most deadly cancers of women.

Almost 90 percent of deaths due to breast cancer are attributed to metastatic disease (cancer cells spreading to distant organs), and treatments used to shrink or slow metastatic tumors provide only temporary relief: There is no cure for metastatic breast cancer.

“One promising entry point for understanding progression to metastasis—and determining how to prevent it—is to focus on the interplay between the immune system and cancer cells,” Palucka says.

She has developed a special mouse model that replicates the human immune system to better understand its effect on the tumor microenvironment, cancer cell longevity and metastatic spread to other organs.

In preliminary results, she has discovered that the presence of human cytokines (proteins that stimulate immune cells) induces cancer cells to spread to distant organs; in fact, metastasis did not occur in the mice lacking human cytokines. “This distinction will allow us to precisely define immune cells or signals that drive cancer cells to spread—signals that could represent promising therapeutic targets for intervention,” Palucka says.

And, she notes, the utility of this model extends beyond TNBC to other metastatic cancers as well. “The potential benefit of this work could be the identification of new treatment targets for limiting metastasis in at-risk patients, possibly improving the ability to cure patients with this devastating disease.”

I think the next decade is really going to see some [therapies] getting into the clinic for everyday use. It is really a terrific time.

Palucka’s work in melanoma, in collaboration with Richard Flavell, Ph.D., of Yale University,

She recently received a five-year, $11 million grant from the National Institute of Allergy and Infectious Diseases for a new Cooperative Center on Human Immunology, “Modulation of lung immune responses to viral infection.” Palucka and her collaborators will explore the hypothesis that the quality and magnitude of immune response to respiratory viral infections are determined by the interactions between the lung microbiome and host lung and immune cells.

Palucka's optimism and enthusiasm for what lies ahead are obvious. Her group spans both the Bar Harbor and Farmington campuses of JAX. Eleven members of her former Dallas lab relocated to JAX along with her. "It's a soccer team," she jokes. Each lab member is a trained expert in human immunology.

Although she has already witnessed some amazing leaps, she sees more groundbreaking work yet to come.

"What a tremendous jump the field has made," says Palucka. "I think the next decade is really going to see some [therapies] getting into the clinic for everyday use. It is really a terrific time."

Associate Research Scientist Radu Marches, Ph.D., is one of many scientists studying immunology in the lab of Jacques Banchereau.