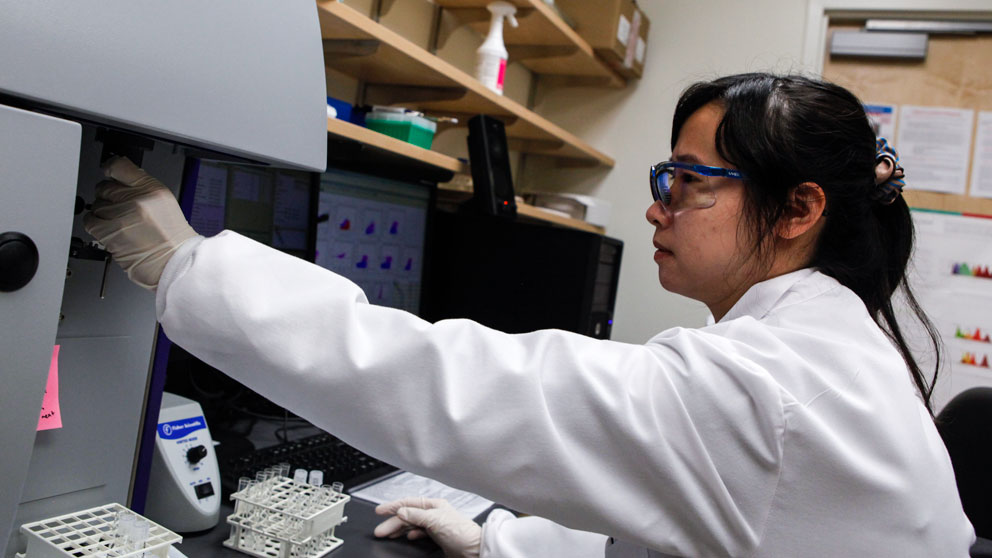 Tina Wu, Ph.D., a researcher in the Palucka Lab at The Jackson Laboratory for Genomic Medicine, is part of the scientific team that is working to find better treatments for patients who have advanced breast cancers.

A cytokine signature found in certain kinds of breast cancer cells can not only serve as a diagnostic tool for HER2-negative cancers but also offer an effective treatment target.

A research team led by Karolina Palucka, M.D., Ph.D.Conducts research to understand how vaccines work and to define precisely the immune mechanisms that underlie vaccination, with a focus on cancer immunotherapies.Karolina Palucka, M.D., Ph.D. , a professor at The Jackson Laboratory (JAX), has collaborated with researchers at The Baylor Institute for Immunology Research to show that IL1b, a member of the interleukin 1 family of cytokines (proteins released by certain cells of the immune system) drives the inflammation often found in cancer, and appears as an “IL1 signature” in women with HER2-negative metastatic breast cancer.

“We found that IL1b orchestrates tumor-promoting inflammation in breast cancer,” Palucka says, “and its presence corresponds with poor clinical outcomes. We show that it can be effectively targeted in patients using anakinra, a naturally occurring IL1 receptor antagonist.”

Anakinra is already widely used to treat autoimmune and autoinflammatory diseases, and is being tested as an adjunct therapy to reduce the inflammation of metastatic cancer, including metastatic colorectal cancer. In the new study, 11 women with advanced metastatic HER2-negative breast cancer received anakinra treatment, and after just two weeks showed reduced gene expression of IL1b and other cytokines and signaling pathways.

The patients then received anakinra in combination with standard chemotherapeutics for HER2-negative cancers for a median duration of four months. Some patients reported less pain and increased quality of life during this combination treatment, and three of them are still alive.

The team’s report appears as the cover article in the journal Cancer Research, along with a commentary by Charles A. Dinarello, Ph.D., of the University of Colorado Denver Anschutz Medical Campus, who discovered, cloned and characterized the essential biology of a human “fever molecule,” which was later named Interleukin-1 (IL-1).

“The study represents several years of dedicated research on cancer by Palucka and colleagues,” Dinarello writes. “Although there are several advantages of knowing a transcriptional signature, including risk and prognosis, a real benefit is the exploitation of the signature to develop specific, targeted therapies. In the case of patients with cancer with IL-1 signature genes, one could simply block IL1. In fact, this is exactly what the study accomplished.”