A new definition of Alzheimer's disease 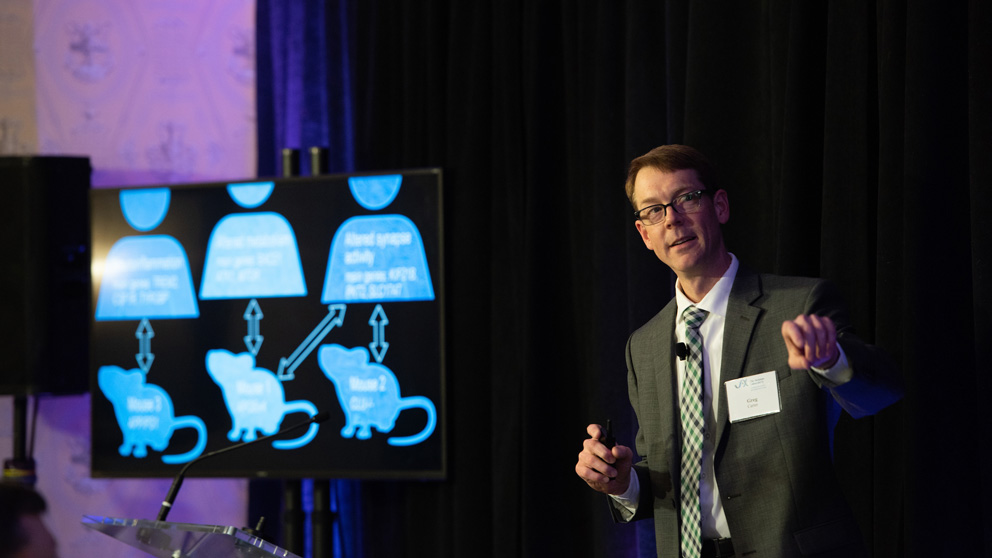 Jackson Laboratory (JAX) scientists are redefining  Stopping Alzheimer's disease before it erases memories, personalities and lives?Yes, it's possible. Using genomic technologies and specialized mouse models to develop preventative therapies, JAX scientists aim to stop Alzheimer’s before it starts. Alzheimer’s in order to search for cures for the devastating disease.

In a TED-style talk at the Cumberland Club in Portland, Maine, Gregory Carter, Ph.D.Develops computational strategies using genetic data to understand complex genetic systems involving multiple genes and environmental factors.JAX Associate Professor Gregory Carter, Ph.D., shared how he and his colleagues are using new technology to define the disease in a more quantitative and precise way. The event is the second in JAX’s new speaker series, JAXtaposition: Cures Can’t Wait, which features TED-style talks on cutting-edge programs and research from JAX scientists and leadership.

The prominent symptoms of Alzheimer’s — memory loss, problems with visual or special perception, disrupted speech patterns — Carter explained, are manifestations of atrophy of the brain. And rerouting a degenerative brain is a much bigger challenge than finding a treatment to stop the degeneration of the brain. “That’s what we’re after,” said Carter, “a way that we might be able to diagnose that doesn’t depend upon the damage already being present.”

How can we develop therapies for Alzheimer’s disease? Alzheimer’s disease is still poorly understood despite its huge costs and burden. Greg Carter is working at the intersection between patient and mouse research to develop accurate disease models and develop effective therapies.Carter’s approach is to redefine Alzheimer’s disease as a “molecular readout” rather than a behavioral manifestation of brain degeneration.

This means looking at not only the traditional hallmarks of Alzheimer’s (buildups of proteins called amyloid plaques or tau protein tangles in the brain, which typically are only seen in post-mortem brain scans), but using three new molecular modalities to help understand the processes involved in Alzheimer’s development and diagnose Alzheimer’s early:

Using these tools could help us define the disease in a more quantitative and precise way, and hopefully earlier than the actual decline of neurons in the brain, Carter explained.

For the past 15 years, the most commonly used mouse model to study Alzheimer’s in pre-clinical studies and drug screenings was one modeled from a rare gene that causes amyloid poisoning in the human population. Only a few hundred people in the world have this mutation. And yet, this narrowly-defined model has been the basis for most biomedical research related to Alzheimer’s. As JAX’s Vice President for Advancement Gregory Leet said at the event’s conclusion, “It’s as though we’ve been betting on the wrong horse all these years.”

“Most people don’t get Alzheimer’s because they have that very rare mutation,” said Carter. “They’re not one of the few hundred people in the world, they’re one of the 50 million who are getting Alzheimer’s disease for other reasons.”

Although rarely linked to a single gene, it is estimated that approximately 50-70% of the risk of getting Alzheimer’s disease is genetic. Carter is looking at the broader genetics across the human population (using the three new molecular modalities described above) and modeling these genetic traits in mice in order to paint a more accurate picture of how many genetic factors combine to drive the disease in the broader human population.

JAX is uniquely positioned to do this type of work for three reasons, Carter said: “The Laboratory’s expertise in complex genetics, its computational analysis capabilities, and its mouse model technology.”

The JAX team is using tools like CRISPR, an advanced gene-editing technology, to give mice the same genetic changes as humans, down to the individual genetic unit. They can have the same biological pathways disrupted as patients, down to the molecular level. They can carry any combination of these disruptions to see if two or more are needed for disease to manifest. And they can mimic behavior patterns such as diet and exercise and can be monitored around the clock for changes in motion and response.

This unprecedented ability to mimic Alzheimer’s is bringing us closer than ever to finding treatments for the disease.

“This finally gets us to a place where we can take a model mouse, think about how the human population may stratify by the genetic factors that we put in that mouse, see if the pathology matches the mouse, and, if it does, use that mouse to screen for treatments or cures,” said Carter.