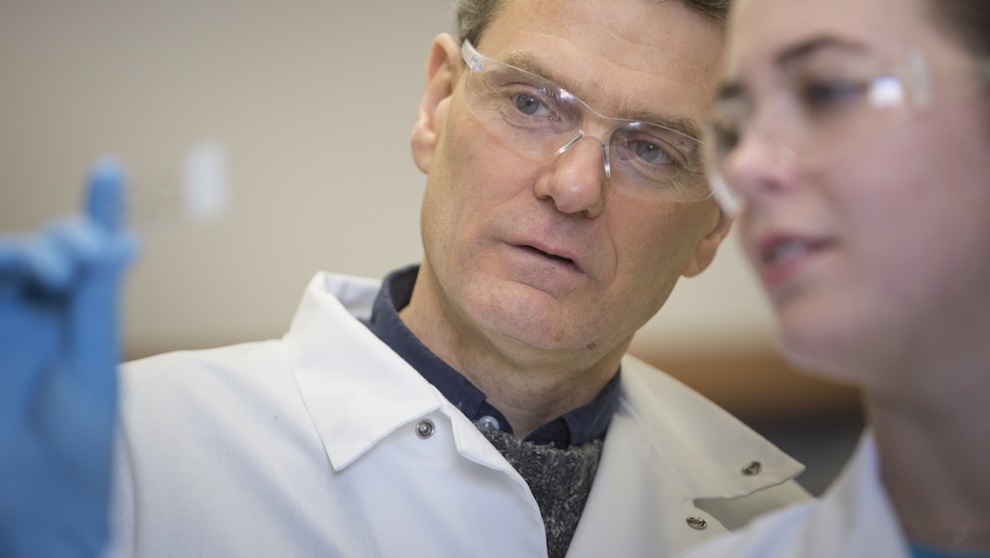 Simon John sees things differently. The Jackson Laboratory professor and Howard Hughes Medical Investigator brings an inventor’s creativity, a scientist’s precision, an engineer’s practicality, a revolutionary’s iconoclasm and a general’s leadership to the study of glaucoma.

The best-known symptom of glaucoma is increased intraocular eye pressure (IOP) leading to damage of the optic nerve. Treatments such as eye drops that reduce IOP have made glaucoma a chronic but manageable disease, but improved treatments are fervently needed, especially ones that more directly treat the optic nerve. Such new treatments will improve the care of patients with high IOP and will preserve vision in the many patients who do not respond well to IOP lowering or who develop glaucoma while having a normal eye pressure.

At a time when the research world was skeptical of the use of mice to study glaucoma, it was John who pioneered methods and tools enabling decades of breakthroughs. He developed the first mouse models that present all the features of glaucoma. And he was the first to measure IOP in a mouse — take a moment to think about what tiny amounts of fluid are involved.

John has also exploded the conventional view of the mouse eye. His lab discovered critical genes and pathways involved in the normal development of eye structures, and others that contribute to both adult-onset and congenital forms of glaucoma. Their foundational work established the novel nature of Schlemm’s canal, a key gatekeeper for the proper flow of eye fluid, leading to the creation of a suite of new tools for studying ocular drainage tissues and IOP.

In fact, it’s the combination of advancing both technology and research that sets the John lab apart.

A single, targeted X-ray treatment of an individual eye in young, glaucoma-prone mice provided that eye with apparently lifelong and complete protection from glaucoma, John and his lab demonstrated. Additionally, they discovered that a cell type known as monocytes enters the optic nerve from the blood very early during glaucoma and may be necessary to mediate glaucomatous nerve damage. The radiation treatment prevents these monocytes from entering the nerve. Further research in other animal models to assess protection as well as safety and efficacy is necessary before attempting human treatments, but this work raises the possibility of using highly controlled localized radiation — or perhaps another therapy that blocks monocytes — to prevent human glaucoma.

John also worked with bioengineers at Purdue University to develop miniaturized, implantable, wireless sensors to detect changes in IOP. If this technology can work at the scale of a mouse eye, imagine the possibilities for applications in human health.

In 2005 John’s team and clinical collaborators published a genetic link to porencephaly, a devastating neurological condition previously believed to stem from abnormally excessive blood clotting. Instead of excessive clotting they implicated changes in a gene that compromises blood vessels leading to increased hemorrhage especially due to the trauma of birth. This work suggested that the conventional anticlotting treatments were potentially dangerous, while prenatal testing of infants for mutations in the COL4A1 gene, and Cesarean delivery of these at-risk babies, may increase their survival and even eliminate some disease features. They also implicated this gene in hemorrhagic stroke and in sudden death due to excessive bleeding following mild trauma or even exercise. Individuals identified through genetic testing as being at risk could avoid these conditions through behavioral modifications such as avoiding contact sports or high-intensity exercise.

More recently, John and his team demonstrated a new analysis technique that detects early stages of glaucoma, and actually mitigated the disease by targeting some of the molecular events in those early stages. In other research they showed that a form of RNA granules known as stress granules — key players in basic cell processes — can affect eye development, leading to juvenile cataracts and glaucoma in humans and mice. And they discovered a gene implicated in an acute and severe form of glaucoma known as angle-closure glaucoma.

A hallmark of John’s research is a kind of audacious elegance. Having uncovered a role for L-DOPA in congenital glaucoma, John showed that feeding the molecule to mice with a mutation in a human developmental glaucoma gene during gestation prevents the developmental abnormalities. This suggests that ingestion of foods rich in L-DOPA (such as fava beans) may be therapeutically useful, and may explain why some individuals with congenital glaucoma mutations are protected from disease in populations with a diet rich in L-DOPA.

Likewise, the John lab recently showed that in mice genetically predisposed to glaucoma, Vitamin B3 added to drinking water prevents the disease when administered before symptoms occur, and reduces damage and vision loss in mice that have already developed symptoms. Importantly, this treatment complements IOP lowering strategies as it directly protects the optic nerve and retina. These surprising findings offer promise for developing inexpensive and safe treatments for glaucoma patients via diet or gene therapy, and clinical trials are now under development.

Over the years John has helped to ensure the success of his lab by carefully selecting, and proactively mentoring,  talented research scientists — Ph.D.s who have already completed their postdoc stints — to run the day-to-day operations of the lab’s many ongoing research projects. This experience gives the young scientists a significant leg up in securing their first independent research grants.

Described as a “world authority in glaucoma” by his own mentor, the late Nobel laureate Oliver Smithies, John is the recipient of many prestigious awards, including the Lewis Rudin Glaucoma Prize, the Bressler Vision Science Award and the Global Glaucoma Award from the Association of International Glaucoma Societies.