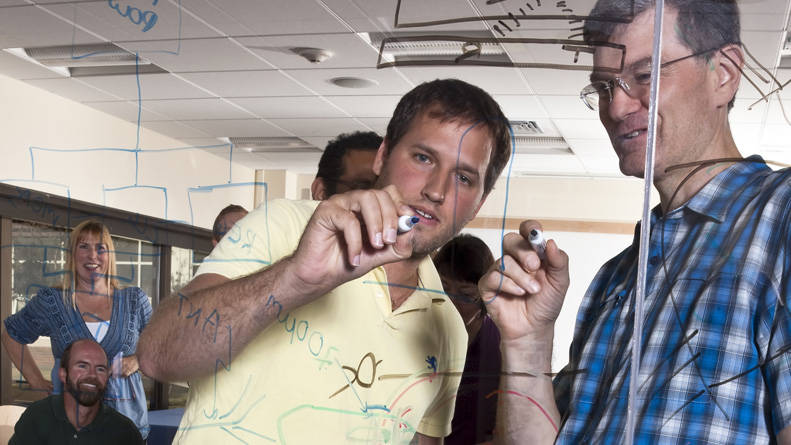 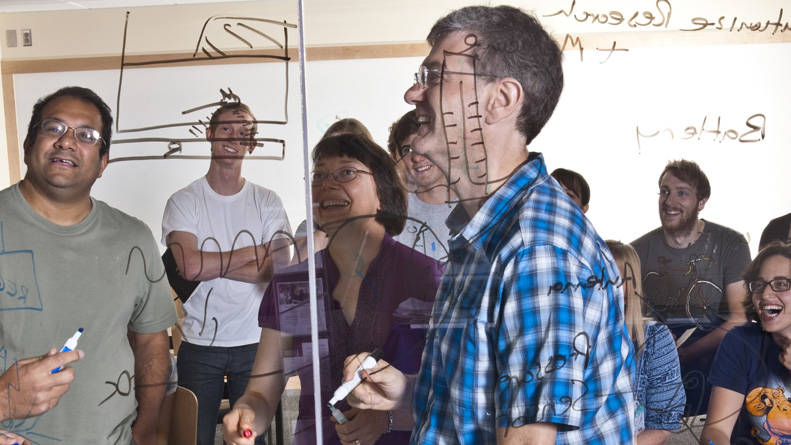 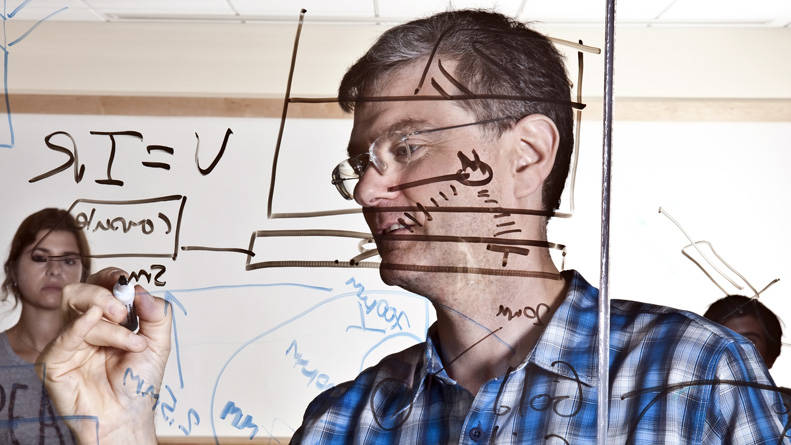 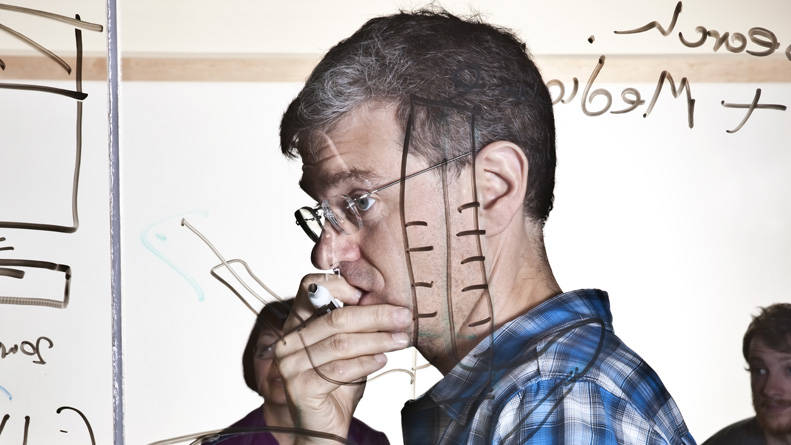 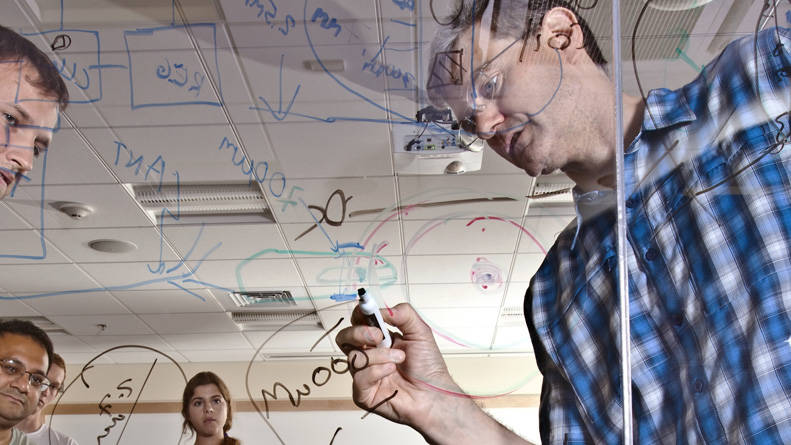 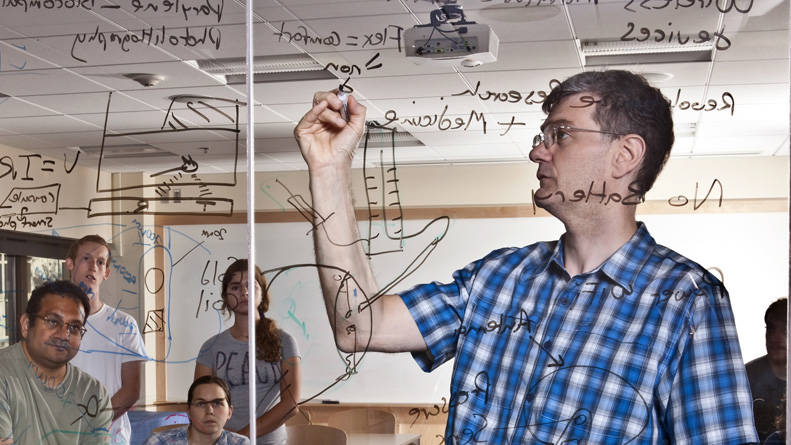 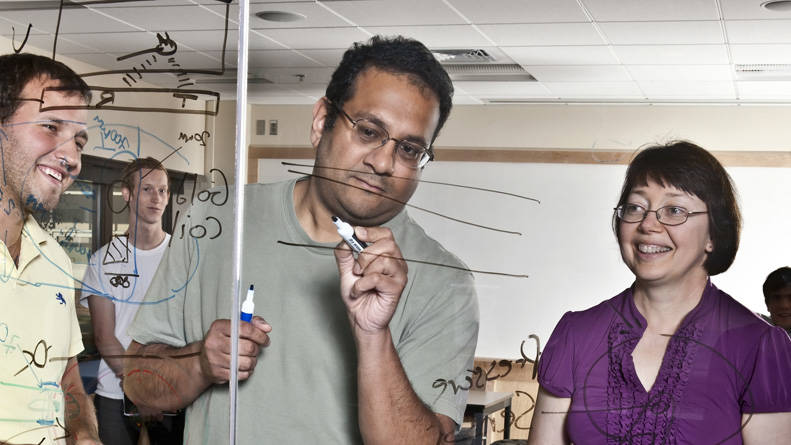 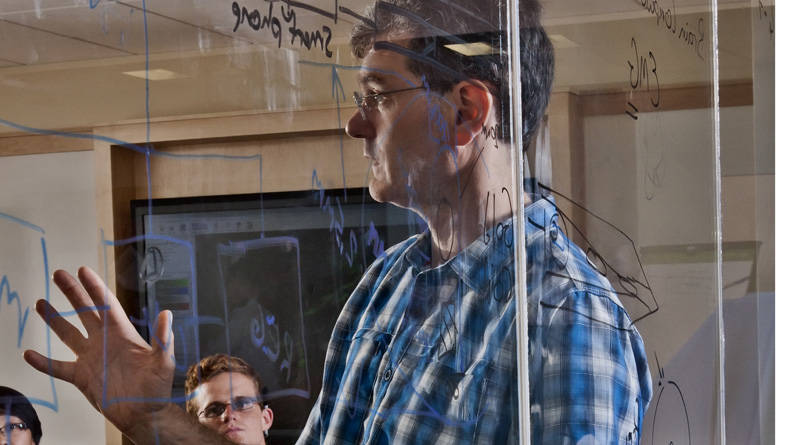 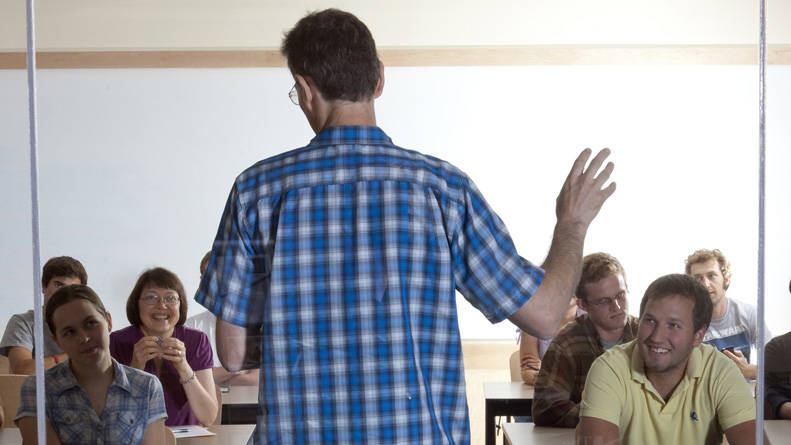 Mimi de Vries, Ph.D., stands back from the whiteboard on which she has just drawn an elaborate organizational chart, full of boxes, lines and arrows, of the Simon W. M. John laboratory. The John lab's perennially sunny manager smiles pensively. "And it all has to run like clockwork."

The unique organization of the John lab—with several research scientists operating independent but interconnected projects with their own teams of technicians and postdocs, in collaboration with a team of engineers from Purdue University— could be the secret behind the group's extraordinary success. It's a kind of Manhattan Project to develop weapons against the complex group of diseases known collectively as glaucoma.

Glaucoma, a leading cause of blindness, affects more than 4 million Americans, at least half of whom don't even know they have the disease. Current treatments target intraocular pressure (IOP) elevation, the best-known risk factor for glaucoma. However, blindness-inducing damage to retinal ganglion cells and the optic nerve can occur in patients with normal IOP.

I'm driven to make a contribution, to help patients and society. And that keeps getting stronger.

As the leader of this "Glaucoma Project," John himself combines the visionary intensity of the Manhattan Project's lead scientist, J. Robert Oppenheimer, with down-to-earth logistical precision. "Current treatments aren't adequate," he says in his clipped Welsh accent. "They're all aimed at lowering the IOP, and they're not effective in all patients. If we can identify the genes that are associated with the risk of developing glaucoma, this would suggest new pathways and targets for treatment."

A Jackson Laboratory professor and Howard Hughes Medical Institute (HHMI) investigator, John is also one of only eight researchers in the nation to receive a Collaborative Innovation Award from HHMI. These awards are intended to fund interdisciplinary, collaborative and "potentially transformative" research.

John and his fellow researchers are mounting his war on glaucoma on multiple fronts, deploying specialized teams to find new ways of detecting the disease earlier—before symptoms develop—and to invent better treatment strategies for preventing blindness due to glaucoma. The strategy is paying off with recent breakthroughs reported in several aspects of glaucoma.

Using a mouse model that reliably develops the disease as most humans do, in late middle age (around 12-18 months for a mouse), the researchers demonstrated a new analysis technique that detects early stages of glaucoma, and actually mitigated the disease by targeting some of the molecular events in those early stages. In other research they showed that a form of RNA granules known as stress granules—key players in basic cell processes—can affect eye development, leading to juvenile cataracts and glaucoma in humans and mice. And they discovered a gene implicated in an acute and severe form of glaucoma known as angle-closure glaucoma.

In 2012 the John lab demonstrated that a single, targeted X-ray treatment of an individual eye in young, glaucoma-prone mice provided that eye with apparently lifelong and complete protection from glaucoma. This work also implicated monocytes, a type of immune cell not seriously considered in previous glaucoma research, as important initiators of damage.

The radiation treatments prevent monocytes from entering the eye, which may explain the mechanism of protection. Further research in other animal models to assess protection as well as safety and efficacy is necessary before attempting human treatments, but this work raises the possibility of using highly controlled localized radiation—or perhaps another therapy that blocks monocytes—to prevent human glaucoma.

The John lab has multiple projects going on at the same time, some "front of the eye" (studying the genetics and biology of IOP) and some "back of the eye" (investigating the neurodegeneration in glaucoma). Each needs high-level expertise for day-to-day management, so the usual model of one principal investigator managing several postdocs won't work. John determined that in addition to training postdocs he needed to hire from a category called research scientists—Ph.D.s who had already completed their postdoc stints and were thus ready to run research projects with more autonomy.

In so doing, John is providing valuable support for the careers of several young research scientists: Gareth Howell, Ph.D. (who in 2012 became an assistant professor at JAX), Sai Nair, Ph.D., and Krish Kizhatil, Ph.D. It's a tough world out there for Ph.D. researchers. Setting up a new lab at any U.S. research institution and becoming a principal investigator means securing National Institutes of Health funding for basic research. With the average age for a biomedical researcher's first so-called R01 grant now 42, that's a long road to travel.

Howell, whose work focuses on neurodegeneration and genomic sequencing, met John about 10 years ago, when he was a postdoc in another laboratory. He says John gave him the mentorship, training and background he needs to succeed as a principal investigator, as well as a boost thanks to John's own prestige in the field.

"Simon is so well respected a mouse geneticist and glaucoma researcher that people are always keen to work with him," Howell says, noting that this leads to many invitations from other institutions to give seminars or collaborate.

The unusual structure of the John lab also gave Howell hands-on management experience. "In the last five years we've brought in fresh B.A. or B.S. graduates: talented, energetic young people who are motivated to go on to medical, graduate or veterinary school but who first want to take a couple of years to work in a lab to gain more research experience. The first few of those students have now moved on to some of the best programs in the country."

We've brought in fresh B.A. or B.S. graduates: talented, energetic young people who are motivated to go on to medical, graduate or veterinary school but who first want to take a couple of years to work in a lab to gain more research experience.

Howell oversaw the daily activities of two of these "pre-grad" research assistants, Catherine Braine and Katharine MacNicoll. "That gave me great experience in running a lab and organizing projects, and that gives me a huge advantage now that I'm ready to set up my own lab."

John's most important training, Howell says, "though it may sound corny, is in how to do good science—how to think critically, to look at the experiments and the data and go that extra mile to make sure you've done enough. The diseases we work on are complex so you can't use just a few samples to get the answer. Most of all, [he shows] how to be a leader in the field by thinking about what's needed and how to get that done."

When John was himself a postdoc, he too had a remarkable mentor: 2007 Nobel Laureate Oliver Smithies, D.Phil., Weatherspoon Eminent Distinguished Professor at the University of North Carolina School of Medicine.

"What a joy to have Simon as a postdoctoral fellow," Smithies says. "He was as unstoppable as a tank, and always full of adventure. Not content with studying the genetics of blood pressure in mice, he decided—completely as a result of his own imagination and drive—to study the genetics of intraocular pressure. And now he is a world authority on glaucoma. I regard it as one of my greatest achievements to have had him in training."

Mischievously, the British-born Smithies adds, "[He is] as unstoppable as a tank, and almost as impenetrable in his accent."

John, who earned his Ph.D. in biology from McGill University in Montreal, came to The Jackson Laboratory in 1995, fresh from being a postdoc in Smithies' lab, with a plan to continue his research in glaucoma. Recognizing the need for a way to measure the IOP of a mouse eye, he invented the first procedure for precise IOP measurements and has continued to refine it.

Since then the John lab has innovated many other research tools, including a database system that most Jackson Laboratory scientists, and many others, depend on. The HHMI Collaborative Innovation Award was used to develop yet another tool: miniaturized sensors to detect changes in IOP.

Pedro P. Irazoqui, Ph.D., a Purdue University associate professor of biomedical engineering and electrical and computer engineering, is starting a sabbatical term on the Laboratory's campus. Irazoqui and Purdue electrical engineer Bill Chappell, Ph.D., are John's collaborators on the project.

Irazoqui says his first encounter with John was by telephone. "I was on a beach in Spain, vacationing with my wife and son, and my phone rang. It was Simon John, this crazy Welshman, and at first I couldn't understand him for the life of me!" John had read a Purdue press release about Irazoqui's development of an implantable device to go in the human eye, and wanted to know if a mouse-sized version was possible. "I said sure, but it will take a lot of time and money."

Irazoqui describes his ensuing collaboration with John as "extraordinarily productive." The project has led to the invention of a new class of small, implantable tools powered by WiFi. The miniature wireless devices have the potential to transform research capabilities and medical practices.

"The difference between Simon and all the other biologists and doctors I work with is that most of them just want me to build them a widget, but they don't really want to know how it works," Irazoqui says. "Simon actually wants to understand the engineering, but even more importantly, he actually contributes to it.

"He's a good rock climber, too," Irazoqui adds with a smile. "I think that's a prerequisite to working with Simon." Across from the office he occupies, a window is plastered with photos of John lab members scaling impossibly steep-looking rock faces in nearby Acadia National Park.

In fact, John deeply values the time he spends with members of his lab rock-climbing, kayaking, hiking and socializing. "I see them as a team—even as an extended family," he says. "When I invite someone to join our lab, I want it to be the start of a lifelong relationship."

John says the vision and mission of his lab, the reason for hiring the best young researchers and advancing their careers, for developing new research tools and reaching out to collaborators, is simple.

"I'm driven to make a contribution, to help patients and society. And that keeps getting stronger."