The immune system is comprised of many different types of cells that work together to orchestrate an effective defense against pathogens. One class of immune cells, innate lymphoid cells (ILCs), were only recently described, but they have been shown to be vital for the initiation of protective immune responses. The mechanisms underlying their development and differentiation from common lymphoid progenitor cells (CLPs) in the bone marrow remain unknown, however. 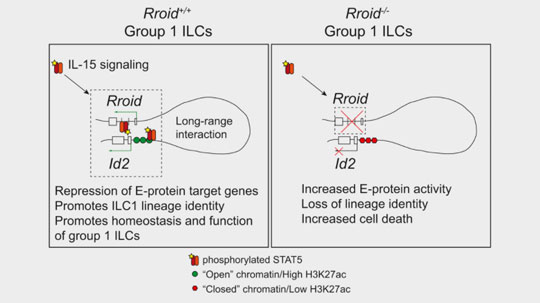 CLPs differentiate into three groups of ILCs (ILC1, ILC2 and ILC3) as well as adaptive lymphocytes, better known as B and T cells. It was previously shown that the lineage fate of CLPs — differentiating into innate (ILC) or adaptive (T or B) lymphocytes — was determined by the Inhibitor of DNA Binding 2 gene (Id2), which, when expressed, inhibits T and B cell development and in favor of ILCs. But differences between the three ILC subsets remained unclear.

In “Group 1 Innate Lymphoid Cell Lineage Identity Is Determined by a cis-Regulatory Element Marked by a Long Non-coding RNA,” a paper published in Immunity, a team led by Jorge Henao-Mejia, M.D., Ph.D., of the University of Pennsylvania and JAX Assistant Professor  further investigated the Id2-associated regulatory system. What they found was a long non-coding RNA (lncRNA) they called Rroid (for RNA-demarcated Regulatory region of Id2) that marks a genetic locus crucial for lineage identity, maturation and function in ILC1s, but not ILC2s or ILC3s.

Through a complex series of steps, the Rroid locus specifically regulates chromatin accessibility and transcription factor binding at the Id2 promoter. Without the Rroid locus, progenitor cells were able to commit to ILC1 lineage, but later development and maturation of ILC1 group cells was blocked. This indicates that maintenance of lineage identity in ILC populations is controlled by specific epigenetic regulatory elements at the Id2 locus, with Rroid playing a vital role in ILC1 function.