Pet owners who choose to participate in the tumor donor program voluntarily donate their dogs’ tumors through their veterinarians, whose animal hospitals are participating in the research program. The work is done on tumor samples from dogs that have naturally developed gliomas/glioblastomas and whose owners want to help find cures.

Boston terriers, Pugs, French Bulldogs, Shih-Tzus, Pekingese: You know them as YouTube stars, celebrity arm-candy and Instagram sensations, but they’re also making important contributions to research in one of the most deadly kinds of cancer.

That’s because these and other short-snouted breeds — the technical term is brachycephalic — have an elevated risk for developing  Glioblastoma ‘ecosystem’ redefined for more effective immunotherapy trialsA JAX-led research team detects gene expression patterns distinct from those of the surrounding immune cells, and characterizes the effects of chemotherapy and radiation treatments.glioblastomas and gliomas, brain tumors that have a particularly high mortality rate in humans and dogs.

Ultimately our project will benefit dogs and humans alike, and I’m extremely excited about this.

Profiling brain cancers for more targeted treatmentsProfessor Roel Verhaak, Ph.D., is focused on the analysis of cancer genomics data to improve our understanding of cancer biology. Roel Verhaak, Ph.D., is one of the world’s leading experts in these brain cancers, whose work has literally defined the categories of glioblastomas for the research and medical communities. Before joining The Jackson Laboratory last year as a professor, when Verhaak was on the research faculty of the M.D. Anderson Cancer Center in Houston, Texas, he was approached by a neurosurgeon colleague, Amy Heimberger, M.D.

“Amy asked me if I wanted to be involved with this canine cancer project,” Verhaak relates. “My first reaction was, like many people I love dogs and they’re important to me, but I study human cancers — why would I work on canine disease?”

But Verhaak says he “saw the light” when Heimberger explained the value of dogs in studying cancer immunotherapies. Not only do dogs get the same kinds of brain cancer as humans, but their immune systems also react very similarly to treatments aimed at harnessing the immune system to combat tumors.

“To study immunotherapy preclinically is very difficult,” Verhaak says. “Cell cultures don’t have immune cells. Mice have some level of immunity but may not represent the full human immune response.”

Dogs, on the other hand, have a fully developed immune system. This is an adaptation to the typical doggy lifestyle, which involves digging in the garden, exploring the kitchen trashcan or eating who-knows-what on morning walks. “Anybody who owns a dog knows that there are a lot of immunological challenges in the life of a dog,” Verhaak says.

And, unfortunately, some dogs develop canine gliomas or glioblastomas.

Verhaak and Heimberger obtained a grant from the National Cancer Institute to fund preclinical immunotherapy trials in dogs. Working with Texas A&M University in College Station, which has a collaborative network of veterinary clinics, the researchers collected 180 postmortem samples from dogs with brain tumors: cancer and normal samples from 70 dogs and cancer-only samples from another 40 dogs.

The canine cohort, the largest ever assembled, includes samples from brachycephalic breeds, many of which carry genetic markers related to predisposition to canine brain cancers, but also some Doberman Pinschers, Labrador Retrievers and other breeds. 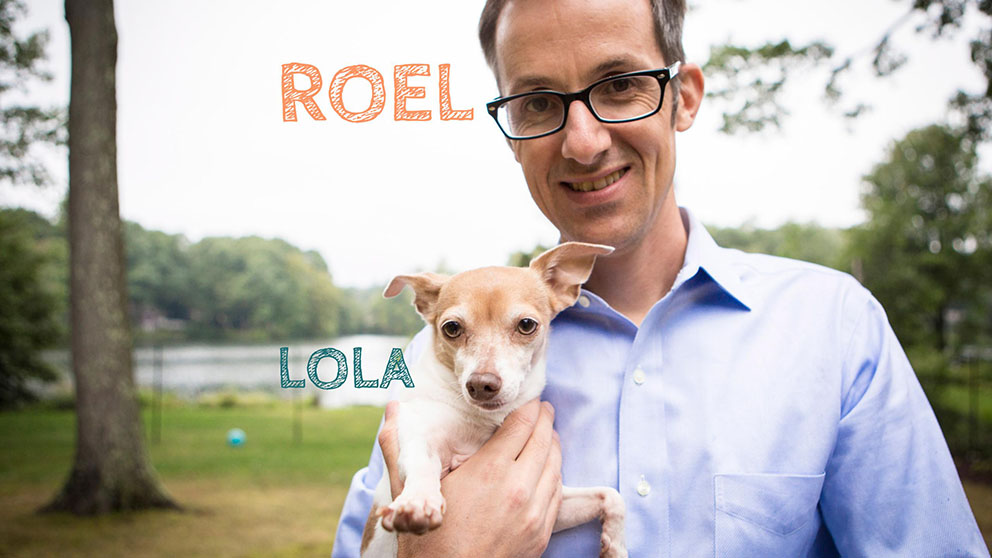 Roel Verhaak, Ph.D.Brain tumors, sequencing, computational biology.Verhaak’s lab has been conducting whole-genome and RNA sequencing of the samples, and is just now “scratching the surface” of analyzing the data, he says. It’s a heavy-lifting project that takes a lot of hands-on time in the lab.

“We’ve already confirmed that there are similarities, from a molecular perspective, between markers for human gliomas and those for dogs,” Verhaak says. “I think once we have our full cohort completed we'll be able to see markers that may be more canine-specific. That in itself will be interesting: What do you see in canines and not in humans, and vice versa?”

Those differences will be important, he explains, in understanding the outcomes of preclinical immunotherapy trials in dogs. “Unless we know molecularly if they're similar to humans, we don't really know how to interpret the results. If immunotherapy works in dogs, we need to be able to pinpoint why it works in those dogs, so that we can improve the efficacy of immunotherapies for human cancer patients.”

Verhaak is also interested in why dogs develop tumors at all. For human glioma patients, most are diagnosed around 60 years of age, their bodies’ having accumulated 60 years’ worth of genetic damage. The dogs in the study averaged about 10 years old when they developed the canine form of the disease — that’s about the same in “dog years” but their cells’ genetic damage is somehow accelerated.

Besides differences between adult human and canine gliomas, Verhaak will also be comparing canine glioma to pediatric glioma. “Our goal is to do a three-way comparison, because pediatric and adult glioma are not the same diseases either.”

Verhaak’s first encounter with canine cancer occurred in his childhood, when the family dog developed a tumor late in life. A healthy and charismatic Chihuahua called Lola is now part of his family.

“To understand canine cancer will help us to better understand human cancer, and particularly from the angle of immunotherapy,” Verhaak says. “I think we're going to learn an incredible amount by comparing the species in this way. Ultimately our project will benefit dogs and humans alike, and I’m extremely excited about this.”