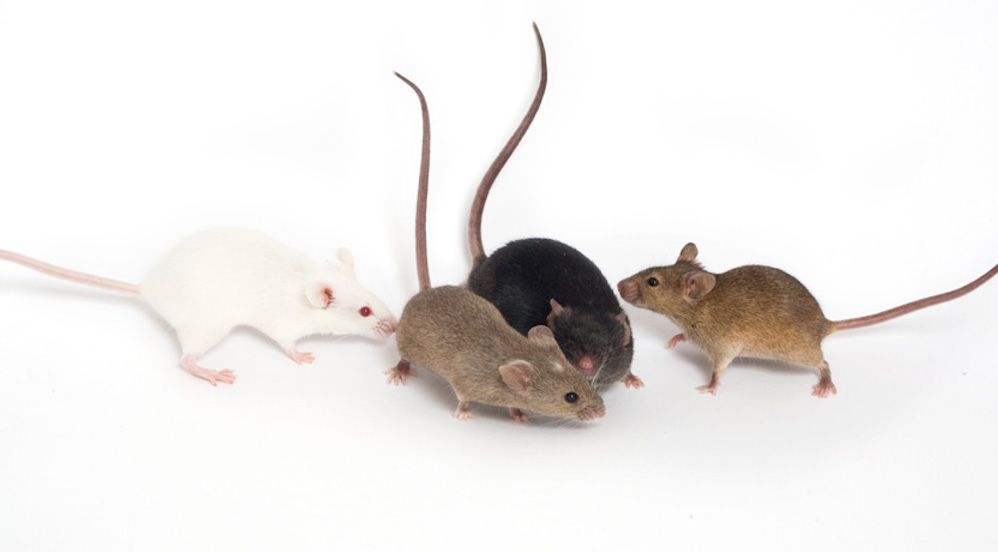 Surprising features of the mammalian genome — such as genetic regions associated with metabolic disease and clues to male infertility — are among the findings reported in the June issue of the journal Genetics by Jackson Laboratory (JAX) scientists and collaborators working with Collaborative Cross (CC) and Diversity Outbred (DO) mouse populations, the product of crossing multiple mouse strains to increase genetic diversity.

In fact, CC and DO mice, first developed by JAX scientists and their international collaborators, have inspired a plethora of genetically diverse, “multi-parent” model organisms to explore complex human disease, including yeast, fruit flies and plants (strawberry, rice, maize, sorghum, wheat and more). More than a dozen papers based on these organisms, including seven using CC or DO mice, are featured in Genetics and its sister journal, G3: Genes|Genomes|Genetics.

Why go multi-parent? In inbred laboratory mice, it’s possible to connect specific genes with a particular phenotype (physical characteristic or trait) such as height, eye color, longevity or resistance to cancer. But given the mixed-up ancestry of the human population, there’s precious little association between genetic elements and phenotypic variation in people.

And since the goal of genetics is to connect genes and phenotypes in an outbred population (a.k.a. humanity), multi-parent model organism populations fit the bill. This breeding scheme starts with eight or more individuals, each with well-defined genetic backgrounds, and ultimately produces offspring that are each genetically unique yet knowable.

“Multi-parent model populations are actually much more powerful than human genetic studies for understanding complex traits,” says Jackson Laboratory Professor Gary Churchill, a pioneer of the CC and DO mouse populations. “We know ‘who’ the eight founders are, we have their whole genome sequences and we can reconstruct all the individual animals from those populations.

Churchill is coauthor of three of the papers in Genetics, including a new reference to the genomes of CC mice for the research community. A second paper, using DO mice, redraws the landscape of the vital process known as meiotic recombination.

“When chromosomes get passed from parents to offspring,” Churchill explains, “they recombine, and that mixes up their genetic content. Our study of recombination is several magnitudes bigger than anything ever conducted before. We have thousands of mice and 2.2 million recombination events. This helps us understand how chromosomes break up in the big picture, but also provides unprecedented details.”

The research, led by Churchill’s longtime collaborator Fernando Pardo-Manuel de Villena of the University of North Carolina, Chapel Hill, revealed that recombination avoids the many locations in the genome with repeating segments. “It's still a mystery why, and we need more experiments to figure that out,” Churchill says. “But this could help us understand how mammalian genomes evolve, and how DNA recombines.”

The process of developing the CC involved crossing eight founder strains, theoretically generating more than 1,000 new strains (known as recombinant inbred strains). Yet only about five percent (200 strains) actually resulted due to infertility issues. JAX Associate Professor Elissa Chesler is coauthor of a study led by Pardo-Manuel de Villena demonstrating that more than half of this extinction in the CC mice is due to infertility in male mice. The research revealed genetic regions associated with poor fertility and could be a useful resource for further study of mammalian infertility.

JAX Associate Professor Greg Carter used computational techniques to explore genes associated with metabolic disease in a small population of DO mice. His research team uncovered a surprisingly large number of unusual genetic interactions, and identified a number of genetic regions that made individuals more or less susceptible to the effects of a high-fat diet. The approach shows a new way to exploit the genetic diversity of multi-parent populations in the search for complex traits associated with disease.