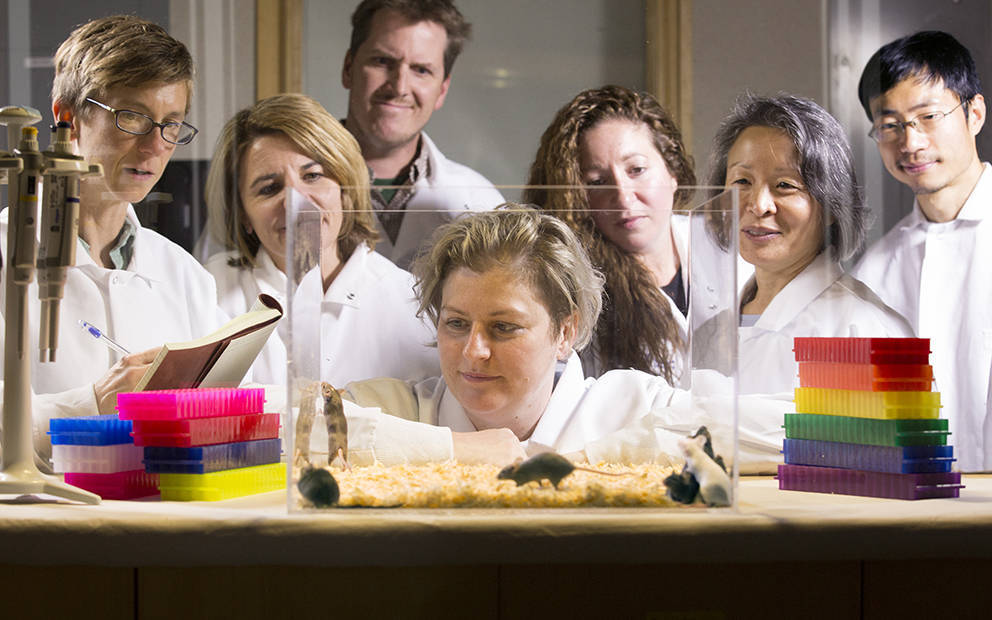 Flanked by collaborators, Parkinson's disease researcher Sarah Stephenson (center) observes mice at The Jackson Laboratory. She came to JAX to learn how to best utilize the Collaborative Cross in her work. Photo by Tiffany Laufer.

Australian researcher Sarah Stephenson, based at Murdoch Childrens Research Institute in Melbourne, is on the last day of a six-week visit to The Jackson Laboratory’s headquarters in Bar Harbor, Maine. Her goal for this trip halfway around the world is to fast-track her studies of Parkinson’s disease by using a new kind of experimental platform: genetically diverse mouse colonies known as the Collaborative Cross and Diversity Outbred populations.

A human is a terrible model for a human.

“Parkinson's disease is a neurodegenerative disorder that currently affects over five million people around the world,” Stephenson says. “It's a multifaceted illness with complex causes. Using models that are currently available we haven't been able to recreate the aspects of neurodegeneration and protein accumulation of human disease to the degree that enables an accurate and robust model that we can start to try to modify or prevent with drugs. Unfortunately, we haven't got there yet and it is slowing down the development of drugs that can slow or halt the disease progression.”

One of the reasons for that, she says, may be the genetic background of the mouse models currently being used.

The orthodox way to explore a particular gene of interest has been to study its effects in a standard inbred mouse. In principle, any increased susceptibility or resistance that the mouse may have to a given disease can be attributed to that specific gene variant. But it’s not so simple, for two big reasons.

First, different inbred strains produce “background effects” that modify the impact of a given gene on disease development. Human patient populations show their own background effects: Diseases caused by a single gene mutation, such as cystic fibrosis, vary widely in severity, due to variations in the patients’ genomes. Some patients’ so-called modifier genes suppress disease symptoms, while others’ exacerbate them, leading to more acute cases of the disease.

Second, the most common human diseases — such as cancer, heart disease and neurodegeneration — typically involve dozens or even hundreds of genes interacting. Modeling this complexity in a mouse poses extraordinary technical challenges.

So if studying a disease gene in one inbred mouse strain has limitations, could more strains provide more insights? In 2009 JAX Professor Ken Paigen, David Threadgill of UNC and colleagues conducted an elegant test of using multiple mouse strains to find genetic variants associated with adverse reactions to a drug.

They gave acetaminophen — a.k.a. Tylenol, the world’s most widely prescribed pain-reliever — to a panel of mice from 36 different inbred strains. While acetaminophen is safe and effective in most people, toxic liver damage is a side effect for some. The researchers discovered liver damage in some of the mice and connected that damage to specific gene variants; the human version of one of these variants, CD44, was already known to increase susceptibility to acetaminophen liver toxicity.

This “phase zero clinical trial” cost only about $100,000, Threadgill noted at the time the paper was published in the journal Genome Research, compared to estimates over $1 billion for getting a drug into phase one clinical trials in humans. "This approach could be used to determine early on if the drug is not going to be viable because of a high level of toxicity, or it could give important insights into whether the drug is likely to be beneficial,” he commented.

While Paigen and Threadgill were conducting their mouse panel studies, an even more sophisticated project to better model genetic diversity was in the works.

Ask JAX Professor Gary Churchill whether a mouse is a good model for a human, and he’ll likely answer, “No, but a human is a terrible model for a human.” Peoples’ genomes are so varied, in other words, that no one individual’s genome can truly stand in for all people. Properly designed populations of laboratory mice, on the other hand, can provide a powerful tool for teasing out the multiple gene variants involved in complex human diseases.

In 2004 Churchill, together with JAX Professor Elissa Chesler when she was at Oak Ridge National Laboratory and dozens of other leading laboratory mouse experts around the world (known collectively as the Complex Traits Consortium), devised the Collaborative Cross (CC): a mouse population established with eight different founder strains, including standard inbred strains but also some wild-type mice.

Today the CC concept (as well as a further refinement, Diversity Outbred mouse populations) is a big idea in the research community, with more than 1,400 citations in the scientific literature.

New advances in phenotyping and genome sequencing mean that researchers can quickly gain a sophisticated picture of how the action of a specific gene of interest varies in a diverse population. 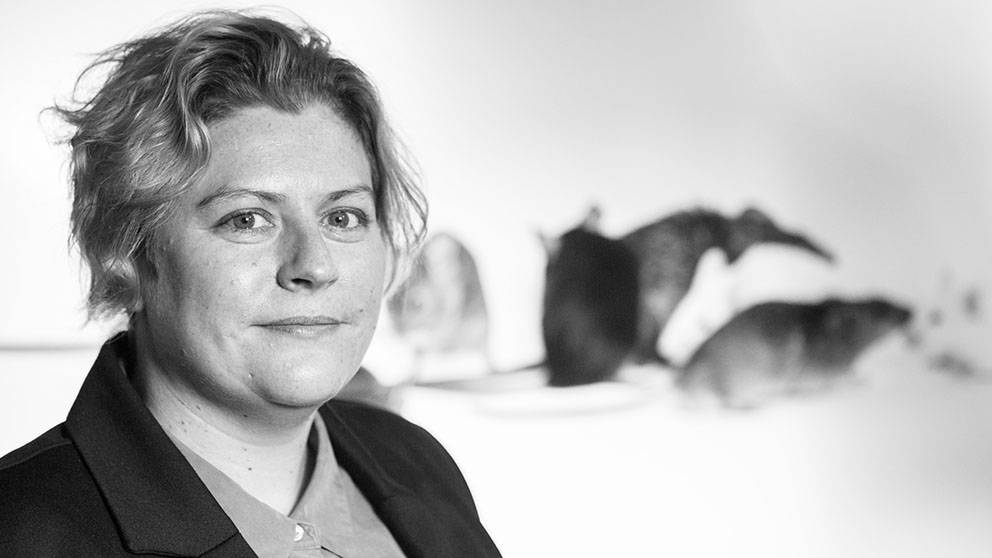 Stephenson leaves Bar Harbor for Australia the next morning and wants to touch base with some of her JAX colleagues. Joining Stephenson for lunch in the sunny dining area are Cat Lutz, a neuroscientist whose multiple roles include developing new mouse models for neurodegenerative diseases, and Stacey Rizzo, an expert in neurobehavioral phenotyping.

One year earlier Stephenson had heard a talk at Murdoch by JAX Scientific Director Nadia Rosenthal on CC mice. “Nadia’s work set off lightbulbs," she says. "I could instantly see the potential of these mice to the future of Parkinson’s disease research. So I went and spoke to her. We said, ‘Let's keep in touch.’ Then I spoke to a collaborator, David Finkelstein, an expert in preclinical Parkinson’s disease models, and was awarded some funds from a philanthropic organization called Parkinson’s Victoria. That's when the real work started, because then we had to start organizing the CC, and work with Stacey and Cat to get things going.”

Parkinson’s disease is thought to result from a person’s life history – the interaction between their genetic background and the environment in which they live. The incidence of Parkinson's is about two in 100 people over the age of 65, she says. “If you line up 100 people of completely different genetic backgrounds, it is likely that only a handful of them will have the potential to develop Parkinson's disease, and only 2 will develop the disease. We predict that there's going to be a similar susceptibility and resistance in mice. If we're studying a mouse model that never has the potential to develop a disease that reflects the human condition, we're wasting our time.”

Lutz agrees. “From my experience working in drug discovery, what's contributed significantly to the failure of drugs is that we've been doing all the drug studies in the inbred mouse, which genetically speaking represents only half of one person with a disease or condition.

Rizzo will screen a cohort of CC mice for physical signs of susceptibility to Parkinson’s disease. Stephenson will subsequently study the best candidates for further study in search of a better model for Parkinson’s research in her own and other labs.

Stephenson’s analogy for this new approach to disease mouse model development is the difference between your old cell-phone and the latest smartphone. Traditional mouse models are “your Nokia 5210, and that’s a great phone: it's solid, has a battery that last a week, you can play Snake on it, you can call your friends, you can text message. It has all the basic functions, but you can do so much more on a smartphone, the CC.”

Stephenson draws a further analogy between JAX and the Large Hadron Collider, where scientists can bring their experiments to a facility with matchless infrastructure. “I visited a lab at the National Institutes of Health [in Bethesda, Md.], a huge lab with six principal investigators, more than 50 people, state-of-the-art equipment and plenty of funding. And they told me that for what I wanted to do, ‘You can only do that at JAX.’”