Some cancers are associated with inflammation and infection. The possible role of the microbiome — the bacteria, fungi and viruses living on and in us — in cancer is an intriguing area for research, but it remains largely unexplored. 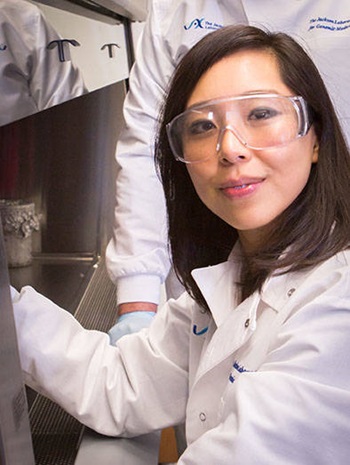 Assistant Professor Julia Oh, Ph.D., recently received a prestigious four-year, $792,000 grant to investigate the relationship between the skin microbiome and a common skin cancer known as cutaneous squamous cell carcinoma (cSCC). The number of cSCC cases has risen quickly over the past 30 years, and nearly a million cases were diagnosed in 2015. While the primary cause of cSCC is UV exposure from the sun or tanning beds, it can also arise from skin infections or chronic inflammation, implicating the skin microbiome as a factor that influences a person’s susceptibility to cSCC, as well as variation in disease progression and therapy effectiveness. If the microbiome has a direct effect on cSCC, it provides a promising new treatment avenue.

A fundamental understanding of the relationship between the skin microbiome and cSCC is needed first, however. Oh will investigate exactly how the skin microbiome affects cSCC and if it can be a target for tumor-modifying therapies. For example, if some microbes are found to accelerate cSCC formation, removing them from the skin would reduce risk. Early work indicates that Staphylococcus aureus, a common agent of infection, is found in many cSCC tumors and offers a promising candidate to test elimination. In another scenario, beneficial microbes may help tune the immune system in a way that primes it to attack tumors. Increasing those microbes through probiotic treatments would help eliminate existing tumors.