The pathophysiology of ischemic stroke involves a significant inflammatory component in which immune cells are recruited into the brain parenchyma following injury.  The origins and roles of the specific cell types that mediate tissue damage and repair, however, are not well-understood. The contribution of intestinal commensal microbes to immune system ontogeny and ongoing regulation is well-recognized, and the gut-brain axis has emerged as a potential therapeutic target for disorders of the central nervous system. T regulatory (Treg) cells in the intestine reduce inflammation and suppress proliferation of IL-17–producing γδ (IL-17+ γδ) T cells. Both cell types have been implicated also in the pathogenesis of cerebral ischemia. A May 2016 study published in Nature Medicine from the Anrather research group at Weill Cornell Medical College in New York reveals a potential mechanism by which changes in the gut microbiota alter outcomes following ischemic stroke by modulating intestinal IL-17+ γδ T cells numbers and function (Benakis et al., 2016).

In the Anrather study, mice with different gut microbiota were established by treating 7-week old male C57BL/6J (Stock# 000664) mice for two weeks with antibiotics to select against flora sensitive to amoxicillin and clavulanic acid (ACSens). A set of mice with a qualitatively similar flora to naïve mice, but whose gut microbiota was insensitive to the antibiotics was established also. These “seeder” mice were co-housed with naïve mice so that the naïve mice could be treated with antibiotics and also pick up the antibiotic-resistant flora (ACRes) through co-housing and coprophagia. This approach addressed potential off-target effects from the antibiotic treatment.

The mice with ACSens and ACRes flora were then given transient middle cerebral arty occlusions (MCAO) to induce stroke. The mice with ACSens flora showed a 60 ± 6% reduction in infarct volume and improved sensorimotor function over the mice with the ACRes flora, as measured on days 3 and 7 following the injury. To determine if these effects were directly mediated by the microbiota, naïve mice were given fecal transplants from the ACSens or ACRes mice. This was accomplished by first treating the mice for three days with antibiotics to create a microbial niche for the transplants. These mice received MCAO-induced injuries two weeks later. Similar to the ACSens mice in the first study, the mice that received the ACSens flora transplants had a 58 ± 8% reduction in infarct volume at 72 hours post-injury.

The neuroprotection observed in association with the ACSens flora at two weeks post-injury coincided with a temporary shift in gut lymphocyte frequencies. Flow cytometry analysis of cell populations from the lamina propria of the small intestine revealed that the mice with the ACSens flora and reduced infarct volumes had increased numbers of Treg cells and decreased numbers of IL-17+ γδ T cells. Similar analyses of the immune cells in the brain revealed that the mice with the ACSens flora had fewer infiltrating cells – particularly neutrophils - at 2 and 3 days post-injury. This correlated with reduced brain expression of Cxcl1 and Cxcl2 at 24 hours post injury.

Because IL-17 is known to stimulate Cxcl1 and Cxcl2 expression, the Cornell researchers next sought to quantify the number of IL-17-producing cells in the mouse brains following injury.   To do this, they treated C57BL/6-Il17atm1Bcgen/J (Stock# 018472) knock-in mice that express green fluorescent protein (GFP) from the endogenous IL-17a promoter with the same induction protocols described above to create mice with ACSens and ACRes flora. Following MCAO injury or sham surgery, flow cytometry was carried out on the brains and meninges. Significant numbers of GFP-positive IL-17+ γδ T cells were found in the meninges of mice with ACRes flora.  IL-17 protein levels were higher in these mice, too. C57BL/6-Trdctm1Mal/J (Stock# 016941) knock-in mice, which express GFP from the endogenous T cell receptor delta chain locus, were similarly treated and were used to track γδ T cells within the meninges. Results demonstrated that 16 hours after MCAO induction, GFP-positive γδ T cells primarily accumulated in the leptomeninges.

STOCK Tg(CAG-KikGR)33Hadj/J (Stock# 013753) mice were then used to show definitely that the origin of the γδ T cells was the small intestine. This strain ubiquitously expresses Kikume Green-Red (KikGR) fluorescent protein, which can be converted from green to red when exposed to violet light. A laparotomy enabled exposure and conversion of cells residing in the small intestine without labelling peripheral cells.  One week after laparotomy, MCAO injuries were performed. Sixteen hours after the injury, KikR+ cells were found in high frequencies in the meninges, but not in the cervical lymph nodes, suggesting that the gut-derived T cells preferentially home to the meninges following stroke. The trafficking of intestinal lymphocytes to the meninges was an unexpected finding that has not previously been reported.

The same AC-induction and MCAO injury protocol was applied to STOCK Il17atm1.1(icre)Stck/J (Stock# 016879) and B6.129P2-Il10tm1Cgn/J (Stock# 002251) mice to create ACSens and ACRes flora in IL-17a and IL-10 null mice, respectively. Infarct volumes were the same in ACSens and ACRes  IL-17 null mice, suggesting that IL-17 is necessary for the microbiome-mediated protection against ischemic injury in this model. Similarly, the antibiotic-treated IL-10 null mice did not recapitulate the neuroprotection following injury that was observed in the wild-type mice with ACSens flora. Further, IL-17+ γδ T cell numbers were the same in IL-10 null mice with either ACSens or ACRes flora. 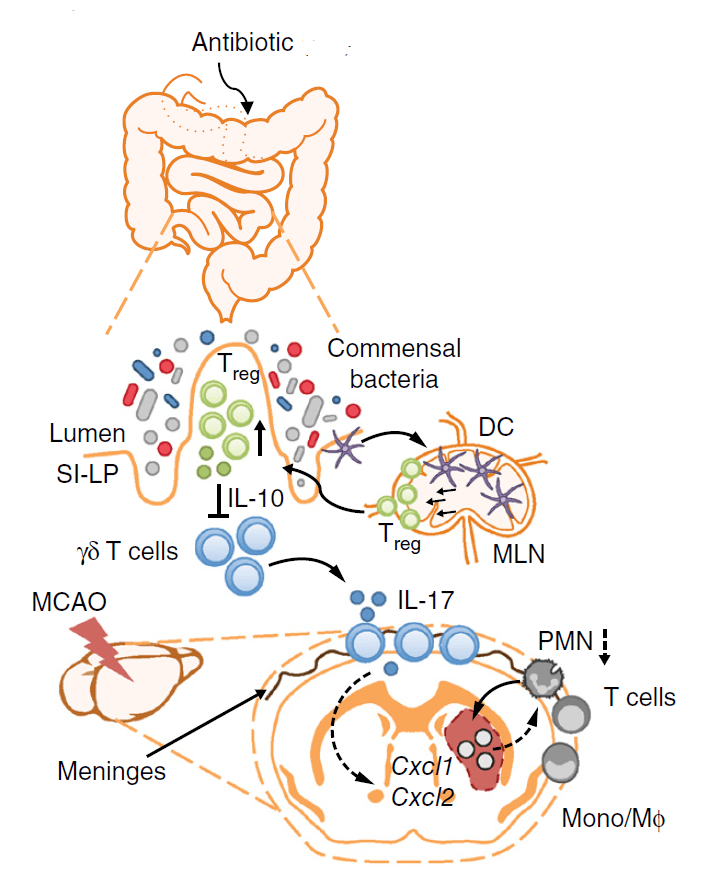 The results of this study suggest a mechanism outlined in the Figure above, in which antibiotics induce an expansion of the Treg cell compartment to produce IL-10-dependent suppression of IL-17+ γδ T cells. As a result, fewer of these cells are available to be recruited to the meninges following ischemic injury, reducing the degree of peripheral immune cell recruitment into the brain parenchyma and affording neuroprotection and reduced infarct volumes. The findings provide new insight on the pathogenesis of ischemic injury and raise a novel possibility that the microbiota might offer clues for predicting outcomes for patients at risk or recovering from stroke.