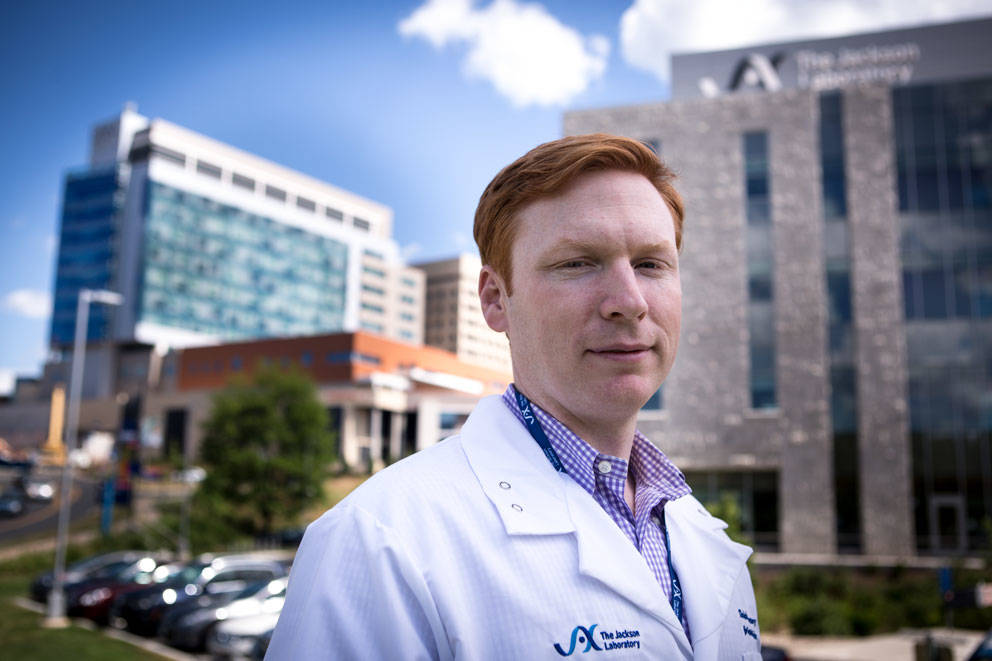 Some of the most transformative discoveries happen when different disciplines come together.

Indeed, these “scientific borderlands” can be particularly fertile ground for physician-scientists, like J. Travis Hinson, M.D., who blend clinical medicine and biomedical research to tackle important problems in human health. Hinson joined the faculties of The Jackson Laboratory and UConn Health as an assistant professor some six months ago, and is applying interdisciplinary tools and approaches to understand inherited forms of heart disease, especially disorders that affect cardiac muscle cells (known as cardiomyopathies).

I wanted to do science that made a difference in people’s health.

“In academic medicine, we identify people as being a ‘triple threat’ if they have excellence in research, clinical skills, and teaching — because that’s our tripartite mission. And yet, these individuals are increasingly rare, as it grows harder and harder to do everything,” explains Thomas Michel, MD, Ph.D., a cardiologist at the Brigham and Women’s Hospital and professor at Harvard Medical School who mentored Hinson during his clinical and research training. “Travis is one of the few individuals, of really any generation, who has outstanding accomplishments in all of these areas.”

Hinson moves so seamlessly between fields perhaps because his own career began at the intersection of multiple scientific specialties. As an undergraduate at the University of Pennsylvania, he took a summer internship at DuPont in New Jersey to pursue his interests in chemistry and engineering. But he soon realized his passion for science needed a real-world focus. “While I loved science, I didn’t necessarily love science for the sake of making chemicals for the automotive industry,” says Hinson. “I wanted to do science that made a difference in people’s health.”

That same summer, he decided to delve into clinical medicine by volunteering in the emergency department at a local hospital. One day, while shadowing the cardiologist on duty, a patient was wheeled in, clearly in distress and suffering from a heart attack. Unfazed, the doctor sprang into action.

“I was immediately impressed, not just by his understanding of medicine but also by his calm, cool, and collected approach,” recalls Hinson. “When everyone else was basically freaking out, he was very comfortable. I really respected that.”

Those early clinical experiences also cemented Hinson’s interest in the heart. “It’s a relatively simply organ, in the sense that it pumps blood. Really all of its function is around that capability, which is something I was very familiar with from my engineering studies,” he says.

Drawn to the lab

When Hinson returned to college after that formative summer, he switched his major from engineering to chemistry. He also joined the laboratory of Robert J. Levy, MD, a pediatric cardiologist and researcher at The Children’s Hospital of Philadelphia. There he worked on a project harnessing gene therapy techniques to make artificial heart valves and other cardiovascular devices more durable. Through this early foray in biomedical research, Hinson not only deepened his interest in basic science, he also began to appreciate how rewarding and intellectually satisfying the work of a physician-scientist could be.

So, after earning a bachelor’s degree in 2002, he moved to Boston to begin medical studies at Harvard Medical School. Even before classes began, he was back at the laboratory bench — this time under the mentorship of Christine Seidman, MD a cardiologist and human geneticist who runs a lab jointly with her husband, Jonathan Seidman, PhD.

Although a primary focus of the Seidmans’ research is heart disease, Hinson chose to lead a project focused on a rare, inherited syndrome known as the Björnstad syndrome, which is characterized by hearing loss and twisted, brittle hair. At the time, little was known about the molecular causes of the disorder, although the genetic culprits were thought to reside within a large swath of chromosome 2. Using genetic mapping techniques and DNA sequencing, Hinson homed in on the precise mutations, which map to BCS1L, a gene that functions in the assembly of key protein complexes in mitochondria, the cell’s powerhouse.

In addition to casting light on disease biology, he also got an early glimpse of the power of genomic information. “I was fascinated by the potential for understanding new genes that cause human diseases, and how important that was to mankind.” His research on the Björnstad syndrome was published in the New England Journal of Medicine.

After earning his medical degree in 2007, Hinson went on to the Massachusetts General Hospital, where he trained in internal medicine, gaining broad skills in multiple clinical areas, including cancer, infection, and cardiovascular disease. He then completed two years of subspecialty training in clinical cardiology at the Brigham and Women’s Hospital. 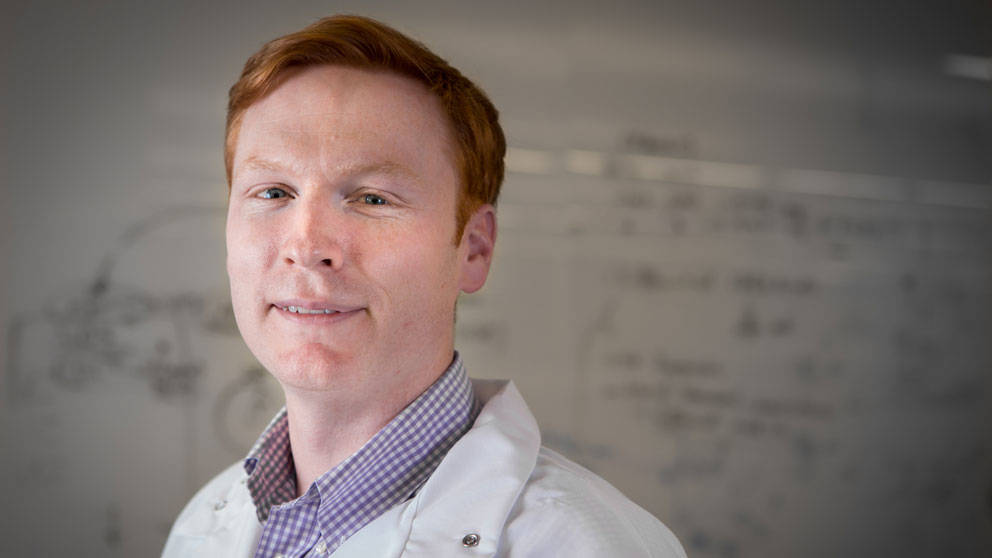 Matters of the heart

Through his diverse training in science and medicine, Hinson realized that there were some significant stumbling blocks to gathering a deep, nuts-and-bolts knowledge of heart disease, particularly the cardiomyopathies. “One of the things that was clear through all of my experiences with heart disease was that we couldn’t figure out anything mechanistically because we had no in vitro system to study the heart.”

Cardiac muscle has essentially two paths toward dysfunction and ultimate failure. It can either dilate — become abnormally large and distended — or it can thicken. Both routes severely impair how well the heart performs as a pump, sending blood to the lungs, where it takes up oxygen, and then throughout the body. These conditions, known as dilated cardiomyopathy (DCM) and hypertrophic cardiomyopathy (HCM), can stem from pre-existing disorders of the heart, such as coronary artery disease, or from DNA mutations.

Fueled by advances in genomics over the last two decades, more than 40 genes have been identified that underlie cardiomyopathy. But unlike diseases such as cystic fibrosis or sickle cell anemia, where it is fairly common for affected individuals from different families to carry the exact same genetic typo, it is exceedingly rare for unrelated patients with cardiomyopathy to share the same mutation. With such a complex genetic architecture, figuring out how the different genes and gene mutations contribute to heart disease has been an enormous challenge.

Because of this formidable hurdle, drug discovery for the cardiomyopathies has languished. “There really has not been a paradigm-shifting drug developed for heart failure in the last 20 years,” says Hinson. Moreover, the few treatments that do exist are primarily aimed at controlling patients’ symptoms, not slowing or halting their disease.

Hinson aims to improve this picture. Using a novel system he pioneered during his postdoctoral fellowship, he and his team are now unraveling the effects of genetic mutations on cardiac biology. “We basically try to rebuild a little piece of a patient’s heart in a dish,” he explains.

He combines cardiac muscle cells with support cells, such as fibroblasts, and other key factors, including extracellular matrix proteins. Although these tiny, three-dimensional structures do not pump blood, they do contract rhythmically, and their pace of beating can be regulated.

Importantly, this system harnesses multiple recent advances in both stem cell and genome editing technologies. With these capabilities, Hinson and his colleagues can isolate skin or blood cells directly from cardiomyopathy patients and coax them to form heart muscle cells, making it possible to study the biological effects of patients’ own mutations. Moreover, he can correct those mutations, or create additional ones, to further probe how genetic differences influence heart biology.

Part of the allure of Hinson’s heart-in-a-dish approach is that it can be readily applied to study other forms of heart disease. It can also be leveraged for drug discovery, providing a platform to screen and test compounds with therapeutic potential in a wide range of cardiovascular diseases.

The promise of precision medicine

In addition to his research lab based at JAX, Hinson continues to practice cardiology at UConn Health. He helps run a specialized clinic focused on genetic forms of heart disease, including cardiomyopathies, as well as arrhythmias, connective tissue disorders, and other conditions.

“We have an exciting opportunity to provide clinical services in cardiac genetics in the corridor between New York and Boston,” he says. That means state-of-the-art genetic testing, including gene panels and genome sequencing, as well as genetic counseling for both patients and family members to help inform disease diagnosis and guide treatment. Although there are only a handful of treatments now available, Hinson believes this clinic will be uniquely poised to take advantage of a new generation of personalized treatments that are precisely tailored to patients’ specific gene mutations.

We have an exciting opportunity to provide clinical services in cardiac genetics in the corridor between New York and Boston.

He adds, “It is important for the community to know that many of our patients can be taken care of with their existing providers, once we do our evaluation.” He encourages other healthcare providers in the area to contact him if they suspect their patients suffer from a heart condition with a genetic basis.

“Travis really is a quintessential physician scientist,” says Bruce Liang, MD, dean of UConn School of Medicine and director of the Pat and Jim Calhoun Cardiology Center at UConn Health. “He has a remarkable ability to link basic science with important clinical problems, and his work holds a great deal of promise for developing new treatments for patients with cardiomyopathy.”

Liang adds, “I wish there were two or three Travis Hinsons.”