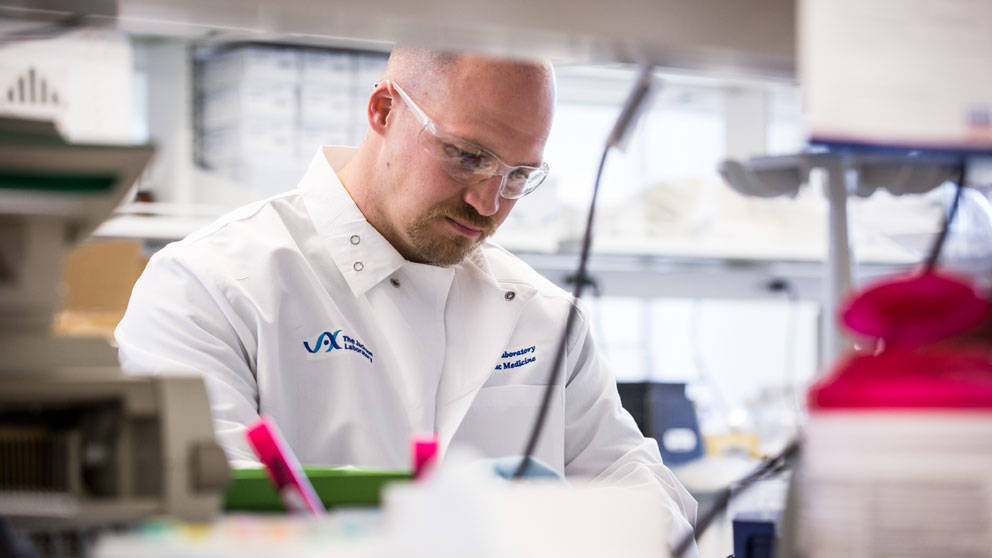 Adam Williams in the lab. Photo by Tiffany Laufer.

A long non-coding RNA, Morrbid, controls how long circulating myeloid cells live, which is key to maintaining the proper balance between fighting infection and exacerbating inflammation. The discovery offers a potential therapeutic target for certain inflammatory disorders, such as asthma, Churg-Strauss syndrome and hypereosinophilic syndrome, that are characterized by abnormal myeloid cell lifespan.

Circulating myeloid cells (neutrophils, eosinophils and so-called “classical” monocytes) are the first line of defense against pathogens. Though these are among the shortest-lived cells in the body, dangerous levels of inflammation can result if they live too long and grow too numerous, but the mechanisms controlling lifespan in these cells were unknown.

They discovered a novel lncRNA that tightly controls the survival of circulating myeloid cells and named it, appropriately, Morrbid (Myeloid RNA Regulator of Bim Induced Death). This lncRNA is conserved across species, including mouse and human, and is specific to neutrophils, eosinophils and monocytes.

Morrbid regulates lifespan by controlling the expression of Bim, a nearby gene that in turn controls apoptosis or programmed cell death in response to pro-survival cytokines. In other words, Morrbid overrides a signaling mechanism that prevents premature immune cell death.

Deleting Morrbid in mice led to a drastic reduction of myeloid cells that normally express this lncRNA, though other lymphoid and myeloid cell types (such as mast cells) were not affected. The mice had less ability to fight infection but gained protection against inflammation and immunopathology.

The human version of the gene, MORRBID, is dysregulated in patients with hypereosinophilic syndrome. The researchers note that this may represent a potential therapeutic target for inflammatory disorders that are characterized by aberrant short-lived myeloid cell lifespan.