JAX is bringing genomics education into the public-school classroom, the university curriculum, the workforce, and even physician education. JAX assistant professor Michael Stitzel mentored a Connecticut high school student in 2014 as part of the Laboratory's Teaching the Genome Generation ™platform.

Walt Nakonechny watches intently as Ingrid Burke manipulates a pipette between a rack of tiny vials and a petri dish, then ejects the tip with a click. Burke is new to this task but already has a crisp rhythm—vial, petri, click; vial petri, click.

Burke is not a lab technician but a science teacher at Northwestern Regional High School in Winsted, Conn. And Nakonechny, a former Connecticut high school teacher and bench researcher himself, is now the associate program director for genomic education at The Jackson Laboratory for Genomic Medicine, the first educator hired for the new facility in Farmington, Conn.

On this summer morning in the Laboratory's Bar Harbor training lab, Nakonechny and Burke are with 15 other northern New England science teachers attending a weeklong professional development program, "Teaching the Genome Generation," funded by Jane's Trust.

"The healthcare jobs of the future will be genome-based," explains Charles Wray, Ph.D., associate director for JAX Courses and Conferences. "So we need to prepare young people for careers in this growing field, as well as for being knowledgeable healthcare consumers."

The "teach the teachers" approach, adds Nakonechny, is an efficient way to bring greater understanding of the basics of genomics—molecular biology techniques, use of genome databases, and social, ethical and legal issues—to public schools. "These teachers can bring their knowledge back to their colleagues in Maine and Connecticut as well as their students," he says.

The workshop title, "Teaching the Genome Generation™," sums up much of Tom Litwin's grand plan for JAX Genomic Medicine's educational programs. Litwin, Ph.D., the Laboratory's vice president for education, and his team are seeking out new ways to bring genomics into the public-school classroom, the university curriculum, the workforce and even physician education.

It's been very impressive how well Anu, as young as she is, has grasped the concepts of our work and really understood them.

With the opening of JAX Genomic Medicine in Farmington, the Laboratory will expand its educational offerings, ranging from STEM (short for science, technology, engineering and mathematics) programs for pre-college students to predoctoral and postdoctoral training to courses, conferences and workshops for mid-career scientists.

Also available to Connecticut-area researchers are a symposium on the new field of immunogenomics and a course on new, 3-D genome mapping technology (charmingly known as ChIA-PET, for Chromatin Interaction Analysis by Paired-End Tag Sequencing).

For physicians, JAX has launched an online training program, "Family History for Cancer Risk Assessment, Testing and Management." Designed in partnership with the University of Connecticut School of Medicine and with the support of Maine Cancer Foundation, the course provides participating physicians with continuing medical education (CME) training in identifying patients at increased risk of a genetic syndrome, such as hereditary breast and ovarian cancer, who would benefit from earlier or more frequent cancer screening.

Some of the most innovative JAX Genomic Medicine education initiatives—some in the planning stages, some already in progress—involve close collaborations with Connecticut educational institutions.

"We're working with Farmington High School to integrate genomics education into their biology curriculum," Litwin says. "This includes offering a genomics track for senior capstone projects. We're also in the planning stages of a possible genomics workforce initiative for community colleges, with training, hands-on research opportunities and a possible career path to technical and administrative jobs at JAX Genomic Medicine."

But naturally, JAX Genomic Medicine's key educational partner is the University of Connecticut, and close working relationships have blossomed among JAX and UConn researchers.

At UConn's main campus in Storrs, a master's in science program now integrates JAX expertise and research opportunities. New professional science master's-degree programs in applied genomics and microbial systems analysis are designed for people interested in finding technical work in either of the two fields.

What differentiates the UConn program from a standard master's in science is a substantive workplace lab management component. "We try and educate these people as to what it would be like, for example, to be hired to be the lab manager of a research program, working for a principal investigator," says Michael Lynes, Ph.D., professor and head of the department of molecular and cell biology.

The program also offers training in new technologies, such as next-generation genome sequencing, for which expertise is a requirement for many jobs at JAX Genomic Medicine and at other academic research institutions and pharmaceutical and biotech companies.

"Working with JAX Genomic Medicine works out quite nicely for us," Lynes says, "because we have a growing need for internships, so that our students get workplace experience. And when the

match is right between student and employer, many of these internships turn into professional jobs."

Lynes has a connection to JAX that goes all the way back to his high school days, when he was a 1972 participant in the Summer Student Program in Bar Harbor, and he credits his JAX mentors with guiding him through graduate school and professional decisions throughout his career.

In 2013 the Laboratory offered the first Summer Student Program opportunities for high school and college students in the Farmington labs of JAX Genomic Medicine. In the summer of 2014 UConn senior Haley Strassner of Avon, Conn., was in the laboratory of Assistant Professor Duygu Ucar, Ph.D., and Glastonbury High School senior Anu Mathur of Glastonbury, Conn., was in Assistant Professor Michael Stitzel's lab.

Stitzel's lab had identified certain regulatory regions of DNA called stretch enhancers. Mathur says, "They most likely play a very important role in gene regulation and expression.” She studied a stretch enhancer in a particular gene that's associated with risk factors for type 2 diabetes, trying to determine what kind of transcriptional activity it has and what exactly it's doing to alter gene expression.

Because the program runs only 12 weeks, "Anu's project had to be small and finite," Stitzel says, "but it's actually an important piece in the overall work of our lab.

"For me it's been very impressive how well Anu, as young as she is, has grasped the concepts of our work and really understood them. When she did her practice talk for the final Summer Student Symposium at our lab meeting, I was pretty blown away with how clearly she explained her project."

Mathur says she had learned in her high school classes about some of the technologies used in genetics research laboratories, such as DNA-amplifying PCR (polymerase chain reaction), but getting to use them was "ridiculously cool."

She adds, "After this summer, I know I want to study biology or biochemistry. This is definitely contributing to what I want to do in the future." 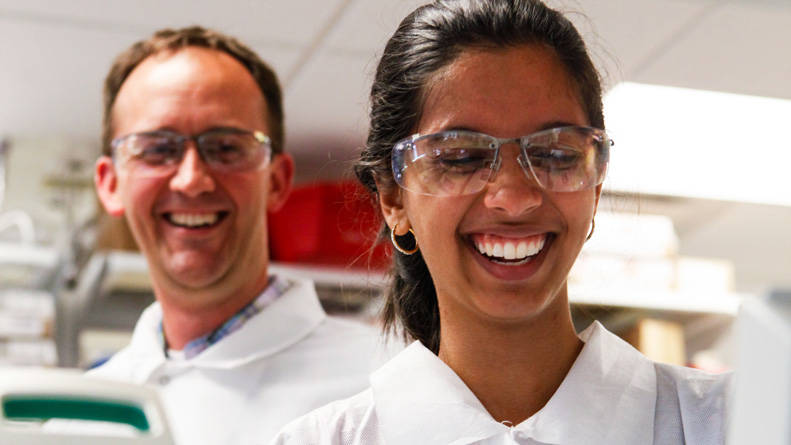 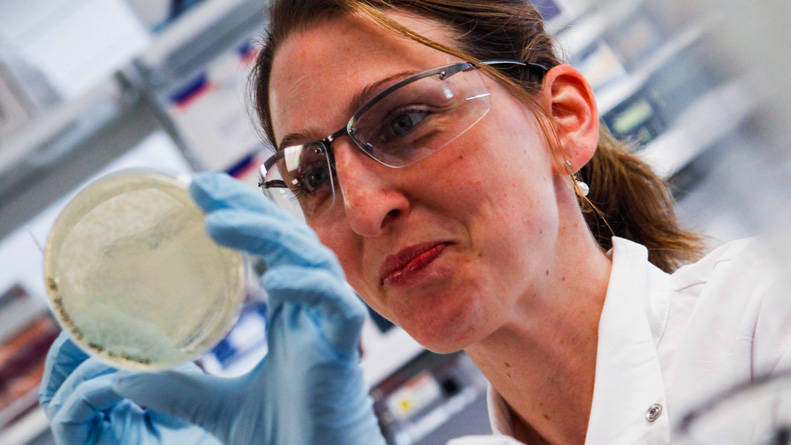 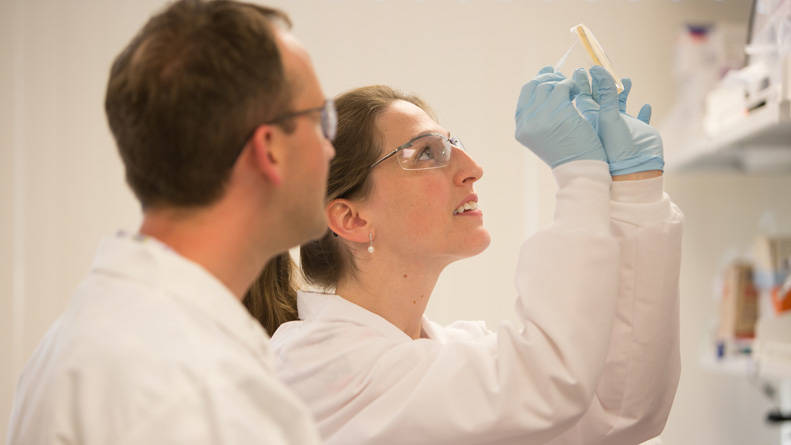 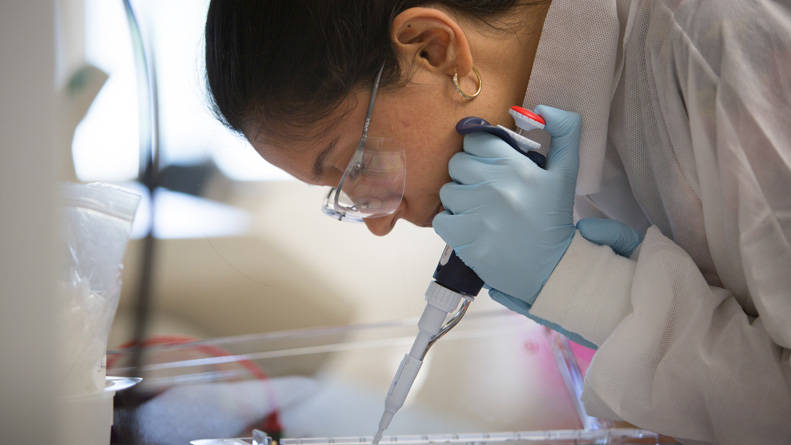