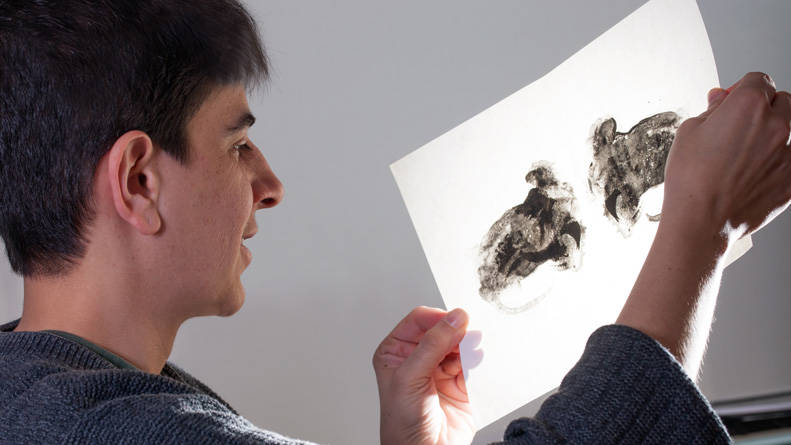 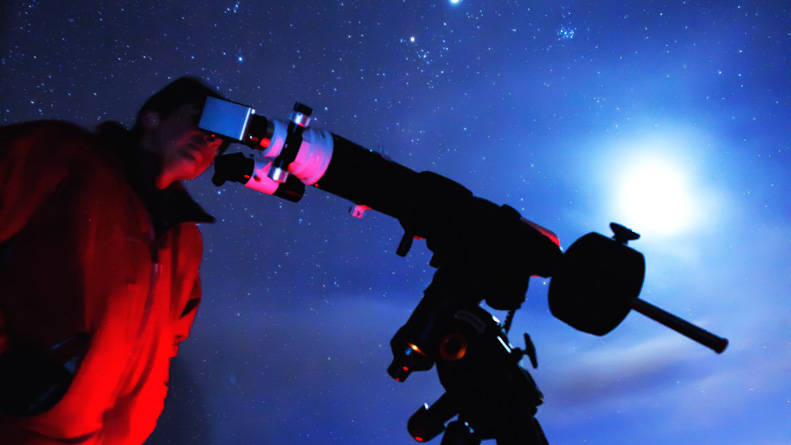 Do we know more about the farthest-flung galaxies or about what happens in our own heads?

It's hard to say—neuroscience rivals astronomy in scale and difficulty in many ways. Indeed, for Jackson Laboratory Associate Professor and enthusiastic amateur astronomer Elissa Chesler, Ph.D., the universe in all its vastness provides her with something that neurobehavioral research seldom does—predictability.

"With physics, there's the notion of discoverable laws that everything follows," she says. "And when you're looking through a telescope, it's a predictable system. In behavioral neuroscience we're trying to map abstractions onto biology. There's a reason that psychology is sometimes negatively cast as a 'pseudoscience.' We just don't know if there are discoverable laws governing behavior, but we do know that we can make reasonable predictions."

In essence, what we're trying to do is map mouse genes to the human condition, the human soul.

Chesler's ultimate research goal is to contribute to improved mental health care and therapies. The challenges are immense, but the effort is vitally important. Serious mental illness that results in significant functional impairment currently affects about 1 in 20 U.S. adults, according to the National Institute of Mental Health. Currently trial and error too often plays a significant role in mental health patient care. So while patients' needs are often pressing, precision is lacking.

Obtaining that level of knowledge is an interesting and daunting task. Chesler works with genetically defined mice in carefully controlled situations to limit the variables as much as possible and map behavioral traits to specific genes and genetic variations. Then mouse behaviors must be effectively correlated with human behaviors.

"In essence, what we're trying to do is map mouse genes to the human condition, the human soul," says Chesler. "We've worked very hard to develop research systems accurate and powerful enough to succeed, and we're beginning to see it pay off. It's an exciting time."

Chesler's fascination with the stars and planets predates her career focus. In elementary school she lacked a good telescope but was captivated by space, drawing constellations and building model rockets and looking skyward as often as possible.

As a new undergraduate at the University of Connecticut, however, she quickly gravitated toward neuroscience. A statistics course showed her a new view of science, in which facts are probabilistic. In other words, we don't really "know" what we claim to know; we just get close enough to say so. Also, a psychology/biology course at the same time captivated her with a look at the biological processes that lead to thought and behavior.

"Many things came together that made me very interested in neuroscience," she says. "In the end I was able to develop a new course of study at the university focusing on behavioral neuroscience, and I entered an M.D./Ph.D. program at the University of Illinois after graduation."

That doesn't mean she left her stargazing ways completely behind, however.

"During grad school there were a couple of really bright comets—Hale-Bopp was one of them," she says. "I often walked through an observatory on campus between my psych lab and the building where I took courses, and I'd take a look through the telescope when I could."

In graduate school, Chesler soon ran headlong into the difficulties of behavioral research. Our skulls may be relatively small, but there is a galaxy's worth of complexity inside them. There are an estimated 100 billion neurons in a human brain, with networks of interconnections between them that have nearly limitless scale and variability. External stimuli, slight changes in chemistry, minor differences in genes and their protein products, and many more factors can affect neuron function and connectivity.

Of course, one way to assess brain function is to observe behavior. But measuring and characterizing behavior—really measuring it, in correct, consistent and useful ways—is not easy.

"What we're trying to do is boil down behaviors to something clearly defined," says Chesler. "How do you define behaviors and disorders when they're not distinct? It's kind of a gray morass."

Chesler became acutely aware of just how difficult it is in the psychology lab at Illinois. She was gathering data on behavior, but what were the experiments really measuring?

"When I quantified all the measures of a single behavior ever taken in my advisor's lab, I found the data were more influenced by who did the experiment than the genetics of the mice he or she used," she says. "It was then that I decided to go beyond simple mapping of the genetic influences on behavior and initiated my first large-scale data mining."

Into the gray morass

Chesler concluded that conventional behavioral neuroscience never has enough numbers. That's an important reason why she was pulled toward research and away from medical practice. As an M.D./Ph.D. student, she faced a choice. She could work with a situation in which she felt both the methods of observing and measuring behavior, and the tools—the mice being observed and measured—needed improvement. Or she could work to improve the situation.

Even when you think broadly about biology, it's a very small world.

Chesler chose the latter path. She was, in her words, "fired up" after graduate school, to the point that she kept on with her research and never did complete medical school. So she set to work on method and resource development, from which she could obtain better data. And she needed huge amounts of data. The term "big data" is common now, but in the late 1990s she was entering a new field, one now called bioinformatics.

"I was looking at complex behaviors like addiction," says Chesler, "and I wanted to find the behavioral pathways and quantify the disturbances in them. But how can you separate out something like anxiety from addictive behavior when they are both present? Does one cause or strengthen the other? How do they relate? I needed to generate massive data sets about both behavioral traits and gene expression so the two could be analyzed and accurately correlated."

The resource development took shape in Chesler's early involvement with the Collaborative Cross (CC) project. The CC is a large-scale effort to develop a large panel of mice with precisely characterized genetics—and genetic variations—spearheaded by an international consortium of investigators including Jackson Laboratory Professor Gary Churchill, Ph.D. Chesler first worked on the project as a post-doc at the University of Tennessee, then led the production of the U.S. component of the population as a staff scientist and group leader at the Oak Ridge National Laboratory before coming to The Jackson Laboratory four years ago. During that time, a large part of her effort has involved work with the CC and other mouse model systems.

Now the improved tools and methods are starting to provide insights, both in Chesler's own work and in the work of other researchers throughout the world. Striking advances in genome technologies in the last decade are accelerating progress. But as gratifying as the progress is, the road to better medicine and better human outcomes remains unpredictable.

How can we work with genetics, biology and chemistry to overcome the tiny disruptions in the system that lead to mental health issues? It's a big question that Chesler is committed to answering. But perhaps it's not surprising that she seeks a different perspective on things from time to time.

"Even when you think broadly about biology, it's a very small world," she says, gesturing to her computer monitor. "Outside in the vastness, looking through my telescope, I get a sense of the huge system in which we are such a small part. And while all the online tools and Hubble images are nice, I like to go out there and find things myself, like a treasure hunt."