Is it possible to eat a high carbohydrate diet and yet stay lean? The answer is yes — if you're a particular type of mouse with a certain defective gene. In 2009, researchers at the University of California, Berkeley, recently discovered that a defective DNA-dependent protein kinase (DNA-PK) gene is responsible for keeping mice leaner than comparably fed mice with the intact gene (Wong et al. 2009). The discovery of this surprising role of DNA-PK in fat metabolism is like finding a key piece of a jigsaw puzzle after hours of searching.

"It turns out that DNA-PK is critical to a metabolic process we have been trying to understand for 20 years. For the first time, we have connected DNA‑PK to the signaling pathway involved in the formation of fat from carbohydrates in the liver. Identifying this signaling pathway involving DNA‑PK brings us one step closer to understanding obesity resulting from a diet high in carbohydrates, and could possibly serve as a potential pharmacological target for obesity prevention," said Dr. Hei Sook Sul, professor in UC Berkeley's Department of Nutritional Science & Toxicology,  head of the research team behind this finding (ALN 2009).

Two JAX® Mice strains played an important role in the team's discovery: B6.CB17-Prkdcscid/SzJ (001913), also known as scid (severe combined immunodeficient) mice, and C57BL/6J (B6, 000664), the most widely used mouse in biomedical research. The scid mice have a defective protein kinase, DNA-activated, catalytic polypeptide (Prkdc) gene, the new name for DNA-PK, and produce 90% less DNA protein kinase than do B6 mice. Previously, the Prkdc had been known for its role in DNA break repair and as a drug target in cancer therapy. Its role in fat metabolism was completely unexpected.

By comparing key biochemical reactions in the cells of fasted and fed scid and B6 mice, the research team was able to identify and describe the highlighted steps (formerly missing links) in the following feeding-induced insulin signaling pathway.

In scid mice, USF-1 phosphorylation and acetylation is attenuated, leading to a decrease in FAS transcription.

As part of their study, the investigators fed scid and B6 mice the equivalent of an "all-you-can-eat" pasta diet for 24 hours. When time was up, de novo lipogenesis in scid mice was 60% lower than it was in the B6 mice. The scid mice also had significantly lower hepatic and serum triglyceride levels. The research team concluded that scid mice are leaner and have a lower adipose tissue mass than do B6 mice because they have a long-term defect in feeding-induced lipogenesis.

"The missing link was DNA-PK [Prkdc]," sayd Wong, first author of the Cell paper. "We determined that DNA-PK [Prkdc] acts as a signaling molecule in the chain reaction that begins when insulin binds to receptors on liver cells. This helps explain why untreated type 1 diabetics, who cannot produce insulin, may experience significant weight loss. Without treatment, they basically have trouble making enough fat. This insulin-signaling pathway is also disrupted in type 2 diabetes, in which the body still produces insulin but the cells become resistant to its effects.” (ALN 2009)

As a result of the Berkeley scientists' work, scid mice, which are commonly used in cancer and immunology research, may now be a model system for studying insulin signaling and for testing novel therapies for obesity. 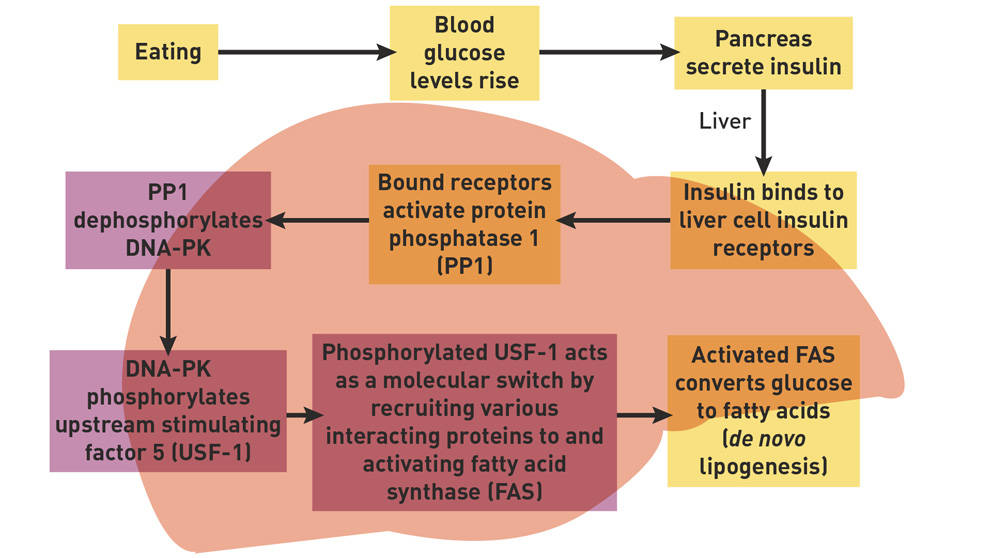