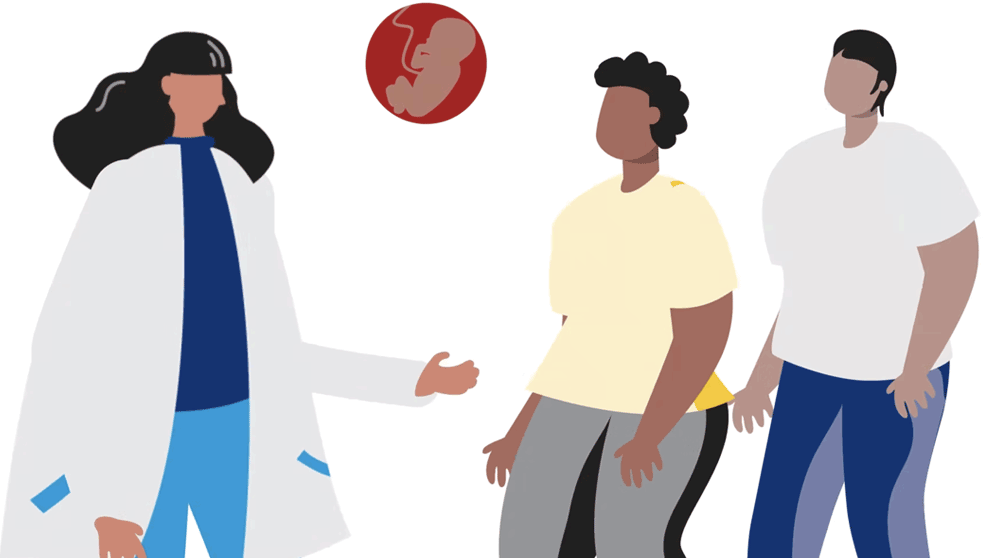 Health equity is achieved when every person has the opportunity to reach their full health potential, and no one is disadvantaged because of social position or other socially determined circumstances (CDC). Inequities that patients and families face can lead to higher incidence of disease and lower quality of life. This in turn can impact emotional, physical, and financial health. If you have patients in their child-bearing years, one concrete way to approach health equity is to discuss carrier screening for genetic conditions.

Inherited conditions can seriously affect newborns’ and young children’s health and life expectancy. Carrier screening, done before (ideally) or during pregnancy, identifies who has a greater chance of having a child with one or more of these conditions.  Individuals and couples may use carrier information to make reproductive decisions that align with their goals and values. All people planning for a family should have the opportunity to access this genetic information, regardless of their race or ancestry. They may then make decisions such as whether to have biological children, utilize reproductive technologies such as use of donor gametes or in vitro fertilization (IVF) and preimplantation genetic diagnosis (PGD), or undergo diagnostic testing during pregnancy to determine if a fetus is affected.

To learn more, we spoke with Aishwarya Arjunan (@aishuarjun), an expert in clinical genetics and public health genomics and an advocate for health equity in prenatal care. She told us that it’s important to acknowledge the roots of prenatal screening for inherited conditions. Historically, early screening programs were ethnicity-based, relying on a couple’s self-reported ancestry, race or ethnicity to determine which conditions to screen. In the 1970s screening began in the Jewish population for Tay Sachs, a disease in infants and young children that results in nerve damage in the brain and spinal cord, ultimately leading to death in early childhood. Screening for sickle cell disease, marked by anemia and pain crises, also began in the Black community in the 1970s. While both screening programs were initiated by stakeholders in their respective communities, in synagogues and Black Panther Party-created free medical clinics, sickle cell screening was soon fraught with mistrust. Mandated screening for sickle cell trait in some states and the military limited access to educational and employment opportunities, despite these carriers not having serious health concerns. Comparison of these very different experiences of ethnicity-based carrier screening has been written about extensively in the history of medicine literature and is of note because the disparities in these early screening experiences set the stage for promoting health equity through the lens of prenatal carrier screening.

Disparities in these early screening experiences set the stage for promoting health equity through the lens of prenatal carrier screening.

Although the incidence of many inherited conditions differs between racial and ethnic groups, Aishwarya advocates offering panethnic expanded carrier screening to all patients. In this approach, screening includes testing all patients for the conditions we’ve previously been testing for based on each individual’s self-reported ancestry along with a more expanded set of genes that is now available.

Panethnic screening addresses health equity in the most fundamental way, says Aishwarya. Our society is becoming increasingly multiracial, so that many individuals cannot report the ancestry of all four grandparents. Or when they do, often they are mistaken. As a result, when decisions about which test to use for screening are made based on one’s self- reported ancestry, the conditions screened are often not the most appropriate for the patient or their partner’s true ancestry. Panethnic screening allows for identification of carriers more broadly and not just in targeted groups.

There is no single guideline to help practitioners decide which carrier screening to offer their patients. As a result, genetic testing laboratories offer a range of test options to consider. Smaller panels include sickle cell disease (SCD) and other hemoglobinopathies, cystic fibrosis (CF), spinal muscular atrophy (SMA). Options for larger, expanded panels include genes related to hundreds of other conditions, allowing more rare diseases to be identified. The American College of Medical Genetics and Genomics (ACMG), in their most recent practice resource, recommend this comprehensive approach expressly for the purpose of addressing equity because it is “ethnic and population neutral.”

Aishwarya points out that there are still many unknowns. Large carrier screening panels may provide more useful information but will also include more variants of uncertain clinical significance (VUS), typically not reported in carrier screening results. Results identifying rare variants and VUS are more likely for patients in underrepresented populations because genomic data is largely derived from research participants of European ancestry.  “Until we understand the impact of the rare variants,” Aishwarya says, “the test performance is not equal for all. Still, it is better than what people in underrepresented minority communities currently are getting” (see Underrepresented, Underserved and Understudied).

To truly address equity, this will also mean offering the same care regardless of insurance coverage. Coverage for panethnic panels is not universal and some patients may only be able to access them by paying out of pocket, keeping them out of reach for lower income and uninsured patients.

Methodology also matters. Genes can be interrogated by genotyping (testing a specific list of known variants) and may not include risk variants in all populations. Genotype-based screening, Aishwarya tells us, therefore exacerbates inequity. For example, the most-used screen for cystic fibrosis (CF) is a 23-mutation panel. The CFTR gene associated with CF is an extraordinarily large gene, and over 1700 variants have been documented (ACOG). The 23 variants are derived from non-Hispanic white population data, and rare variants beyond these 23 are much more likely to be in non-white populations. This favored panel, therefore, has a lower detection rate in other populations (e.g., only 53% of individuals of Asian ancestry who are CF carriers would be detected vs. 88% of European ancestry). “Asian patients,” she says, “are getting lower quality care.  And they are most likely paying the same cost as everyone else even if the test performs differently in different groups. This an equity issue.”

How does the lower detection rate translate into less equitable care?  Consider the following patients. Bun Ma is a Thai woman who is considering starting a family with her partner. CF is an autosomal recessive condition. Her 23-mutation screen is negative, but it is still possible she carries a variant not assessed. Screening would not be recommended for her partner, even if he was in an ethnic group with higher carrier frequency (white or Ashkenazi Jewish). This couple is at higher risk due to the lower detection rate for Asian patients.

Consider another example: Reggie is a Black male patient whose partner screened positive for a CF variant. Reggie would not necessarily be screened using more comprehensive gene sequencing, and if he carries a rare variant, the couple’s future children would have a 1 in 4 chance of being affected with CF. If we aren’t using full gene sequencing that can detect rare variants for patients like Bun Ma and Reggie, then we aren’t identifying people whose children may be at risk of the disease.

Learn more about the benefits and limitations of carrier screening

While professional societies recommend carrier screening be offered to everyone considering pregnancy, it is optional and may not be right for everyone. Shared decision-making between the patient and their provider is integral when offering carrier screening. To learn more about the benefits and limitations of carrier screening and supporting patient decision-making, please access our recently updated module: Precision Medicine for Your Practice: Carrier Screening. Free CME and CNE is available.

We also recommend you put the following recent article on your reading list: Addressing Reproductive Healthcare Disparities through Equitable Carrier Screening: Medical Racism and Genetic Discrimination in United States’ History Highlights the Needs for Change in Obstetrical Genetics Care. We can’t move forward unless we know where we’ve been. The historical perspective Aishwarya and co-authors explore not only provides the context for decisions about carrier screening but also will help you to better understand how we can move forward to promote equity in other areas of patient care.