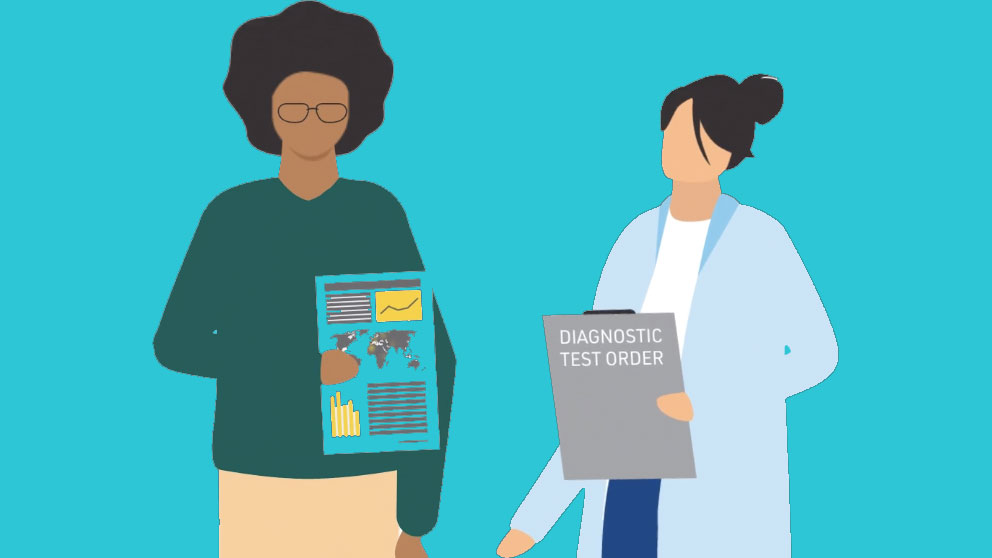 Why do millions of Americans and others around the world participate in consumer genomics? For many, testing provides a window into their innermost self, their genome, and a new way to learn about themselves. Information from these tests can be fun or may have deeper meaning for them: a chance to learn about their ancestral roots, connect with unknown relatives, or learn about their health histories.

“In general, if the result, in and of itself, is going to change management for the patient, then this is a result you will need to confirm clinically.”

Health information from consumer genomic testing is moving into the clinical world. While consumer tests have included variants associated with “wellness” traits such as physical endurance and alcohol tolerance, increasingly, they include variants and genes related to increased disease risks, carrier status for certain genetic conditions, or response to certain medications (pharmacogenomics).

People feel empowered to access genomic information on their own. Direct-to-consumer (DTC) testing was the first type of consumer genomic test, and it allowed individuals to access their own genomic information without the involvement of a healthcare provider. Now, tests offered by diagnostic labs, traditionally those used by healthcare providers and genetic specialists, are available to consumers.

Things change fast in this arena. Established companies continually add variants to their tests. The technologies used and regulations change. As a healthcare provider, how do you know if a result from a consumer genomic test will impact your patient’s management? That is where clinical confirmation through a diagnostic test comes in. Which types of consumer genomic tests should be confirmed? Well, it’s complicated.

Patients may be expecting their healthcare providers to guide them on how results may impact their care. Consider two such individuals.

The BRCA genes are two of the most recognizable genes in clinical practice. Mutations (pathogenic variants) in these genes confer a high risk of breast, ovarian and prostate cancer, among others.

What would your next steps be if your patient, Tamar, brought you a direct-to-consumer result that showed she carries the 6174delT pathogenic variant in BRCA2, one of the three Ashkenazi Jewish BRCA founder mutations assessed? Or if another patient, Matt, brought you his consumer-driven report from a different lab, facilitated by a staff physician, that sequenced select genes and showed he carries a mutation in BRCA2?

To sort through this, we spoke with experts at two well-known companies in consumer genomics, 23andMe and Invitae, to help us understand when confirmation is recommended.

Tamar received her BRCA2 result through a DTC company. 23andMe is one such DTC company, and one of the first to offer consumer genomic testing. As more health-related variants were added to their tests, the company began providing medical education and support for healthcare providers. Anne Greb is the lead medical educator and Stacey Detweiler is a medical affairs associate. In these roles, they develop clinical information and education about genomic results to help providers integrate personalized genetic information into patient care.

Not all DTC tests are in the medical sphere, and those that are require regulation

All laboratories performing diagnostic tests in the US are regulated through the Clinical Laboratory Improvement Amendments (CLIA). The objective of the CLIA program is to ensure quality in laboratory testing on human specimens for diagnosis, prevention, or treatment of disease. In addition, the FDA currently regulates DTC tests that provide information that could potentially impact health, requiring pre-market clearance prior to commercialization. Like the CLIA program, the FDA is interested in ensuring a test has analytic validity (it can accurately and reliably measure the genotype of interest). The FDA requires that DTC tests, which do not involve a healthcare provider in ordering or helping interpret results, demonstrate clinical validity (knowing what having or not having that genotype means for an individual’s health) and that consumers can comprehend key report concepts.

Stacey said that the FDA is starting to take a broader view, responding to the whole landscape. She sees this in how the FDA is carving out more paths for regulation. Again, it’s not so simple. Stacey drew our attention to recent FDA clearance for their recent pharmacogenomic report where, by further mitigating the risk of false-positive or false-negative results with additional analytic validation studies, 23andMe was able to remove language about clinical confirmation for a limited set of results. This new complexity means that providers “will need to look at the labeling for a particular report,”she said, if they see it involves a gene with clinical actionability.

As DTC has evolved, consumer interest in health-related information has driven an expanding list of potentially medically actionable variants included in the tests. Anne’s advice: “In general, if the result, in and of itself, is going to change management for the patient, then this is a result you will need to confirm clinically.”

For Tamar, if a BRCA2 pathogenic variant was identified through a DTC test like that offered by 23andMe, this could change medical management, including increased screening and risk reduction for the associated cancers. Therefore, clinical confirmation in a diagnostic lab is recommended.

Matt received his BRCA2 result through a company that also provides diagnostic testing. The decision to proceed with testing, selection of the most appropriate test for his goals, and counseling about the results likely was supported by a third-party doctor or genetic counselor, professionals contracted by the company.  As with Matt’s test, Invitae offers different ways to access genetic information: diagnostic genetic testing ordered by a patient’s clinician, or testing initiated by consumers and facilitated by clinicians. Consumers can choose from different test panels that include genes related to hereditary risk for cardiac conditions, cancer or a handful of other conditions determined to be medically actionable if detected.

At Invitae, Eden Haverfield is a medical geneticist and the medical director for consumer-driven genetic testing. For these “proactive” tests, clients are required to provide personal and family health history information at the time of ordering. She explains that this clinical context and the test selected are reviewed by clinicians. The test is run using the same equipment, bioinformatics and interpretation processes as their clinical testing. If a potentially actionable result is discovered, they will use the same processes to independently confirm the result before reporting to their client. Invitae aims to provide a consumer-driven program that is as close as possible to genetic testing in a clinical setting. Eden told us, “We’ve endeavored to create a medically responsible test that is comprehensive, affordable and understandable.”

For Matt, the BRCA2 pathogenic variant detected by this consumer-driven test would already have been confirmed as part of the original test ordered. Additional testing is not necessary, and planning for changes in management and a conversation about testing of relatives would be your next steps.

A caveat is that not all labs have aligned their consumer-driven testing as closely with their diagnostic testing. If the test report is signed by the lab’s medical director, usually a medical geneticist, or the fine print indicates the result was independently confirmed, you may be able to treat it as a medically actionable result. As with Invitae, the lab may have consultation services available for further guidance. You may ask any number of questions about the technical aspects of the test, interpretation of results, or next steps to identify guidelines.

In both conversations, the premise that we all own our own genetic data was a common thread. 23andMe states its mission is to help people access, understand and benefit from the human genome. Eden said that Invitae developed their consumer tests to increase access for people who otherwise would not have had access before. Many factors can be barriers to genetic testing. Eden enumerated some of these for us. “It may be that they do not live near a large center that has genetic services. Or they may have a clinician who either feels uncomfortable in placing an order for genetic testing or may lack the knowledge to feel comfortable with testing in general.” Consumer genomic testing increases access for patients, after which their providers may need to assess the test methods used and involvement of a healthcare provider. Patient and provider support is available from many consumer genomic labs to help people better understand their results.

Individuals may enter into consumer genomic testing with different goals. Perhaps Tamar was more generally motivated or participated with a sense of entertainment, while Matt may have had a more specific goal to better understand his personal health risks. In both cases, identification of increased cancer risk allows them, potentially others in their families, and their healthcare providers an opportunity to take action and promote good health.