Cancer evolution and the future of therapy - Interview with Ramanuj Dasgupta 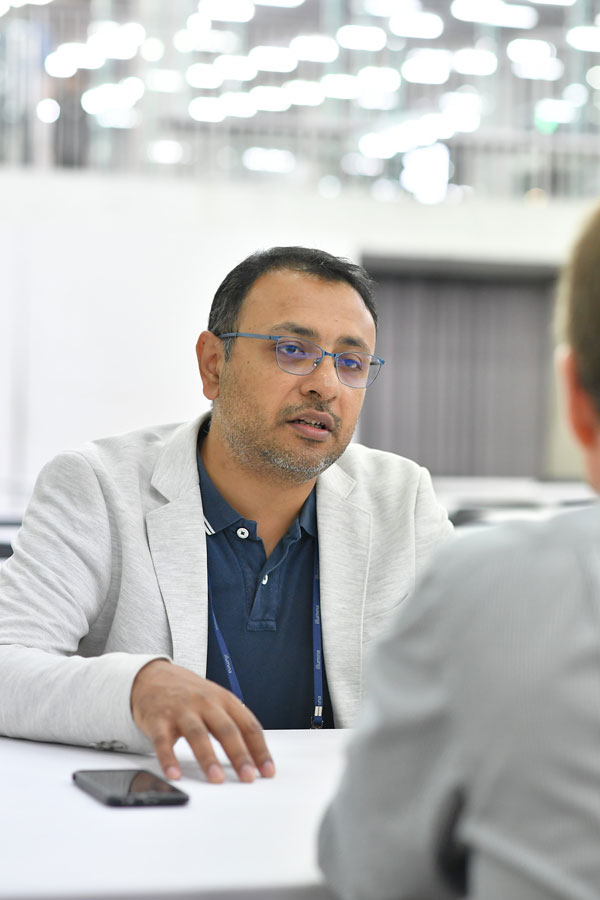 Ramanuj Dasgupta received his Ph.D. in developmental biology and genetics from the University of Chicago in 2002 and went on to complete a postdoctoral fellowship at Harvard Medical School. He then started his lab at the NYU School of Medicine, where he remains a research associate professor, before moving to his current position as Senior Group Leader at the Genome Institute of Singapore (GIS) in 2014. Dr. Dasgupta’s primary research interest is cancer evolution and how it’s shaped by selection pressure, the tumor microenvironment, and other factors.

Mark Wanner was able to catch up with Dr. Dasgupta in Seoul, Korea, this past April, where he received the 2019 Chen Award of Excellence at the Human Genome Meeting.

Mark Wanner: Your primary interest is investigating how various pressures, including selective pressures, affect evolution and divergence within a tumor cell population, correct? How did you become interested in that research area, and what are you working on now?

Ramanuj Dasgupta: Yes, that's right. I was trained as a developmental biologist, and in some ways, what we're really trying to do is study the developmental biology of cancer. When I started my lab in New York, actually, we were much more focused on signaling pathways that are associated with cancer. But about five years ago, when I was recruited to GIS, it moved from pathway-centric to more of a question-centric research program, and we are now somewhat pathway-agnostic. The main questions that we want to look at concern the mechanisms of therapy resistance and metastasis under selection pressure, such as from drugs.

MW: Cancer immunotherapy is the big deal right now, but it seems to be very variable, how the tumors respond to it. And does that have a lot to do with not just the tumor itself, but with it, the microenvironment?

RD: Exactly, that's what we see. This is pretty much early days for immunotherapy, and we are beginning to explore what happens to the microenvironment upon the selection pressure of immunotherapy drugs. It's been suggested in the literature—and there are some really interesting papers out there—that stromal cells, such as fibroblasts or even macrophages, could either promote or themselves express PD-L1, to generate an immunosuppressive microenvironment. So it's not just the tumor cells, there are many of the microenvironmental cells that could function to suppress the T cells. Or they could be influencing immune exhaustion, or the expansion of cytotoxic T cells and their infiltration and recruitment into the tumor microenvironment.

As a result, it becomes really important to study what's happening to the entire tumor and microenvironment holistically, rather than just the tumor cells themselves. One thing that we are trying to do is to re-create these complex microenvironments in a dish so you can study these interactions and functionally manipulate them in vitro to gain more mechanistic insights. This involves co-culturing of different microenvironmental cells with tumor organoids. We hope that building these assays will eventually allow us to visualize T cell recruitment, infiltration, and immune-mediated killing. But again, like I said, these are early days.

In Singapore, we are working very closely with clinicians to see how can we help patients in the clinic right now, when the majority are still getting standard of care drugs that haven’t changed in several decades. That said, not much has been explored in terms of how the standard of care drugs may be influencing the microenvironment. We generally focus on the tumor cells, but there is much to be done to understand how they interact with their environment within the patient, and how such regulatory interactions may alter upon treatment.

MW: And that’s just one part of the system. You mentioned selection pressures before. What form does that take, with changes in the tumor driven by therapy?

And I think this is a really important point, because what we find is that when we just do exome sequencing in the resistant versus primary-treatment-naïve tumors, we don’t find any significant differences. The transcriptome however is substantially altered. Much of that we could explain by the observed alteration of the epigenetic architecture. We find the epigenome plays a really important role. So, from a tumor-intrinsic view point, I think we would probably need to explore rationally designed combinatorial treatments using epigenetic drugs together with the current standard of care, cytotoxics.

MW: You're setting up these systems, and you say it's early days for the field. If things are working well for you over the next few years, what do you think will be the most important areas of progress, for either research or clinical applications?

RD: I think for research the main thing is to make use of all available technologies to first learn how to predict any given cancer's next evolutionary move. And that means understanding the mechanisms that drive evolutionary trajectories under any selection pressure. If we can predict how cancers evolve, then we should be able to come up with solutions that could be used to intervene, and therefore delay, block, or prevent the emergence of resistance or metastatic phenotypes.

In the majority of the cancers, patients don’t succumb to the primary tumor. Usually, it's progression into metastatic/malignant disease that is the major cause for cancer-related mortality. And as we work on cancer evolution, and think of cancer as an evolutionary system, we've come to realize that perhaps the initial curative intent in the clinic can drive the tumors to evolve into more sinister forms. We need to figure out mechanisms that we can use to prevent or delay the evolution of resistance, so we can convert cancer into something that can be chronically managed instead.

MW:  One last question. You’re talking about making cancer a manageable disease rather than a progressive disease. Would that involve disrupting some signaling that might be crucial to metastasis, or that sort of thing? How would you apply your knowledge of microenvironmental and epigenetic factors?

RD: With metastasis, there is a classical question that people have been working on for a very long time: is it the seed, or the soil? I think the seed can be instructive in changing the soil—microenvironment—but so can the soil change the behavior of the seed—tumor cells. But why is it that if we provide three different soils, one particular cancer will only go to soil 1, instead of going to soil 2 or 3? For example, why do breast cancers preferentially go to bone? Why do colorectal cancers usually metastasize to the liver first, and then move to the lungs?

From a basic biology standpoint, I think much of the research is moving from simply understanding the tumor cell to investigating its cell-to-cell interactions. How do tumor cells interact with other tumor cells as well as with the stromal/immune cells of the microenvironment? How do such interactions make them more malignant or aggressive?

In tumor cells, the molecular phenotype is determined by the transcriptome. And the transcriptome is regulated by the epigenome. And much of this epigenome could be regulated by signaling instructions from the tumor microenvironment. Which is why I think you need to go upstream to explore whether we can alter or target the tumor microenvironment in a way that, independent of the mutational status of the tumor, we can instruct the tumor to stop growing or be more prone to be targeted by the body’s own immune system.

The cells might still be there—you may not necessarily have killed them—but they’re stable, not growing out of control and not going anywhere. It needs a change of perception in the minds of the cancer research and medical communities to work towards realizing this dream of perhaps living with a stable cancer by treating it pro-actively, instead of the current reactive approach to the treatment of terminal cancer. That’s because I feel that it's purely Darwinian: the harder you select, the faster you evolve. And it's usually worse.