JAX is highlighting the achievements of women in health-science history, celebrating not only their contributions to science but also remembering their struggles navigating what was, for many of them, a non-traditional career. 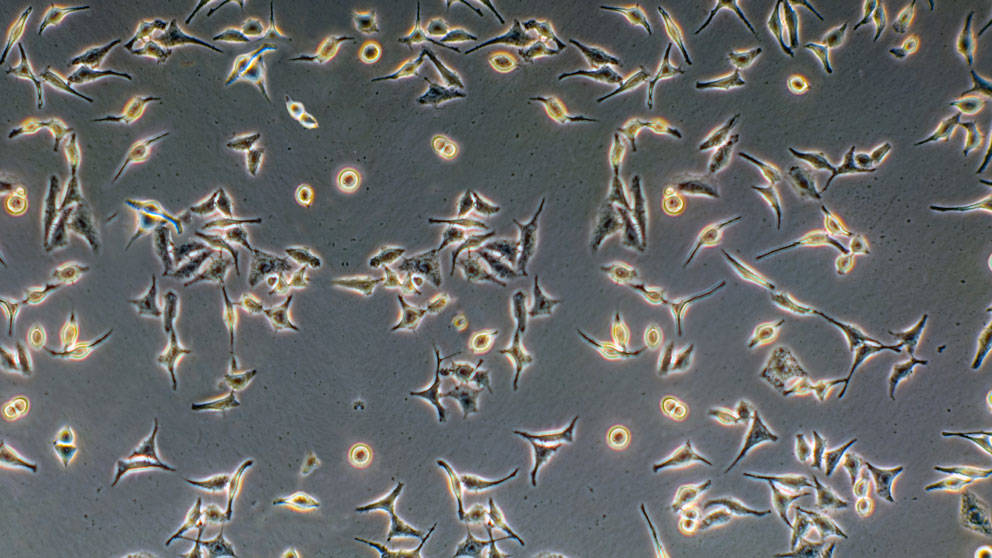 HeLa (cervical cancer) cells in culture. This line of human cancer cells is one of the most commonly used in biological research.

HeLa cells are human cells that became the first and most commonly used human cell line — cells that are live and reproduce in a test tube, that have been used in generating breakthroughs in cell biology, drug discovery, and the understanding of human disease.

I was an undergraduate research assistant when I first saw HeLa cells. It was when I saw the tube marked "HeLa" that the enormity and human aspect of the cells sunk in. The cells in this tube were from a woman, another human being. A woman who had been treated unfairly, to put it mildly.

HeLa cells have had major roles in treatments, cures, vaccinations and procedures.

Holding the tube with her cells, I stood in awe of how the cell line became so universal. How a women of just over five feet in stature had produced a cell line estimated to weigh 50 million metric tons — a mind-boggling amount of cells given that a cell weighs next to nothing. These cells are in just about every biological laboratory in the world. Scientists today jest that HeLa is the most reproductively successful organism, because the number of HeLa cells have far surpassed any other organism in the world and have become, in a sense, immortal.

But where did these cells come from? Whose DNA is responsible for some of the greatest advances in scientific history? For years people didn’t know from whom HeLa cells were taken. Eventually, after many incorrect assumptions regarding the name of the woman, it was discovered that her name was Henrietta Lacks; hence, "HeLa." More importantly, in her book, “The Immortal Life of Henrietta Lacks” — from which much of the information here is derived —  author Rebecca Skloot unveiled the family’s story.

Who is the woman behind the famous HeLa cells?

Henrietta Lacks was born Aug. 1, 1920 in Roanoke, Virginia and given the name Loretta Pleasant, which she later changed. A few short years after her own birth, her mother, Eliza Lacks Pleasant, died during the delivery of one of Henrietta’s siblings. Henrietta’s father, Johnny Pleasant, was not able to care for his 10 children and they were split up among the family in Clover, Virginia. There the family farmed tobacco fields that their ancestors worked as slaves. Henrietta got placed with her grandfather, Tommy Lacks, in a log cabin they called the “home-house”. This small log cabin was the former slave quarters of the plantation. It was here that she lived with her cousin David “Day” Lacks, who later became her husband. As children, the two would wake in the early hours of the morning to feed the animals, tend the garden and toil in the tobacco fields. Henrietta walked two miles to the designated black school until the sixth grade, when she had to drop out to support the family. On days when work was finished early, Henrietta and her cousins would go swimming in a creek, build fires and play on a rope swing.

Before marriage, Day and 14-year-old Henrietta had their first of five children, Lawrence, followed by Elsie (Lucile Elsie), David Jr. (Sonny), Deborah and Joseph (Zakariyya). Elsie had epilepsy, although at the time the term wasn’t widely used. Once Henrietta was pregnant with Joseph, she couldn’t take care of Elsie. Doctors said it was best to send Elsie to Crownsville State Hospital (formerly known as the Hospital for the Negro Insane). Henrietta’s cousins say a part of Henrietta died that day. She would visit Elsie once a week and was the last person to visit her before Elsie’s death at the age of 15.

The Henrietta Lacks HeLa story starts with a visit to Johns Hopkins, the only hospital in the area that would serve black and poor people. Henrietta had previously felt a “knot” inside her which doctors diagnosed as cervical cancer. She, like many other black women, could not afford to pay hospital bills. Doctors often took advantage of poor people’s situation by using them for research; in the doctor’s eyes it was compensation for not paying. It is vital to note, this research was conducted without informed consent; however, at this time in 1951 there were no laws pertaining to patient informed consent or ethical violations. Laws were later established in part because of Henrietta’s story.

Henrietta’s doctor cut a piece of her tumor and delivered it to Dr. George Otto Gay, the head researcher at Johns Hopkins for cell growth. Dr. Gay was attempting to grow immortal cells, malignant cells. His goal was to create an environment to allow human cells to survive indefinitely in culture. Until Henrietta's cells were available, researchers had not successfully grown human cells outside of the body. It was the uniqueness of Henrietta Lacks’ cells that allowed scientists to discover which methods of cell culture worked. Her cells were hardy — instead of dying in unfavorable conditions, the cells proliferated more slowly, giving scientists the opportunity to identify the most favorable methods. They then applied these findings to other cell lines, thus determining how to most effectively culture cells. Without this now seemingly basic method we would not have made many critical discoveries in biology. Countless routine medical tests and basic research would not be possible without culturing cells.

HeLa cells have had major roles in treatments, cures, vaccinations and procedures. Rebecca Skloot captures this best: “There is not a person out there that has not benefitted from HeLa cells.”

Here’s the short version of a long list of scientific advancements impacted by HeLa cells:

What was so special about these cancer cells that lead to the first immortal line? The answer is still unclear. Factors that most likely played a role are the aggressiveness of her cancer, her cancer cells having multiple copies of the HPV genome and Henrietta having syphilis, which suppressed her immune system, allowing for more proliferation.

After being diagnosed with cancer, Henrietta started receiving radiation to kill the cancer cells, which unfortunately killed many healthy cells as well. Several weeks into her treatment, she discovered she was infertile. Her doctors did not tell her that radiation would result in infertility. Her medical record reads, “Told she could not have any more children. Says if she had been told so before, she would not have gone through with treatment.” The radiation ultimately failed as her cancer metastasized throughout her body. Henrietta died at the age of 31 on October 4, 1951, only eight months after she first felt that “knot.”

Fast forward to the 1970s when scientists, in an effort to learn more about Henrietta's genetics, located her kids to draw blood samples. Doctors called Day, Henrietta’s widower, to ask him for permission. Day was distrustful of white doctors and was reluctant — a natural and understandable response in light of the Tuskegee Syphilis Experiment. Doctors failed to convey that the blood was for research, so the family thought they were being tested for disease and awaited news of results that never arrived. At one point, Day was terrified when he thought that Henrietta was still alive after hearing that her cells were reproducing in the laboratory. This miscommunication was due in part to the doctors not clearly explaining the purpose of the blood draw as well as Day having a fourth-grade reading level.

It would have been advantageous if a genetic counselor could have been present to help facilitate communication between the Lacks family and the doctors; however, the field was in its infancy.

Less than a year after I first held a tube of HeLa cells, I interviewed two descendants of Henrietta Lacks — Kimberly Lacks and Veronica Spencer, the granddaughter and great-granddaughter, respectively. It was surreal to talk to them about the ongoing effect their relative has had on our world.

Veronica highlighted a take-home message from her great-grandmother’s story — how essential self-assessment is in early detection of cancer.

Although Dr. Gay did not personally make monetary gains from HeLa cells, others have. Many have argued the Lacks family has not been appropriately compensated for the tremendous advances in science made possible by HeLa cells. In 2013, the NIH added two family members to a six-member committee that regulates access to the genome. The NIH also promised to acknowledge the family in research papers.

Last summer, HBO brought Rebecca Skloot’s book to the screen. The film starred Rose Byrne as Skloot and Oprah Winfrey as Deborah Lacks (Henrietta’s daughter). Skloot worked closely with Deborah to uncover the story of Henrietta. Deborah, who died in 2009, was committed to learning about her mother’s life and sharing this experience with the world. Skloot fondly comments that Deborah always wanted Orpah to play her and for the whole family to be involved with Henrietta’s story, both of which have come true. Henrietta’s story will continue to be told and people will remember—HeLa cells were from a woman named Henrietta Lacks..

Kira Dineen is the Communication Lead of My Gene Counsel, a digital health company that links current, updating, evidence-based information to patient’s genetic test results. My Gene Counsel is the source of accurate, unbiased genetic health information written in language that patients and physicians can understand and use. Kira hosts and produces the genetics radio show/podcast, DNA Today, which has been nominated in the 2015 and 2016 Podcast Awards. She is finishing her Diagnostic Genetic Bachelor’s of Science degree with a concentration in Cytogenetics at the University of Connecticut. Follow her on Twitter @DNApodcast and @KiraDineen. 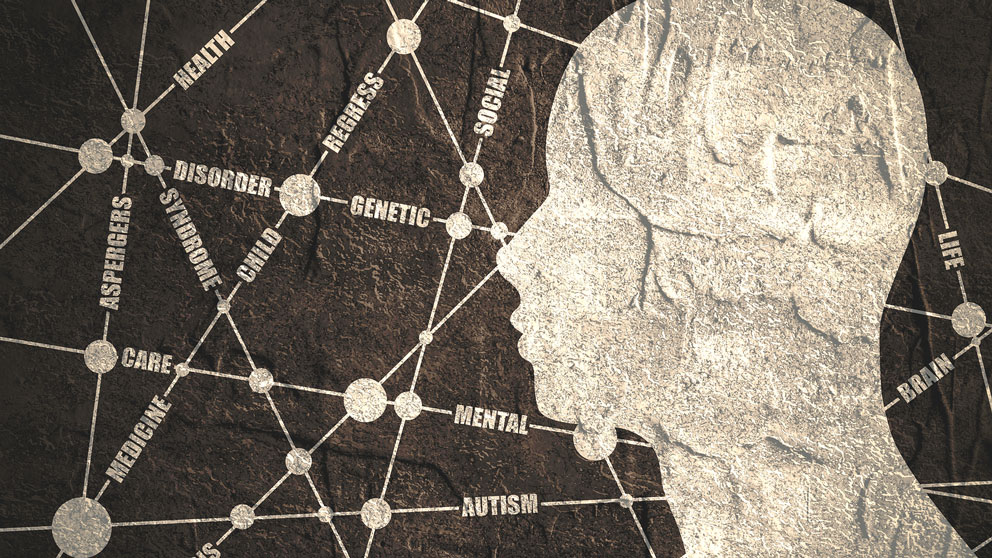 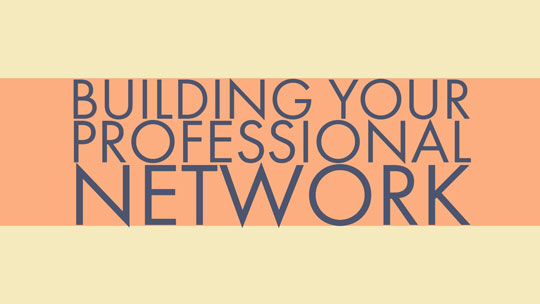 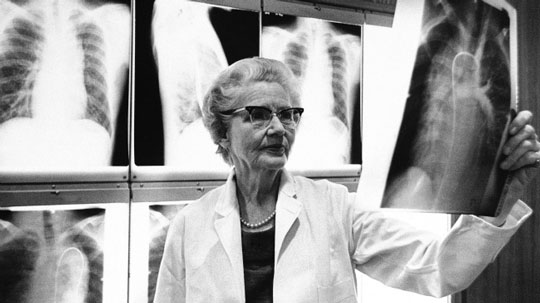