It takes a crowd — cancer research and AACR 2016

I don’t do very well with big crowds. At least not at first. And when I entered the conference center for the American Association for Cancer Research (AACR) meeting last week in New Orleans, I had an uncomfortable flashback.

My first big running race was the Chicago Marathon in 2002. (Hang with me here, I’ll get back to cancer research in a minute.) A traveling companion was, shall we say, casual about showing up on time, so we got to the starting line later than I would have preferred. Now I’d heard about how big the field was (more than 30,000 runners), but until I got there and tried to do something — get to the bag drop half a mile away — it was just a number. In fact, 30,000-plus people is an insane number to pack into a small space.

Suffice it to say we never got to stow our bags (and lost them and their contents), I lined up way behind my projected pace area, and it stressed the heck out of me. I was hemmed in, slowed down and didn’t see open road or run my hoped-for pace for miles.

AACR isn’t quite that big, but 20,000 people inside a building — even a huge building — is still overwhelming. I had that familiar feeling of mild panic as I was crowded in and buffeted about trying to get to the opening plenary talks with thousands of others. But I made it through, and as at the marathon, where I ended up running the second half as fast as my first and finishing in my best time, the crowds at AACR became more exhilarating than overwhelming before I was done.

So far clinical genomics has most benefited patients with rare diseases and cancer, and it was heartening to see that cancer genomics is pretty much old news to the AACR crowd. I wish I had attended around 2010 so I could compare and contrast, because I’m sure the difference is striking. Simply put, genomics is now seen as the tool through which one can understand cancer in the detail necessary to guide treatment. There were many talks that addressed the challenges remaining — the high cost of tailored therapies, how to navigate regulation/therapy approval with small patient Ns, parsing out structural variants versus sequence mutations, distinguishing between driver and non-driver mutations, etc., but I heard nobody questioning the value of tumor sequencing.

To no one’s surprise, immunotherapies dominated the discussion this year, drawing at least a mention in almost every session I attended. Checkpoint blockade therapies, which block the body’s natural inhibitors of immune response (important to avoid immune toxicity and autoimmunity), have seen great progress. The clinical trials I heard about seem to be focusing mostly on PD-1/PD-L1 (programmed cell death protein 1 and its ligand, or binding partner) blockade, usually in combination with other specific therapies. The excitement around this area is palpable, and there were several statements that cancer treatment as we know it will soon be largely replaced by immunotherapies that are more precise, more effective and have fewer side effects.

But we’re not there yet, and getting there won’t be a smooth process. One session I attended focused on the regulation of biomarker and genetic tests developed to guide cancer treatment. It was good to see both groups in the same session, but the difference in tone of the regulators (limitations) versus the test developers (possibilities) was striking. The path from research to clinical delivery is long and arduous, as was illustrated by a researcher who presented his work into using a genetic test from cells gathered in the upper airway to assess whether a lesion found in someone’s lung needs to be biopsied. With CT screening becoming more prevalent, many more such lesions are being found, but most are benign. Finding out which should be biopsied — an invasive, uncomfortable and somewhat hazardous procedure — and which can be left alone and monitored visually is of huge patient benefit. Developing ways to accelerate the safe delivery of such valuable tests to patients is of great importance, and the current regulatory infrastructure remains a formidable obstacle to progress. 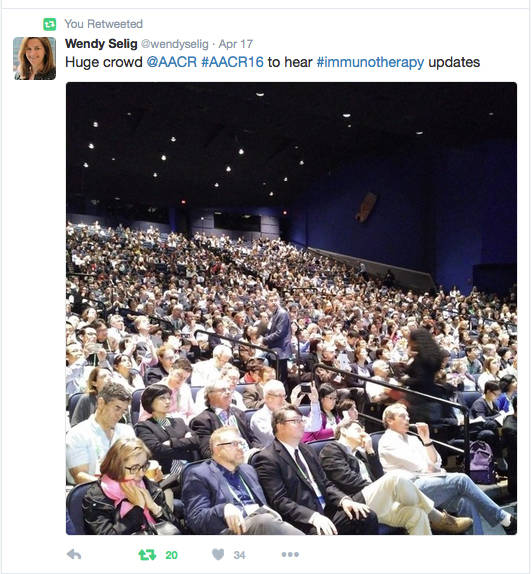 A challenge of a big meeting like AACR is that many interesting talks occur simultaneously, so my choices of other sessions ended up being eclectic. I attended a packed-house immunotherapy session, a panel talking about the effects of the ACA on cancer care delivery, a basic science mini symposium about chromosome rearrangements in cancer, and a session on the use of CRISPR to identify drug targets, among others. Two of my favorite groups of talks were a little farther off the usual beaten path, however. First, I went to the AACR’s first-ever major symposium on precision exercise regimens in cancer treatment. The take home was that there is a lot of anecdotal evidence that exercise helps cancer patients but not nearly enough solid studies/data yet on how it works, although some interesting studies are underway. And my last session of the meeting had talks from early career researchers who are developing innovative tools—“cool tools” according to the session title — for cancer research and therapy. The most intriguing to me were the tiny, implantable vessels that deliver micro-doses of many drug simultaneously within the same tumor. That’s definitely cool, but what is far cooler is that they can now be outfitted with optic fibers for in situ monitoring of drug effect. That sort of thing won’t make developing new drugs any easier, but it sure will make testing candidate drugs more efficient and accurate.

All in all, seeing and hearing thousands of brilliant minds in one place, all working hard to understand and hinder cancer, is a little sobering. We’ve come a long way, but it’s a testament to cancer’s adaptability and toughness that we still have so far to go. Nonetheless, our approach to cancer is at a positive crossroads in 2016. The ongoing transition between generalized “sledgehammer” therapies and precise, “personalized” therapies is well documented. So are the challenges inherent in translating the science to the clinic with full safety, efficacy and comparative effectiveness data in tow. But there is also real hope and formidable resources being brought to bear — see Joe Biden’s speech to close out the conference and the cancer “moonshot” — in a time of unprecedented capability. Just as I wish I went to AACR in 2010, I’m curious to see what I might write in 2022 and optimistic that it will differ considerably (in positive ways) from my words today.