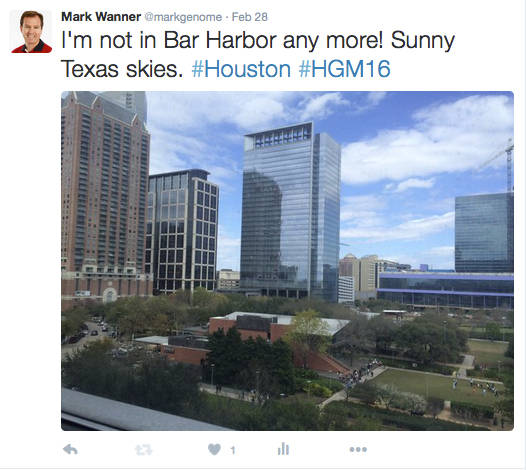 I began following human genomics research closely a little over six years ago. It’s easy to forget now, but at that time whole genome sequencing was still extremely expensive and rare.

Indeed, it was big news in March 2010 when actress Glenn Close became the first woman to publicly announce that her genome had been sequenced. It was a heady time, and I was swept up in the novelty and wonder of it. I knew that genomics was going to be a challenging field, but like many others I was blissfully unaware of what a complicated mess an individual human genome — even in healthy humans — usually is.

Fast forward 75 months or so, and I’m in Houston for the annual meeting of the Human Genome Organisation (HUGO). Those months have been filled with hype, disappointment, startling discoveries of many kinds, continued technological progress, thousands upon thousands of sequenced human genomes and exomes, inspirational stories, cautionary tales, and much more. Genome sequences are not the crystal balls into patients’ health and wellness that early post-Human Genome Project marketing implied they would be, but the data and understanding gained from them have increased quickly all the same. Sequences are becoming useful, not just as knowledge for knowledge’s sake, but for clinical progress as well. This shift, which has seemed painfully slow but has actually occurred relatively quickly (75 months!) was reflected in the meeting’s theme: Translational genomics.

And what a meeting it was, with leaders in the field touching upon a high percentage of the important current themes in translational genomics and precision medicine. Cancer genomics, exome sequencing for rare disease diagnosis, data management and sharing challenges, ELSI discussions, cognitive computing, clarifying impact of rare variants of uncertain significance, microbiomics—you name it, there was at least one talk about it. The take-home message from the collection of talks was more substantive than I’ve received previously: essentially, that precision medicine based on translational genomics is still tremendously difficult, but progress is tangible. The work done by those in Houston and others in the field will shape and change medicine profoundly in the years to come.

I was already familiar with a lot of the excellent work presented, having interviewed several HUGO council members in years gone by (Mark McCarthy, Oxford University, type 2 diabetes; Aravinda Chakravarti, Johns Hopkins, modes of inheritance; Stylianos Antonarakis, University of Geneva, outgoing HUGO president) or having seen them speak before (Elaine Mardis, Washington University of St. Louis, cancer sequencing data; Heidi Rehm, clinical genomics implementation; Michael Snyder, Stanford University, functional genomics and proteomics). It was good to hear updates from those familiar quarters, but compelling speakers filled the entire agenda. Several stood out, however, providing (in my opinion at least) excellent insight into important parts of the translational genomics field. I could go on and on, but I’ll highlight just a few here.

Mary Relling of St. Jude Children’s Research Hospital spoke about her work in pharmacogenetics, a field of huge promise that has progressed slower than expected. Wide adoption of pharmacogenetic testing has been stymied by the current healthcare system and physician resistance in addition to the complex variability of individual patient response to medications. St. Jude has implemented a pre-emptive testing program for all patients, with clinical decision support. It will be very interesting to follow this effort. Han Brunner gave a rapid-fire talk on his work with exome sequencing to identify the causative variants in patients with severe intellectual disability. Brunner acknowledged that the occasional misdiagnosis or misinterpretation of a variant teaches diagnostic “humility,” but exome sequencing still yields more correct diagnoses for a lower cost than previous methods in his patient population. Joseph Petrosino of the nearby Baylor College of Medicine talked about translational microbiome research, an area of much promise but also attracting much unfortunate hype these days. With proper caveats, Petrosino presented an overview of his work with TEDDY, a huge and interesting data collection and analysis effort into type 1 diabetes biomarkers. His group is also developing impressive microfluidic methods to separate bacterial cells and sub populations, making it possible to isolate rare bacterial species and separate microbes from human cells. Finally, I enjoyed the opportunity to tour the Baylor Human Genome Sequencing Center, a leader in sequencing tech, volume and clinical impact since the early days of genomics. On the less geeky side, it also has outstanding views of the Houston skyline and the rest of the massive Texas Medical Center campus.

At the conclusion of the meeting, Charles Lee from The Jackson Laboratory for Genomic Medicine was named HUGO president-elect, and he will succeed Stylianos Antonarakis next February. He takes over an international organization that one could say was a little ahead of its time when founded 28 years ago. This is definitely HUGO’s time now, however. I for one cannot wait to see what the 2017 meeting, to be held in Barcelona, Spain, will bring.