Studying human gene function in mouse models is at the heart of genetics research, and nowhere is this more evident than at The Jackson Laboratory (JAX). A recently published protocol and overview of CRISPR/Cas9 gene editing1, written by JAX Assistant Professor Adam Williams, Ph.D., and colleagues, highlights how revolutionary this new technology has been for the field of mouse genetics. 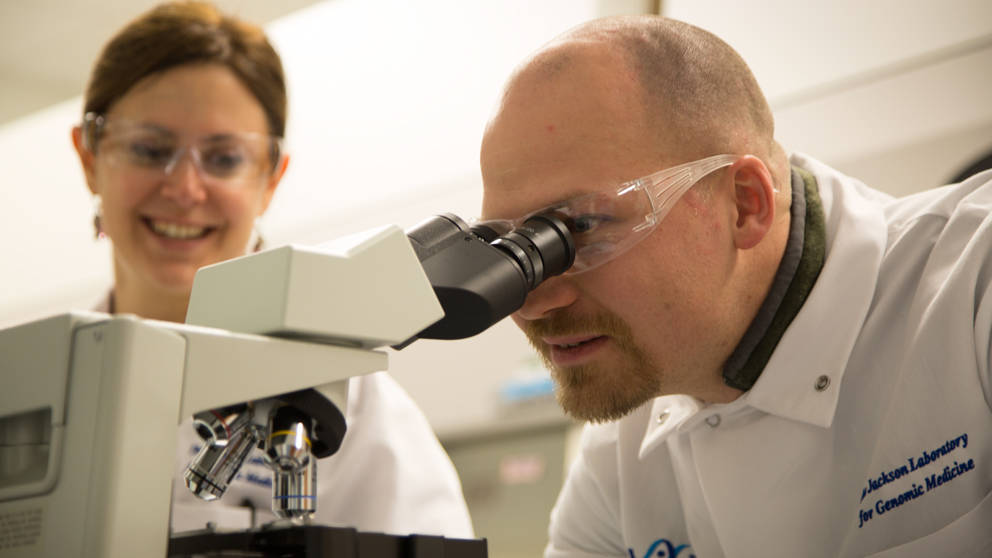 Nearly thirty years ago, the first targeted knockout mouse was published, heralding a new age of genetic research. The time and resources invested to make these mice were costly; it often took years to establish mice knockout lines. The process was slowed due to several time-consuming and expensive steps, including the culture and expansion of mouse ES cells and the production of chimeric mice. In addition, the process was not always reliable, and it often took several rounds to generate mice capable of transmitting the knockout allele to their offspring. Nevertheless, this groundbreaking technology allowed scientists to study endogenous gene function in vivo, and it drove the field forward into the modern age of genetics research.

There have been severable marked improvements upon the original technique, as Williams and colleagues note within their introduction. Zinc-finger nucleases (ZFNs) and transcription activator-like effector nucleases (TALENS) came forward in 19912,3 and 20094,5 respectively, and introduced novel methods of gene targeting. Both approaches allow scientists to bypass ES cell culture and introduce the editing machinery directly into one-cell mouse embryos. For this reason alone, ZFNs and TALENs provided an accelerated pathway for producing targeted gene knockouts in mice. However, both of these methods had some caveats. Off-target effects were a common problem with ZFNs, and both TALENs and ZFNs were difficult to design and expensive to produce in the lab.

In 2013, a major breakthrough was achieved in gene editing and mouse knockout models. Scientists discovered how to harness the CRISPR-associated protein 9, or Cas9, nuclease for gene editing in mammalian cells6-10. The CRISPR/Cas9 system acts as an adaptive immune system for certain species of bacteria. When these bacteria confront a new pathogen, they save pieces of the intruder’s genome, and incorporate this DNA into a CRISPR locus. The locus produces a guide RNA (gRNA) from the CRISPR locus, which recognizes the pathogen if it re-infects the cell. The gRNA can be used to localize, or guide, the Cas9 nuclease to complementary DNA in the invading pathogen, and degrade its DNA, thereby eliminating the infection. Scientists cleverly co-opted this technology by injecting Cas9 nuclease and locus specific-gRNA plasmids into one-cell mouse embryos. The gRNA localizes the Cas9 nuclease to its target with high efficiency, creating double-stranded breaks at the specified sites within the genome. Although the DNA is repaired, this process is typically error-prone following double-stranded breaks, and the result is an insertion/deletion mutation at the target site.

The CRISPR/Cas9 system is inexpensive and relatively easy to design and construct in the lab, making it a standout among the options for creating genetic deletions. In addition, multiple modifications on the original technology have been developed, allowing scientists to insert new DNA, create point mutations, or modify the epigenetic modifications of a given locus. It has also significantly decreased the time required to make targeted mutant mice; as Dr. Williams notes in his own protocol, it can take as little as one month to create a knockout mouse using the CRISPR/Cas9 system. What used to take scientists years to complete now can be accomplished in as little as one month! And we are only at the beginning of this rapidly evolving technology.