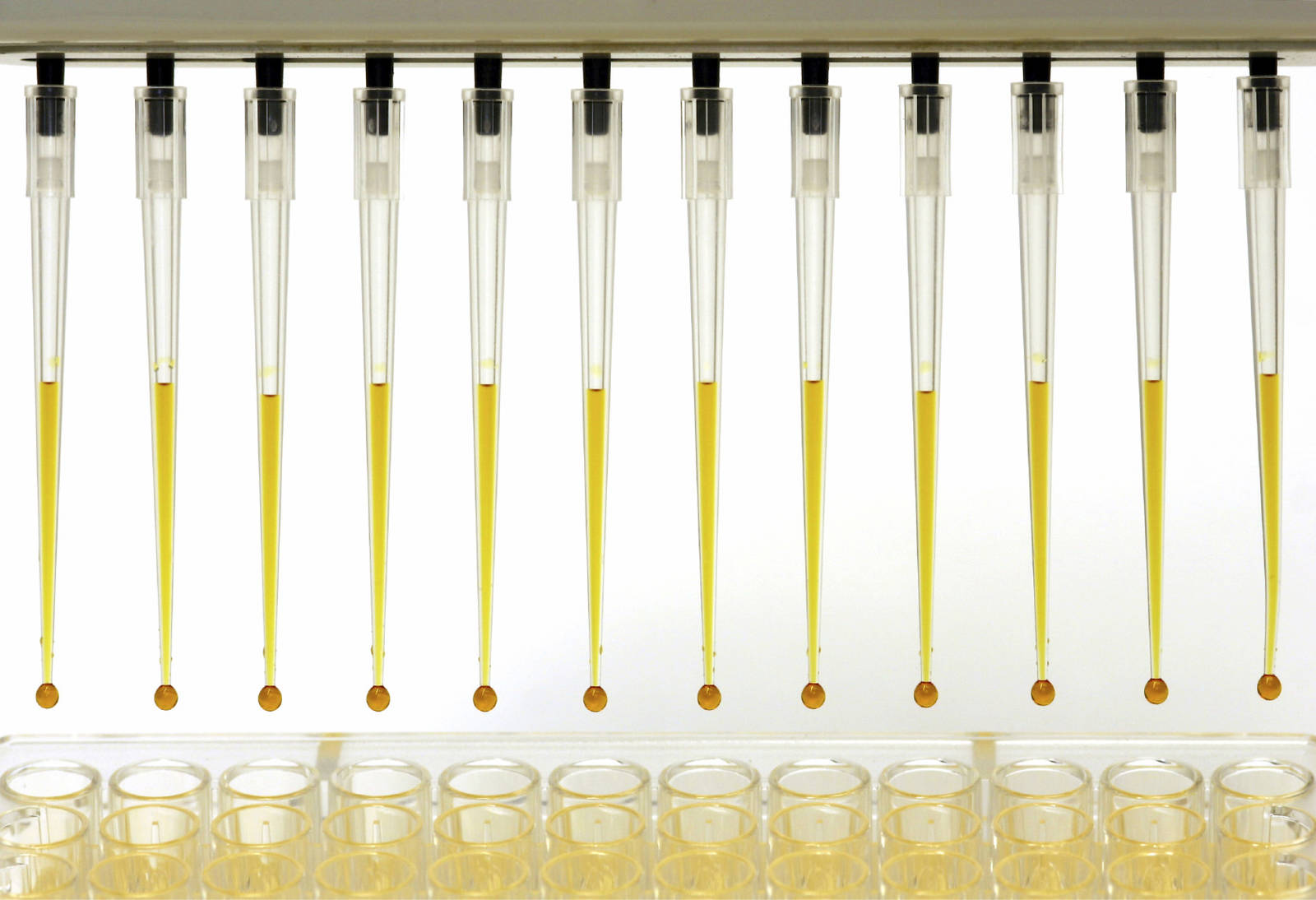 The intention of this article is to serve as a genotyping “primer” to familiarize you with the newer techniques that JAX uses to genotype mice in our repository, and to decode some of the sometimes puzzling terminology in our updated genotyping protocols. The JAX Technical Information Services (TIS) group answers between 130 and 200 questions  about genotyping per month for investigators who are either looking for a protocol, troubleshooting an assay, or are simply not understanding how a particular assay works. Oftentimes, much of their confusion arises from the fact that real-time PCR and other more sophisticated methods are replacing many standard agarose gel electrophoresis assays for genotyping JAX Mice.

Why change protocols that work?

Due to the large size of our live mouse Repository, JAX genotypes thousands of mice every week, so in an effort to streamline this process and to take advantage of newer genotyping strategies, we have developed many assays that allow for more high-throughput screening. As a result, many assays appear to contain extra primers, fluorescent tags, and unusually short cycling steps that are unfamiliar to many researchers who still run their PCR assays on conventional agarose gels.  To clear up some of the confusion, I’ll describe the methods we use to replace the standard PCR/gel electrophoresis assays.

One of the first alternative methods that we implemented to genotype JAX mice was the High Resolution Melt Curve (HRM) assay.   HRM analysis can discriminate DNA sequences based on their composition, length, GC content, or strand complementarity. In HRM, mutant and internal positive control products are still amplified by PCR, but following amplification, the products are not run on an agarose gel.  Instead, they are heated up in the presence of a fluorescent double-stranded DNA intercalating dye, such as EvaGreen®, in a Roche Lightcycler, or similar real-time PCR machine.  Each product dissociates – or “melts” - at a characteristic temperature.  Melting releases the intercalating dye, producing a decrease in fluorescence.  The change in fluorescence is then plotted against temperature (dF/dT), as shown in figure 1.

Figure 1. High Resolution Derivative Melt Curve plot allows visualizing the genotypes of wt, heterozygous and homozygous mutant samples. The negative change in fluorescence is plotted versus temperature (-dF/dT).  Each trace represents a sample.  The melting temperature of the wild-type allele in this example is ~ 85.5⁰C (first peak), the melting temperature of the mutant product (second peak) is ~ 91⁰C.  The green traces represent pseudo-heterozygotes (homozygous DNA diluted 1:1 with wt DNA), and blue traces are no-template controls.

HRM assays are great for distinguishing genotypes for targeted mutations, or showing the presence or absence of a transgene in transgenic mice, but they are not quantitative, and cannot distinguish hemizygous transgenic mice from homozygotes.  For that, you need to do real-time PCR (rtPCR), otherwise known as quantitative PCR (qPCR).

Quantitative PCR is one of the several assays that incorporate fluorescently-labeled DNA primers called probes.  Instead of just 4 primers in a multiplexed assay – a forward and a reverse primer for each product – qPCR assays include an additional transgene-specific probe and a probe for a mouse housekeeping gene. These probes carry fluorescent tags at their 5’ and a “quencher” moiety at their 3’ ends so there will be no fluorescence unless the 5’ tag and 3’ quencher are physical separated.  If the transgene target is present, the transgene-specific probe will bind, and during amplification the tag will be separated from the quencher, resulting in a fluorescent signal.  Each probe primer carries a different fluorescent tag so the transgene and the wild-type reference products can be differentially followed.

In qPCR, the amount of fluorescence from both the transgene and reference products is measured at each cycle until they can be detected above background. This cycle is called the cycle threshold (CT).  To normalize the amount of transgene product in a given sample, the CT value for the reference product is subtracted from that of the transgene product, producing the “deltaCT” (dCT; i.e. dCT = CTTg - CTref).
Because homozygous transgenic mice have 2X the transgene dosage as a hemizygote, their CT should be one cycle earlier, and their normalized dCT value should -1.0 relative to a hemizygote (see figure 2 below).    Incidentally, because non-carriers from a transgenic colony don’t carry any transgenic product to amplify, their dCT values are very large negative numbers. 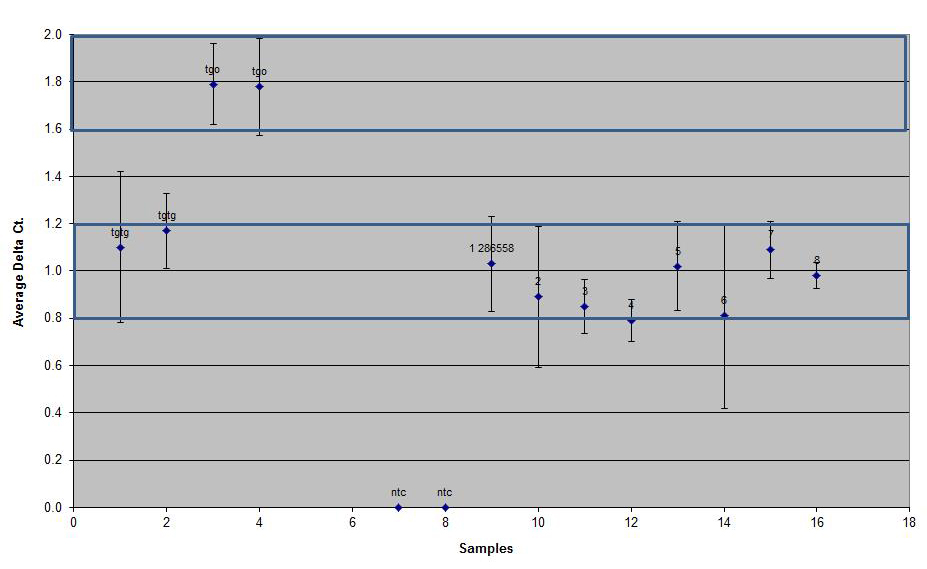 Transgene load (related to transgene copy number), also is monitored using qPCR in high transgene copy number strains like B6SJL-Tg(SOD1*G93A)1Gur/J (002726), a mouse model for Amyotrophic Lateral Sclerosis (ALS). The transgene load can influence the onset and severity of the neurodegenerative phenotype, so monitoring transgene load is essential to minimize phenotypic variability. Please note, however, that the sensitivity of qPCR is such that spontaneous changes that delete less than 1/3rd of the transgene copies may not be detectable using this technique. For a nice review discussion of the limits to the sensitivity of qPCR, see Liu et al. 2003. BioTechniques 35: 1170-4.

We have also developed a second type of assays that include fluorescently-labelled probe primers, classified as “Probe” or Endpoint Analysis assays. Here, the setup and the equipment is the same as for qPCR – that is, 4 primers and 2 probes specific for each allele are used in a multiplexed mutant and wild-type allele assay. However, instead of monitoring fluorescence levels at every cycle, fluorescence simply is measured at the end of the PCR cycles. For each sample the fluorescence intensity of the wild-type-specific fluorescent tag is plotted against that of the mutant tag. Homozygous mutants and homozygous wild-type clustered along their respective axes, whereas heterozygotes cluster along the diagonal (see figure 3). 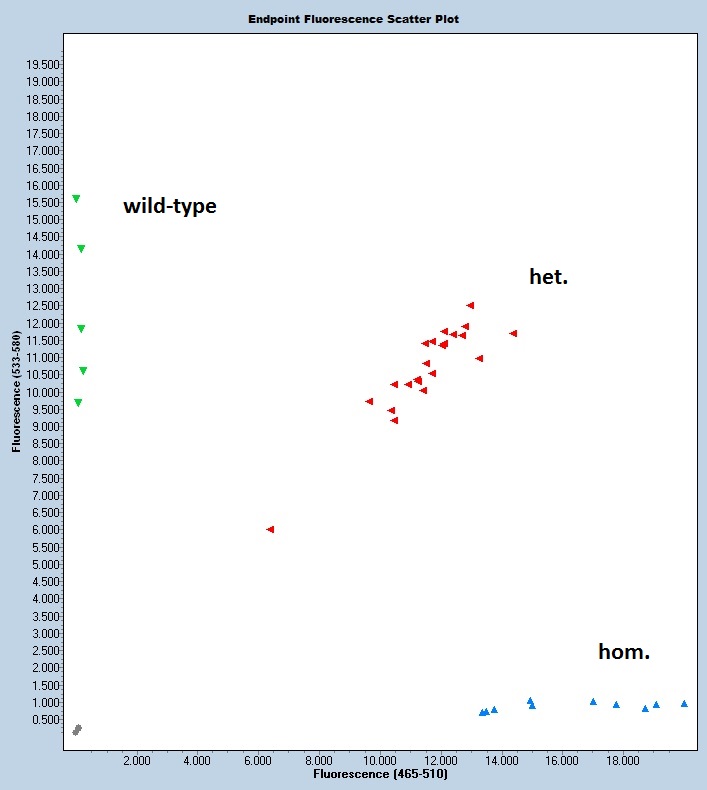 Probe/endpoint analysis assays are frequently used to genotype targeted mutations, but also are a powerful method for genotyping mice that carry spontaneous point mutations or small deletions, when mutant and wild-type PCR products cannot be resolved easily on an agarose gel.  Such assays are an improvement over older, restriction enzyme-based assays for spontaneous mutations that required digesting the PCR products prior to running a gel in order to distinguish wild-type from mutant alleles.

What in the world is "Touchdown PCR"?

As many investigators who routinely genotype mice can tell you, some PCR assays work better than others – in one assay, the mutant and wild-type products may not amplify with the same efficiency (try running the mutant and wild-type reactions separately!), whereas in others non-specific, contaminating products may introduce scoring difficulties.  To try to minizime the incidence of the latter, we have incorporated “touchdown” cycling conditions into many of our assays.

A final word on the KAPA 2G Fast polymerase

All DNA polymerases synthesize DNA at different rates, with most rates between 1 minute/kb. KAPA 2G Fast, however, boasts an extension rate of1-15 sec/kb, enabling much more rapid amplication of templates than many other polymerases (hence the 10 second extension time for many of our protocols). If you decide to use a different polymerase, you may need to increase the extension time to 30 seconds or greater, to allow template amplification to complete.

If you lack the equipment to perform either HRM or Probe/Endpoint Analysis assays in your laboratory, don’t fret:  both assays can be run in combination with conventional agarose gel.  To do so, simply drop their respective fluorescent dyes or fluorescently-tagged primers from the reactions.  Indeed, for each HRM and Probe/Endpoint Analysis TGS designs, they always validate the PCR products integrities at least once by running them on an agarose gel.

You shouldn’t have to make a major investment to run genotyping assays “the JAX way”, but keep in mind that any of our assays, regardless of  their type, may need to be re-optimized for your DNA isolation protocols, PCR conditions and equipment.  Now that you’ve completed this “primer” on genotyping, interpreting JAX genotyping assays will hopefully be a little easier. If you still have questions or need additional help, our Technical Information Scientists are available to offer their advice.