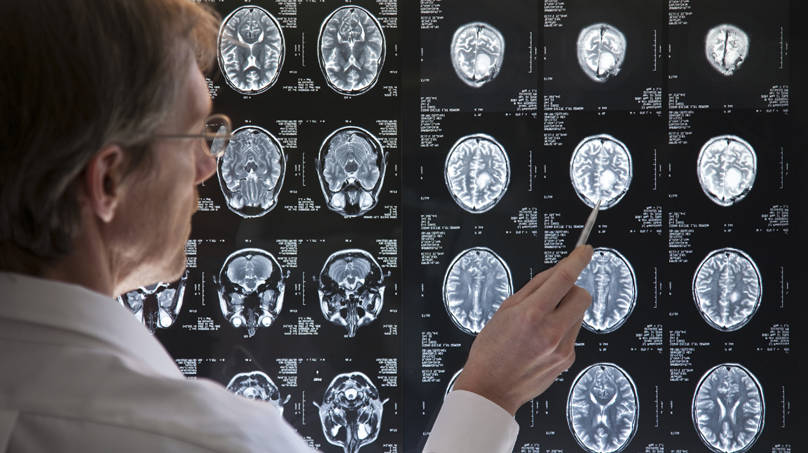 The prevalence of violence in our society has motivated biomedical researchers, sociologists and psychologists to look for genetic markers, predictors and causes for this destructive human behavior. Advances in neurochemistry and imaging technology have shown that many emotional and control disorders such as violence, suicide, depression and anxiety, involve disruptions in the brain’s normal activity due to altered gene expression, chemical imbalances, and environmental factors.

In developed countries, the majority of all violent crime is committed by a small group of antisocial repeat offenders. But until recently, no genes had been shown to contribute to severe or recidivistic violent behaviors such as homicide. According to a meta-analysis on data from 24 genetically informative studies, up to 50% of the total variance in aggressive behavior is explained by genetic influences.

Both our genotype and the environmental factors to which we are exposed to throughout life contribute to shaping our brain functions. Changes in the expression of specific genes in the brain -such as MAOA, DAT1 and DRS2- can affect neurotransmitter levels, which, in turn, influences complex functions such as intelligence, mood and memory. Environmental influences including stress, substance abuse, diet, sleep quality and social relationships also affect the brain.

Monoamine oxidase A (MAO-A) is an enzyme that normally functions in neuronal mitochondria by breaking down several key neurotransmitters: serotonin, dopamine and norepinephrine which are important in aggression, emotion and cognition (Figure 1). The MAOA gene –located in the X chromosome- is also known as the warrior gene, since abnormal versions of the gene often result in aggressive behaviors.

Several animal models in which the function of MAO-A is defective display excessive levels of serotonin, dopamine, and norepinephrine (noradrenaline) in the brain. Additionally, MAO-A mutant mice have increased reactivity to stress and increased aggression to intruder mice compared to normal mice. Humans carry different variants of the MAOA gene that result in different levels of gene expression. “Normal” individuals carry MAO variants that express high levels of neuronal MAO-A, a small subset of patients carry MAO variants that result in the absence of functional MAO-A, while other people carry variants that result in low levels of MAO-A expression in the brain.

In the early 1990s, researchers linked low levels of MAO-A with increased frequencies of antisocial behavior, specifically when individuals had a history of being mistreated during childhood. Later studies by Guo and colleagues (2008) investigated MAOA variants in 2500 American boys in grades 7 to 12, and demonstrated a genetic basis for severe aggressive behavior seen at school. A specific variant of the MAOA gene (VNTR 2R MAOA) was a risk factor of violent delinquency, but only when the boys suffered some other stress, such as family issues, low popularity and failing school.

These and other studies suggest that when subjected to an abusive childhood, individuals with low -MAO-A expression has are at an increased risk of developing Anti-Social Personality Disorder. This may yield to a long-term pattern of manipulating, exploiting, or violating the rights of others, and may commit violent criminal acts.

Many other studies on genetic variants and aggression have focused on the role of dopamine and its receptors and transport sites. The dopamine transporter (DAT1), which is encoded by the SLC6A3 gene, mediates the active reuptake and inactivation of dopamine from the synapse and is a principal regulator of dopaminergic neurotransmission. In homozygous DAT1-null mice, dopamine persisted at least 100 times longer in the extracellular space, providing a biochemical explanation of the hyperlocomotion (hyperdopaminergic phenotype) demonstrating the critical role of DAT1 in regulating neurotransmission.

Guo and collaborators analyzed a set of children (2500, seventh through twelfth graders) looking for additional genetic markers of aggression and demonstrated that a specific variant of the dopamine transporter 1 (DAT1) gene – the DAT1*10R genotype- contributed to serious delinquent behavior, compared to subjects homozygous for the DAT1*9R/9R allele. DAT1 normally limits the level and duration of dopamine receptor activation, thus controlling synaptic dopamine levels.

The D2 dopamine receptor is a G protein-coupled receptor is located on postsynaptic dopaminergic neurons and is centrally involved in reward-mediating mesocorticolimbic pathways. This receptor is coded by the DRD2 gene, that is involved in governs physiologic functions related to locomotion, hormone production, and drug abuse. Guo and colleagues also found that a DRD2 variant was a risk factor of violent delinquency, but only when adolescents and young adults suffered some other stress, such as family issues, low popularity and failing school.

Aggressive behavior in humans has also been linked with other genes, including variants of the androgen receptor gene (AR) and the catechol-O-methyltransferase (COMPT) gene –also responsible of breaking down dopamine.

What are genes from extremely violent criminals telling us?

Interestingly, this line of thinking is supported by a study published this summer in Molecular Psychiatry: Genetic Background of Extreme Violent Behavior. The analysis of almost 900 Finnish criminals found that at least 5-10% of them -who had committed at least 10 homicides or repeatedly attempted homicides, or batteries- in fact carried a MAOA low-activity genotype.

They also found identified another genetic marker associated with extremely violent behavior: Cadherin 13 gene variant (CDH13) a gene that encodes neuronal membrane adhesion protein. This gene was previously associated with substance abuse and ADHD. According to the Finnish authors, MAOA deficiency could result in "dopamine hyperactivity" especially when an individual drinks alcohol or takes drugs such as amphetamines. Experts caution that although these genetic markers were not found in non-violent offenders, it probably is unrealistic to think that a couple of genes by themselves could code for violence or crime.

What really happens in firearm-permissive environments?

Although mass killings get the most press, by far, the main cause of firearm deaths in the USA is suicide, and not due to combat fatalities or homicides. According to statistics from the CDC and The Epidemiology of Firearm Violence in the Twenty-First Century United States (2015), from 2002-2013 suicide in the U.S. was far more common than the combination of homicides, combat-related casualties and accidents. 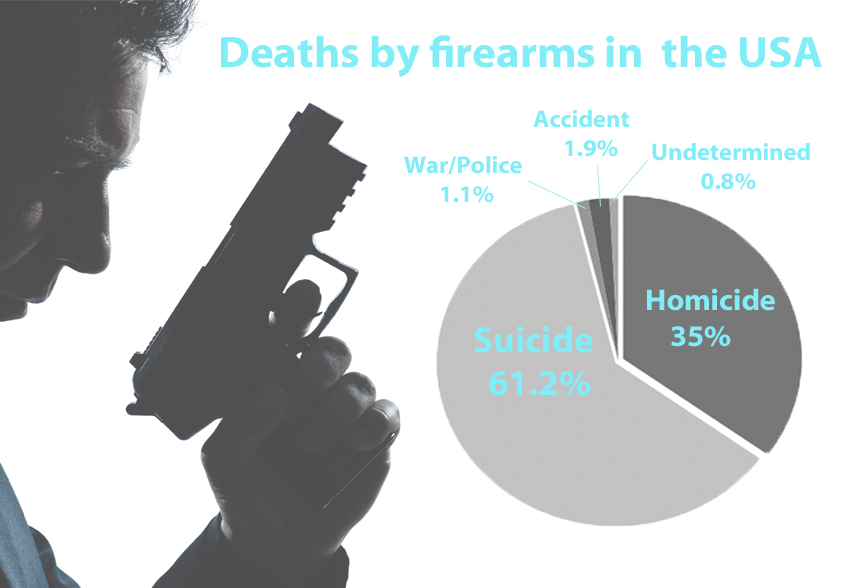 The media’s bias toward covering homicides far more than suicides is due in part to the sensational nature of murders including mass shootings. According to data provided by the Centers for Disease Control and Prevention (CDC) and a 2015 review by gun violence expert Dr. Garen Wintemute, the epidemiology of firearm violence has had a mortality rate that remained unchanged for more than a decade, making this issue a huge and costly public health problem in the United States.

Based on a large number of twin and sibling studies that span almost four decades, the genetic contribution to delinquency is thought to be approximately 50%. The current model is that environmental influences account for the other 50% of cases of violent behavior and delinquency. Lately, biosocial research has made big strides deciphering the influences of age and gender and is beginning to gain insight on why some individuals but not others become extremely aggressive in the presence of different levels of social risk. There is great hope that advances in behavioral genetic research will point not only to additional genes that maybe contributing to violent behaviors, but also to novel therapies to better address antisocial behavior.