Why is it that the same genetic mutation sometimes produces different disease phenotypes? We see this in a long list of inherited human diseases and in mouse models with specific mutations.

In many cases, both a mutation’s phenotypic penetrance and expressivity vary due to the different combinations of modifying alleles that are present in one genetic background versus another.  As an example, let’s look at the impact of genetic background on the progressive neurodegenerative disease in popular mouse models of amyotrophic lateral sclerosis (ALS).

Classic mouse models of familial ALS are transgenic mice that overexpress a mutant form of human superoxide dismutase 1 (Tg(SOD1*G93A)1Gur; aka SOD1*G93A). Transgenic, hemizygote carriers manifest phenotypes that resemble ALS in humans: they become paralyzed in one or more limbs due to loss of motor neurons from the spinal cord. The genetic background of the original SOD1*G93A transgenic mice (002726) were on a non-uniform mixture of SJL/J and C57BL/6J. The transfer of this transgene on to different backgrounds has produced congenic strains with either early or late onset of symptoms: 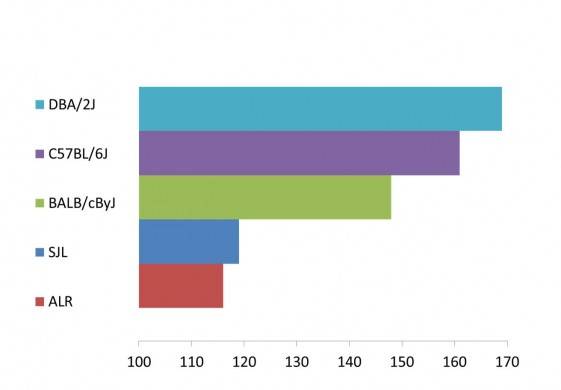 Similarly, hemizygous SOD1*G93A transgenic carriers on the mixed B6SJL background also have a decreased lifespan compared to hemizygotes on the congenic C57BL/6J background: 50% survive to 128.9 (±9.1 days) versus 157.1 (±9.3 days), respectively.

Mice with the G93A-SOD1 transgene on the mixed B6SJL background show abnormalities that are not evident on the B6 background. Some of these phenotypes are anomalous mitochondria morphology and cellular physiology, slow postnatal weight gain and atypical capillary morphology.

Table 1. Summary of the phenotypes observed in SOD1*G93A transgenic mice on the C57BL/6J (B6) congenic and B6SJL mixed background. 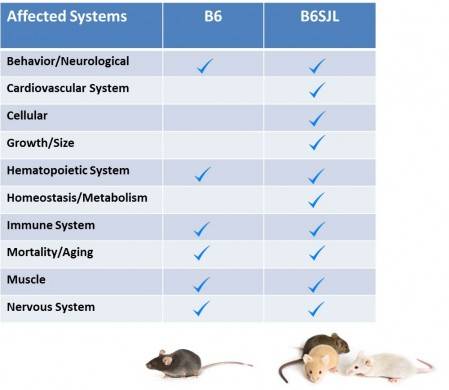 The Jackson Laboratory has excellent manuals and field guides to assist you if you are working with mouse models of ALS, Huntington’s disease, and spinal muscular atrophy, where these and other issues are comprehensively addressed.

Whether you are working with models of ALS or other inherited diseases, be aware that genetic background-dependent variation in genetic modifiers may impact the phenotypes of your mice and your experimental results.  If you are breeding and maintaining research colonies in your facility, it is particularly important that you avoid breeding errors that might compromise your strains’ genetic backgrounds in order to minimize experimental variability and to ensure the reproducibility of your conclusions.