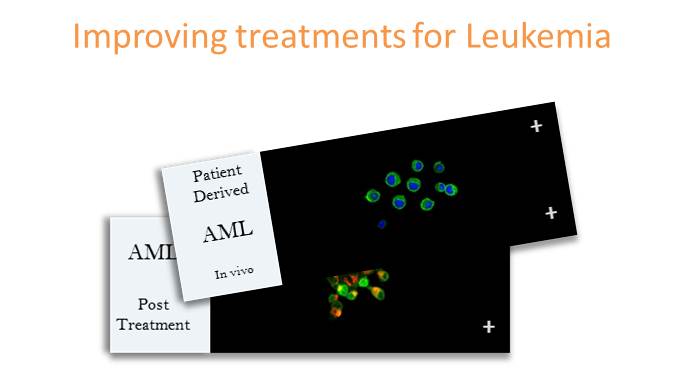 Acute myeloid leukemia (AML) is an aggressive and deadly malignancy that generally affects older people and is a real concern for Baby Boomers and their care takers. New treatments for AML that address the current high rate of relapse are being developed using patient-derived xenograft mouse models.

Without treatment, most patients would live only a few months.  According to the American Cancer Society, about 10,400 people will die from this type of cancer this year. 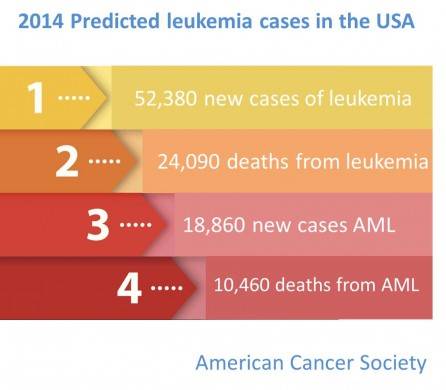 What can we do to advance treatments for AML?

A) Understand the genetic basis of AML in each patient.

Some acute leukemias respond well to treatment, and many patients can be effectively cured. Patients with other AMLs, however, including those that involve mutations in the FLT3 gene or the KIT oncogene, have a less favorable outlook and are the focus of additional research and resources.

Did you know that 1 person out of 3 with AML has an internal tandem duplication (ITD) mutation in the FLT3 gene?  FLT3 tyrosine kinase has a key role regulating hematopoiesis. Mutations that result in the constitutive activation of this receptor are typically associated with a more aggressive disease and a higher frequency of relapses after remission.

Several treatments have been developed in preclinical studies using small-molecule inhibitors of the FLT3 tyrosine kinase. The use of immunodeficient mice engrafted with AML samples derived from patients has revolutionized the way researchers can test personalized therapies in vivo. Here is an example: Effects of the FLT3 inhibitor silvestrol (Alachkar et al 2013).

Other gene mutations, such as changes in the KIT oncogene, have been identified in some patients with AML, and may become important targets for new therapies. Recent breakthrough research in this area demonstrating the improved efficacy of AML chemotherapeutic agents when combined with the KIT kinase inhibitor dasatinib was published recently in Dos Santos et al 2013.

B) Facilitate the availability of experiment-ready AML mouse models.

In 2009, JAX started a Patient-Derived Xenograft (PDX) program that allows scientists to grow tumors from patient volunteers in a near-human environment to characterize them and develop more effective therapies.

Patient-derived mouse models, in fact, are an effective and efficient way to study human diseases and are allowing for sophisticated and personalized targeted treatments. In addition to The Jackson Laboratory’s own research efforts, PDX resources are being made available to external cancer researchers, consistent with our mission to support biomedical research and drug discovery to advance human health.

We are focusing on increasing our inventory of AML-engrafted PDX models and making them experiment-ready for you. 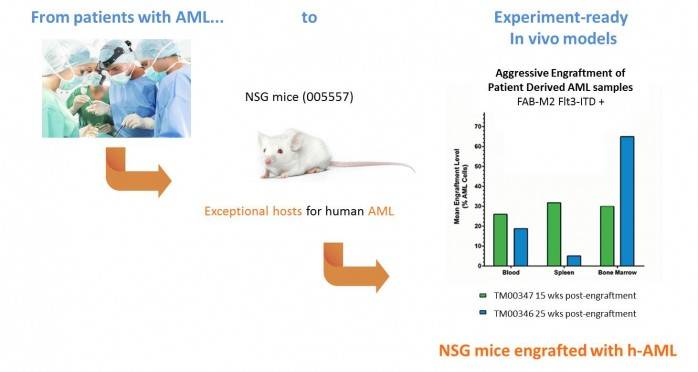 In 2012, PBS NewsHour aired a program recounting amazing testimony from Jane Coyne, a lung cancer survivor, and her UC Davis oncologist Dr. David Gandara,  describing how his  team was studying Jane’s tumor in a PDX model to figure out how to develop treatments for her.

What can you do for AML? Send us your comments, we’ll love hearing from you.