Genetic contamination: the 'elephant' in the mouse room

Not that it’s taboo to doubt the genetic background of a collaborator’s strain before importing it to your lab, but it is definitively one of the elephants in the room. Researchers tend not to question or verify the strain background information they are given, ignoring a potential ticking bomb: genetic contamination due to an accidental breeding error. 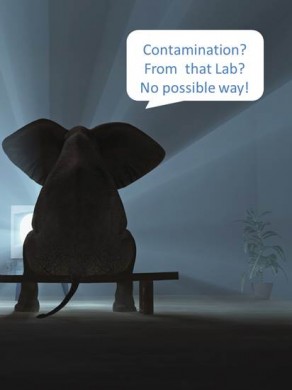 Work with mice long enough and you’ll start hearing horror stories: years of hard work wasted, research dollars lost, and sets of data that had to be repeated due to misinformation regarding a strain’s genetic background.

A manager in our Genome Science Services group told me a recent tale of woe about having to notify an investigator that the strain that she had been working with for over 2 years wasn’t on a “pure” congenic background as expected. She got the mouse model from a trusted colleague and never thought that it could be significantly contaminated with alleles from a second, unrelated strain. The nasty implications for her research program: the group was faced with having to validate its previous results and re-do experiments using a more appropriate control.

We have extensive experience with this issue ourselves at JAX. Every year we import hundreds of strains on reported inbred or congenic backgrounds. While validating their genetic backgrounds, however, we estimate that as many as 10-15% of imported strains are not the genetic backgrounds described by the donating investigators. Yikes!

How can you be sure that your mice are what you think they are?

How many strains are you currently working with whose backgrounds have never been validated? More often than not, investigators don’t check the backgrounds of their colleagues’ mice until things go wrong – unexpected coat colors are produced in a colony, odd behaviors are noted, or greater than expected experimental variability is detected.

My advice to anyone working with collaborators’ mice is to validate their genetic background before you start your experiments.

There is an easy solution: genome-scan your mice.

This panel is super cost-effective if you need to evaluate the contribution of C57BL/6 substrains to a particular research model. Screening your B6 mice with this panel can prevent costly misinterpretation of research results that arise from genotypic and phenotypic B6 substrain differences.

This panel is ideal for evaluating the genetic contributions of specific inbred strains to a strain background. We select SNPs from a list of more than 2,000 and design a panel of 150-200 markers that are spaced evenly across the genome and all of which are informative.

These panels are particularly useful to support the rapid transfer of a mutant allele from one inbred background to another using marker-assisted, or “speed congenic” backcrossing.

Validating both new strains and imported strains when they arrive can save you time, money and headaches – not to mention the embarrassment that genetic contamination and poor record keeping can cause if neglected.