What mice should I use as non-diabetic controls for non-obese, diabetic (NOD/ShiLtJ) mice?

NOD/ShiLtJ (001976) mice are one of the most commonly used mice to model insulin-dependent diabetes mellitus (IDDM; Type I).  But unlike in other Type I models such as C57BL/6-Ins2Akita/J, which develop disease as a result of a single gene mutation, multiple genetic factors underlie the development of diabetes in NOD mice.  Therefore, choosing a non-diabetic control can be complicated, and dependent on the nature of the experiment and the questions being asked. Here we discuss the skinny on which controls you should consider when working with Non-obese diabetic (NOD) mice.

Should I use immune-deficient or immune-competent controls for non-obese, diabetic NOD/ShiLtJ mice?

The first question that an investigator searching for a non-diabetic, NOD control must ask is whether they want the control to be immune-deficient or immune-competent.  Diabetes in NOD results from an autoimmune response in which endogenous T cells attack and destroy the insulin-producing beta cells in the pancreas.

Because immune-deficient NOD.CB17-Prkdcscid/J (NOD-scid ; 001303) mice lack these T cells, they do not become diabetic and are commonly used as non-diabetic controls. The mice, however, lack all of their T cells, not just the auto-reactive ones, and are B cell-deficient, too.  NOD-scid mice, therefore, are immunologically very different from the diabetic NOD inbred mice.

Beyond their usefulness as non-diabetic controls, NOD-scid mice are also an excellent source of diabetes-free islets for adoptive transfer experiments and for delineating the role of T cell subsets in such studies.  Immune-deficient strains with more severe immune defects, such as NSG (NOD.Cg-Prkdcscid Il2rgtm1Wjl/SzJ; 005557), also can be used as non-diabetic controls or as donors for diabetes-free islets.

If your experiments require an immune-competent control, then multiple options are available in three broad categories:

NOD mice are one of the many so-called “Swiss”-derived inbred strains that are all descended from a population of nine mice imported in 1926- by Dr. Clara J Lynch at The Rockefeller Institute from A. de Coulon of Lausanne, Switzerland.  Subsequently, these mice were distributed widely and are the origins of many commonly used outbred strains, such as CD-1, CF-1, ICR and Black Swiss, from which numerous strains have been inbred.  NOD mice were inbred from a subpopulation mice derived from Jcl:ICR mice.  Other commonly used “Swiss”-derived inbred mice include FVB/NJ (001800), ICR/HaJ (009122), NON/ShiLtJ (002423), NOR/ShiLtJ (002050), SJL/J (000686) and SWR/J (000689).

Of these, NON, NOR and ICR/HaJ mice are particularly noteworthy with respect to their uses as NOD controls.  NON mice carry the same MHC haplotype as NOD (H2g7), and are descended from the same starting population of mice from which NOD are derived.  The mice are immune-competent and do not develop frank diabetes, but they do exhibit some autoimmune immunological abnormalities, as well as late-onset obesity and impaired glucose tolerance.  NOR mice are a recombinant congenic strain line in which limited regions of the NOD/ShiLtJ genome have been replaced by genomic segments from C57BLKS/J (000662).  Like NON, these mice also retain the NOD-derived H2g7 haplotype.  ICR/HaJ mice are an inbred strain derived from outbred HA(ICR), and should not be confused with the latter.  They, too, carry the H2g7 haplotype, and do not develop diabetes.

Presently, at least 20 loci within the NOD genome have been identified as contributing to the strain’s diabetic phenotype (see, for example, Ridgeway MW et al. 2008.  Gene-Gene Interactions in the NOD Mouse Model of Type I Diabetes.  Advances Immunol.  100: 152-176 [PMID: 19111166]).  One of the most important of these is its MHC haplotype, H2g7, which has the following mix of MHC class I and class II alleles:  Kd, Ag7, Enull, Db.  Several NOD-derived congenic strains are available that carry MHC haplotypes derived from other inbred mice, including NOD.B10Sn-H2b/J (002591) and NOD.NON-H2nb1/LtJ (001626), and are diabetes-resistant.

Another class of potential NOD controls is NOD transgenic lines that still carry their H2g7 haplotype, but also express transgenes that diminish their diabetes sensitivity.  These strains include NOD/ShiLt-Tg(H2-Ead)5Lt/J (002034) and NOD/ShiLt-Tg(H2-Ead)12Lt/J (002035).  Both of these strains restore expression of a functional H2-Ea protein to antigen presenting cells in the mice, and show dramatically reduced diabetes incidences (almost complete resistance in 002034 mice).  The mice do, however, manifest other autoimmune pathologies that affect other tissues (i.e. submandibular salivary gland, thyroid, and kidney). 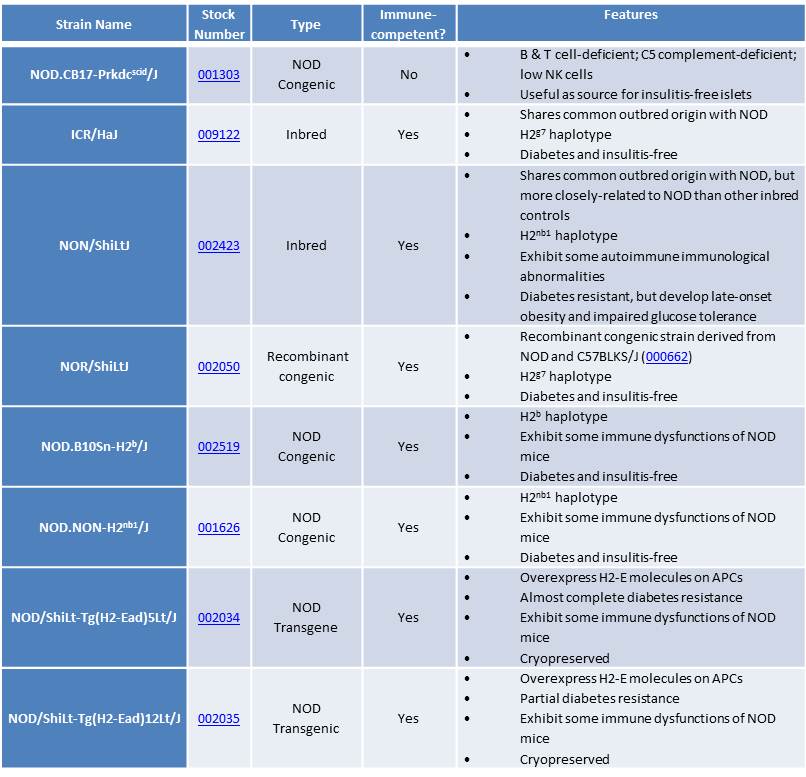