There are over 480 Cre-recombinase expressing strains that are available from the JAX® Mice repository alone. With so many choices, how can you decide which Cre strain will generate the right KO model for you? The choice largely depends on when and where you want your target gene knocked out and the genetic background that your mouse model must be for your data to be meaningful.

The simplest Cre-lox system to generate a knockout (KO) mouse model has two components that need to be genetically engineered in the murine genome: a target sequence surrounded by loxP sites (often called a “floxed” allele) and a Cre recombinase gene controlled by a specific promoter. Typically researchers first generate (or acquire) the two necessary strains, and then breed them together in order to generate the desired KO mice.

Stains carrying the “floxed” allele are generated so that the entire target gene (or one or more of its exons) to be deleted is flanked by loxP sequences, inserted by homologous recombination. Strains expressing the cre recombinase under the regulation specific promoters are created by either classic microinjection of an exogenous transgenic construct or by gene targeting that places the cre gene under the regulation of an endogenous promoter.  In the presence of a floxed allele, the expressed cre protein (Cre) binds to the two loxP sites and precisely removes the DNA between them, leaving a non-functional or aberrant gene behind that carries a single loxP site.

A is for all-body KO

If you need to knockout a gene globally, you need to use a mouse strain that expresses cre under the control of a strong promoter with global or early embryonic expression. Good examples in C57BL/6J background are female B6.FVB-Tg(EIIa-cre)C5379Lmgd/J and male or female B6.Cg-Tg(Sox2-cre)1Amc/J.

An alternative strategy to generate a global KO mouse is to breed your floxed with a mouse that carries a cre under the control of a promoter that directs expression specifically in the germline.

B is for building tissue-specific KO

If you need to knock out a gene only in a specific tissue – in the liver, for example – you need to use a strain in which cre expression is driven by a liver-specific promoter. A good example of a liver-specific cre transgenic mouse on a C57BL/6 background is B6.Cg-Tg(Alb-cre)21Mgn/J, in whichcre expression is driven by the mouse albumin promoter.  On the other hand, if you need to knock out a gene specifically in B cells, you could use strain C.Cg-Cd19tm1(cre)Cgn Ighb/J, and so on.

Our previous blog Cre/lox breeding for dummies explains the step-by-step breeding schemes between cre and floxed strains necessary to generate each of these types of models.  Depending on your goals and your strategy, 2-3 rounds of breeding and genotyping will be necessary to produce mice that are homozygous for your KO allele.

The most commonly used cre transgenes for temporal regulation of Cre recombination are those that can be activated by the administration of tamoxifen, an estrogen analog.  Several routes for administering tamoxifen are available, including via intraperitoneal (i.p.) injections, oral gavage, or in the chow.  What makes this version of cre recombinase inducible is that it is expressed as a fusion protein with the ligand binding domain (LBD) from the estrogen receptor alpha (Esr1) gene. 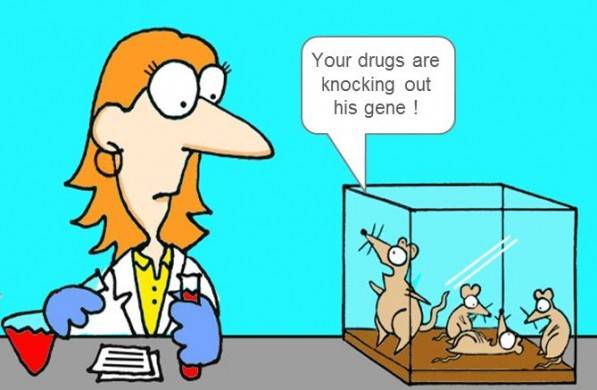 In the absence of tamoxifen, the Esr1-LBD interacts with endogenous heat shock proteins that sequester the Cre/Esr1 fusion protein in the cytoplasm.  Binding to tamoxifen relieves this inhibition and allows the Cre-Esr1 fusion protein to translocate to the nucleus where it recombines target sequences flanked by loxP sites.  This tamoxifen-inducible system is summarized below:

Again, the promoter used to regulate Cre will determine if Cre is expressed globally or in a tissue-specific manner.

The Tet-ON system is a different way to temporally control when a floxed gene is deleted.  This strategy requires three component alleles that must be present in the same mouse for this system to work:

1. Allele that expresses a reverse tetracycline transactivator protein, rtTA, under the regulation of a specific promoter.

2. Cre transgene in which Cre is regulated by a tetracycline-inducible tet operator (tetO) sequence

In the Tet-ON system, tetracycline, or more commonly its analog doxycycline, administration allows binding of the rtTA protein to the tetO sequence, which activates Cre expression.  The tissue specificity is provided by the promoter that drives rtTA protein expression.

The Tet-ON inducible system is summarized below: 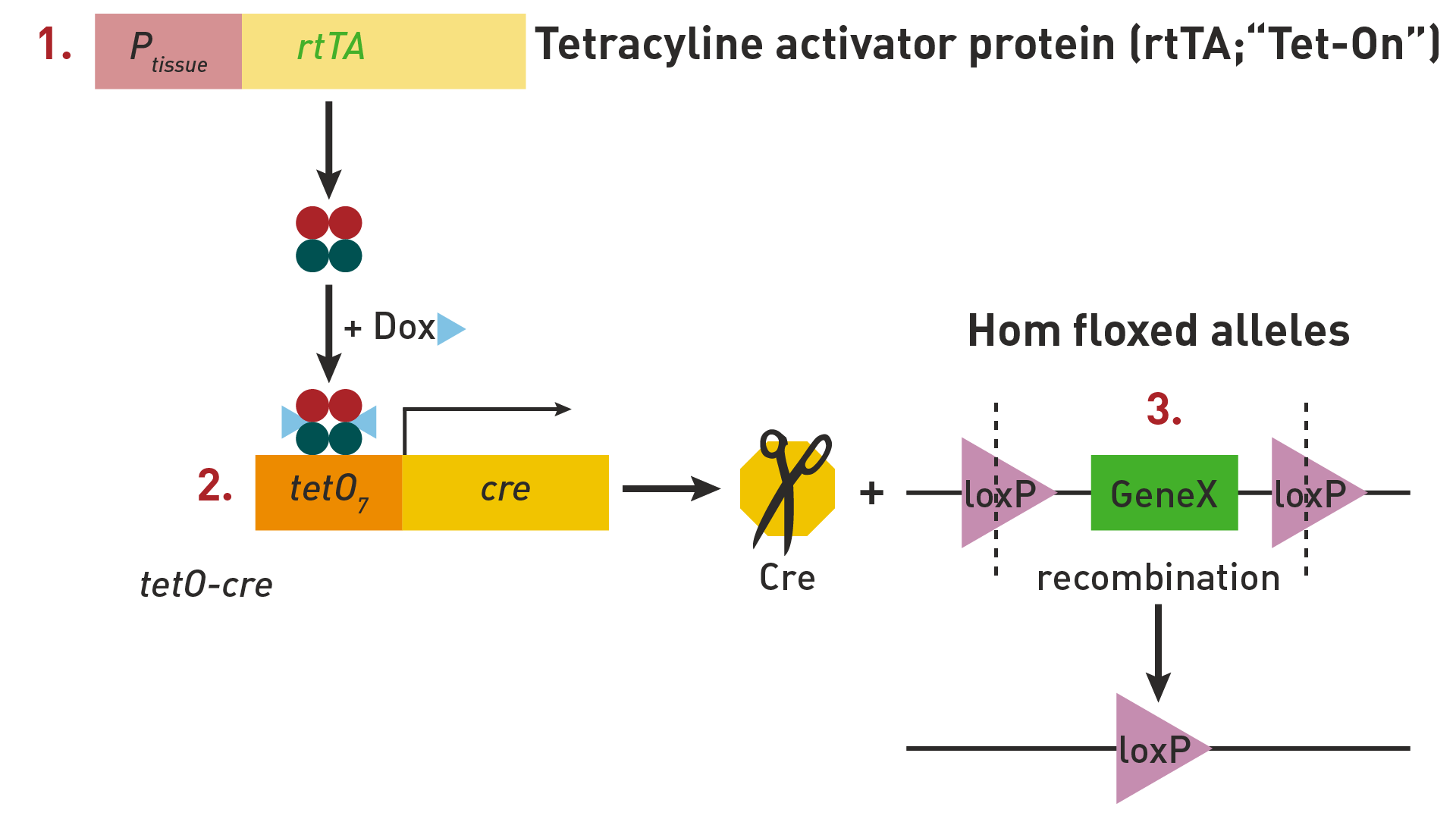 The key difference between the Tet-OFF and Tet-ON systems is in the transactivator proteins that each uses and how doxycycline administration affects their binding to the tetO sequences that control the expression of Cre recombinase. In the Tet-OFF system, Cre is expressed and able to recombine target sequences unless doxycycline is administered. The Tet-OFF system is summarized below:

In Tet-OFF, a different Tet transactivator protein, tTA, binds to tetO in the absence of any inducer and drives Cre expression.  When doxycycline is administered, it binds to the tTA protein and prevents it from binding to the tetO sequence, shutting down Cre expression.  With the Tet-OFF system, you can administer doxycycline to the mice from birth until the time you want Cre activity to knockout your target gene.

To summarize the Tet-inducible Cre systems, administration of doxycycline determines when the KO will occur, and the choice of the promoter that controls rtTA or tTA protein expression determines in which tissue(s) the Cre-mediated recombination takes place.

Cre/lox systems have been fantastic tools for generating not only global KO mouse models but also tissue-specific and inducible knockouts that are used widely to understand mouse genetics and the underlying causes of human genetic diseases.