George D. Snell, the father of immunogenetics and the MHC 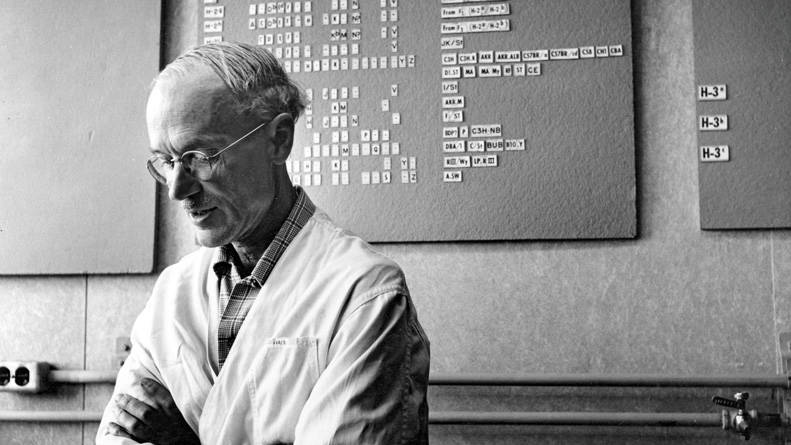 The contribution of Dr. George D. Snell (winner of the Nobel Prize in Medicine and Physiology in 1980) to the mammalian genetics community is hard to exaggerate.  By all accounts Dr. Snell was a humble but great man.  Not only was he the father of an entire scientific discipline, immunogenetics, and the discoverer of the genes that comprise the major histocompatibility complex; he also generated the first congenic strains, a staple of modern geneticists. A student of the legendary Dr. William Castle at the Bussey Institute at Harvard, Snell started his long career at The Jackson Laboratory in 1935 as one of seven researchers at the time.  He joined another of Dr. Castle’s former students, Dr. C.C. Little, the founder of The Jackson Laboratory.

Snell’s work was built on the initial observations by Little and colleagues that resistance to transplantation of tumor tissues between genetically distinct individuals displayed Mendelian inheritance of multiple resistance genes.  Snell extended these observations and worked out both the inheritance and identity of the individual components that were responsible for tissue graft resistance.   Snell and collaborator Peter A. Gorer made the connection that the genes in the mouse responsible for histocompatibility were the same as those described by Gorer in humans, thus establishing a common mechanism in both mice and humans.  Together they named the region the major histocompatibility complex (MHC).  For more information on Dr. Snell’s pioneering experiments, please see Congenic Resistant Strains of Mice.

In his work to identify what was later identified as the MHC, Snell established hundreds (>200 different stocks) of congenic mouse lines.  Snell termed these lines “congenic resistant” lines because of the inability of the new strain to accept tumor grafts from the parental line. Many of these congenic lines are still available in our catalog, along with many of the parental inbred strains: C57BL/10J, C57BL/6J,A/J, C3H, AKR, DBA/2J, RIII, LP/J, BALB/c, 129, and more.

These congenic lines took many years to establish and reflect the many dozens of different alleles present that make up any given haplotype.  If you consider the mouse use and vivarium space alone, an experiment of this scale today would be almost unheard of.  One of the more commonly utilized of the Snell congenics is strain B10.RIII-H2r H2-T18b/(71NS)SnJ (stock # 000457), which is susceptible to chronic experimental autoimmune encephalomyelitis after injection of myelin basic protein.  Many additional strains that were initially developed or maintained by Snell are also still available such as C57BL/10SnJ (stock # 000666) and C3H/HeSnJ (stock # 000661) which are both common control inbred strains.

The significance of Snell’s work is hard to overestimate as it laid the foundation for understanding how transplantation could be successful both in experimental animals and eventually people.  His work also led to further advancements in cell surface marker identification, which can be used to identify cells from a certain strain of mice.  These markers are important for cell tracking when performing adoptive transfer or xenograft experiments or when identification of host or donor cells is necessary.  These markers have also helped to better understand cellular recognition mechanisms in the immune system.

For those you who work with mice, I encourage you to read up on the contributions of Dr. Snell if you haven’t already (see for example, this, this, and that). Even if you are not an immunologist you will be impressed, as I was, by the innovations he pioneered that are still fundamental to our work today with any transgenic or mutant mouse strain.  For example, one of the powers of working with mutant strains is that you can make any mutation congenic on an inbred strain background.  Congenic strains have the advantage of limiting genetic variability so that phenotypic differences can be more readily attributed to the gene of interest rather than the strain background.

Mutations can also be moved from one inbred background to another to investigate potential modifier genes that affect phenotype.  Dr. Snell originated the concept of a congenic line of mice and used it to move the MHC region from one strain to another through successive backcrossing and selection.  Therefore we have him to thank not only for the description and identification of the MHC region but also helping to making our mouse reagents more uniform and informative through the use of congenic strains.