BALB/cJ and BALB/cByJ: How can I choose? I’m so confused!

As part of your research, you read an article that mentions BALB/c mice. You track down that mouse in the JAX® Mice Database, and you wonder which BALB/c mouse the researchers used – BALB/cJ (000651) or BALB/cByJ (001026). What is the difference (if any), and which one should you use for your research?

Substrains: what do you mean they aren’t all alike? 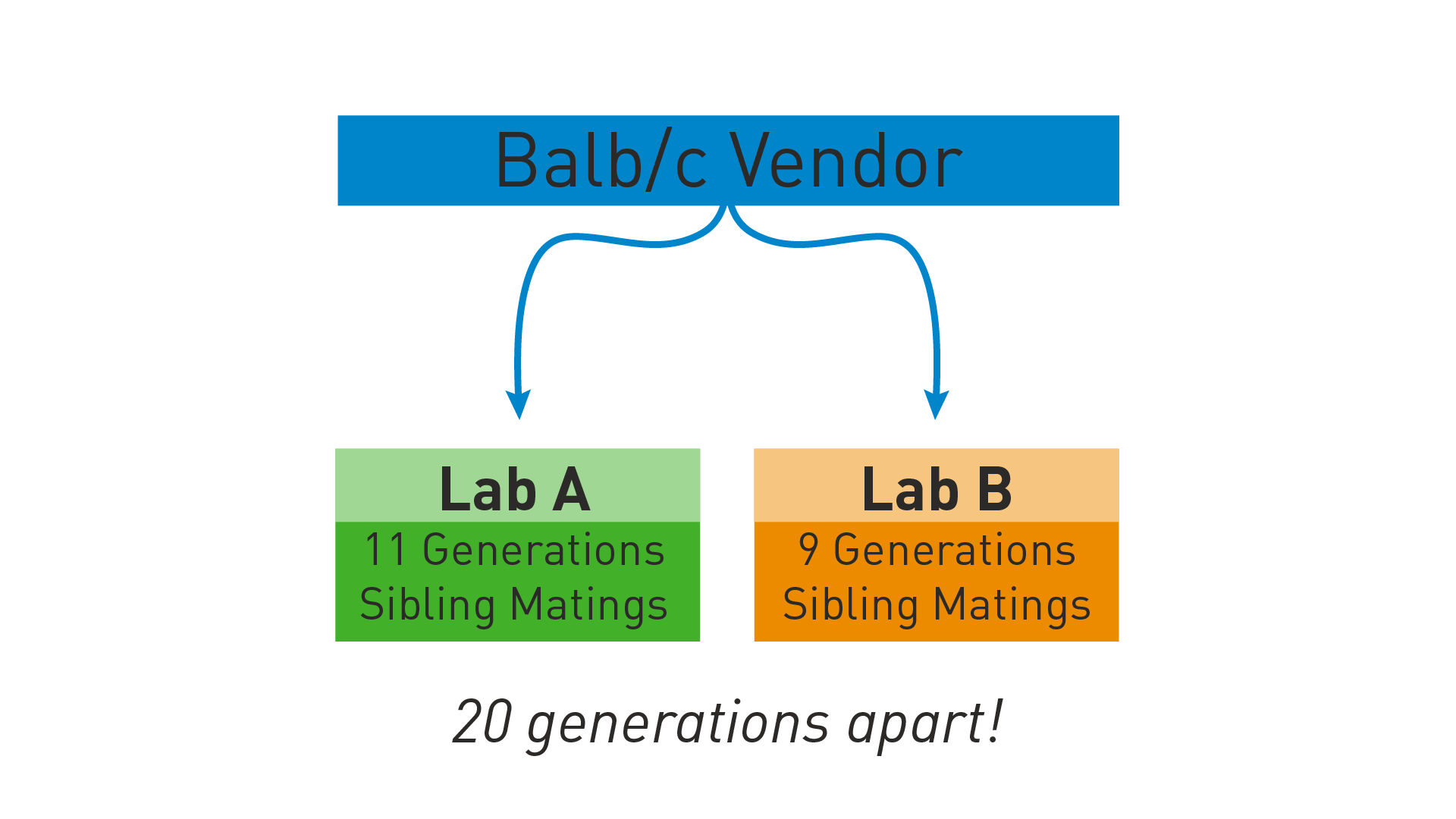 Let’s begin answering this question by briefly reviewing what substrains are. A substrain can arise in a couple of ways: 1) when a spontaneous mutation becomes fixed in a colony, and that colony is maintained as a separate line, 2) when mice from the same parent colony are maintained separately for 20 generations or more. Let’s focus on the second way. Suppose you and I obtained BALB/c mice from the same source. If my colony has been breeding for 11 generations, and yours has been breeding for nine generations, our two colonies are technically substrains of one another. Why? Because they are 20 generations (11 + 9) apart, and, during that time, spontaneous mutations resulting in unique phenotypic differences may have developed.

Similarly, the original BALB/c strain separated into two major substrains (BALB/cJ and BALB/cByJ) back in 1935. More detail on the historical development of these two substrains can be found in Potter et al. 1985 (History of the BALB/c family, Curr Topics Microbiol Immunol. 122:1-5), the Mouse Genome Informatics website, the Origins of Inbred Mice, and in the Handbook on Genetically Standardized JAX Mice. Although closely related, BALB/cJ and BALB/cByJ are not identical.

Known genetic differences between these two substrains include at least three mutations in the BALB/cByJ strain: 1) Acadsdel-J (acyl-Coenzyme A dehydrogenase, short chain) and 2) Ahrb-2 (aryl-hydrocarbon receptor). Although these two strains are considered matched at the Major Histocompatibility Complex (MHC) (they have the H2d haplotype) and tissues can be transplanted between strains, the class 1b locus in BALB/cByJ contains a deletion inQa-2 on Chromosome 17 (Mellor, A., et al., Proc. Natl. Acad. Sci., USA 82:5920, 1985). For additional variations between BALB/c substrains maintained throughout the world see The BALB/c Mouse. Genetics and Immunology, M. Potter (ed.), Current Topics in a Microbiology and Immunology 122, Springer-Verlag, 1985.

Phenotypic differences: you’re not the strain I knew before!

As you might expect from two strains that have been breeding separately since 1935, BALB/cJ and BALB/cByJ have numerous phenotypic differences. BALB/cByJ has a higher reproductive performance and is less aggressive than BALB/cJ. BALB/cByJ females are good mothers and are commonly used as foster mothers. BALB/cByJ mice have spontaneous dystrophic cardiac calcinosis, elevated free fatty acids, high triglyceride levels, and a number of hematologic abnormalities. Other phenotypes between these strains are compared in the Mouse Phenome Database.

Selection of substrains: and the winner is…

Now that you know that substrains of BALB/c exist, it’s decision time. Ultimately, choosing which BALB/c substrain is best suited to your research depends on a number of factors. If you are trying to repeat or build on previous experiments, make every effort to identify and use the same strain. That way, you’ll avoid introducing differences in genetic background and phenotype. Adding a new variable to your experimental design is the last thing you want to do. It’s already hard enough to get statistically significant results! If you are beginning a new line of research, consider the behavior, breeding performance and documented genetic and phenotypic characteristics of the two substrains.