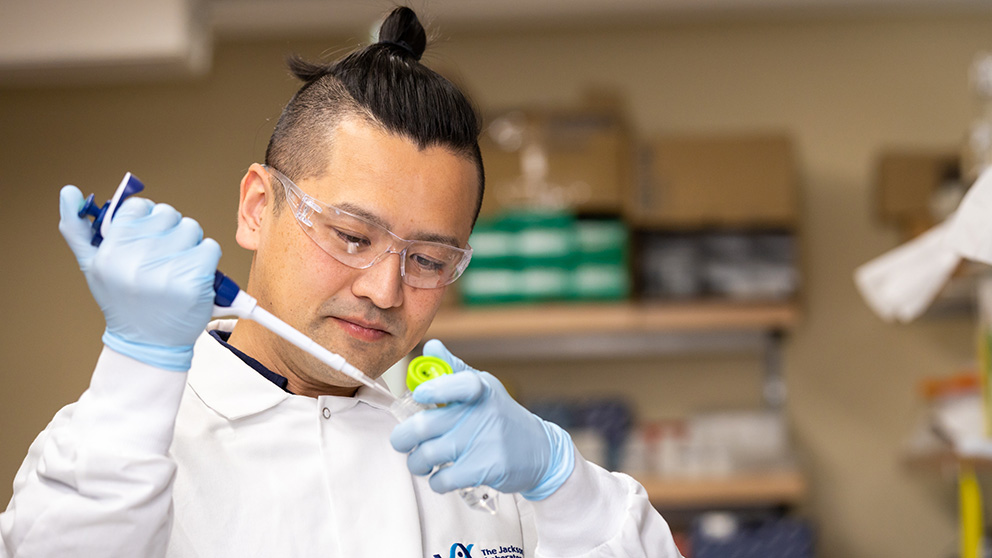 Most of the genome does not code for proteins, but it is nonetheless essential for proper biological function. Large regulatory networks within non-coding DNA sequences help determine when and how genes are expressed. They are a driving force in evolution and underlie proper cellular development, identity and responses to environmental change.

As their name implies, cis-regulatory elements (CREs) are sequences of non-coding DNA that  regulate the expression of nearby genes. While CREs function to both increase and decrease gene expression, a combination of both biological and technical factors has led to far more research into promoters and enhancers, CREs that increase gene expression, than repressive or silencer elements. A group led by Jackson Laboratory (JAX) Assistant Professor Ryan Tewhey, Ph.D., and Postdoctoral Associate Kousuke Mouri, Ph.D., developed a method to detect silencer activity at a genome-wide scale to address the imbalance and improve understanding of the full gene regulatory landscape.

In “Whole-genome functional characterization of RE1 silencers using a modified massively parallel reporter assay,” published in Cell Genomics, the team presents an adaptation to an existing method, known as massively parallel reporter assays (MPRAs), that measures the activity of transcription-activating CREs throughout the genome. The group developed MPRAduo to detect repressive elements on a similar scale. They focused on a well-defined group of silencer elements, repressor element 1/neuron-restrictive silencer element (RE1/NRSE), that are bound by RE1-silencing transcription factor (REST). REST plays crucial roles in non-neuronal cells by repressing neuronal gene expression and has recently been found to repress non-neuronal gene expression in neurons as well.

The researchers confirmed that RE1 sites with strong REST binding do indeed act as silencers that repress gene expression, and that MPRAduo can identify them on a genome-wide scale. They further defined a minimum binding strength of REST that is needed for it, as well as its cofactors, to bind to RE1 elements and effectively silence neighboring gene(s). Finally, they identified human genetic variants that alter RE1 silencing, and that variants disrupting REST binding may be selected against in the population.

“Massively parallel reporter assays have been a powerful tool for researchers interested in identifying genetic variation impacting human health,” says Tewhey. “MPRAduo extends our capabilities and allows us to study variation residing in regions of the genome that have been historically overlooked.”

Investigating genetic variants that affect human health has been challenging, particularly in the vast non-coding regions of the genome. Understanding the regulatory mechanisms that underlie the timing and amount of gene expression—whether enhanced or silenced—is vital for understanding how variants throughout the genome contribute to health and disease. Tewhey and his team provide a way to better identify DNA sequences that have clear functional activity and prioritize variants that affect proper function. The Tewhey lab is currently applying these approaches to existing catalogs of human variation to better understand the genetic causes of various complex diseases in the human population.