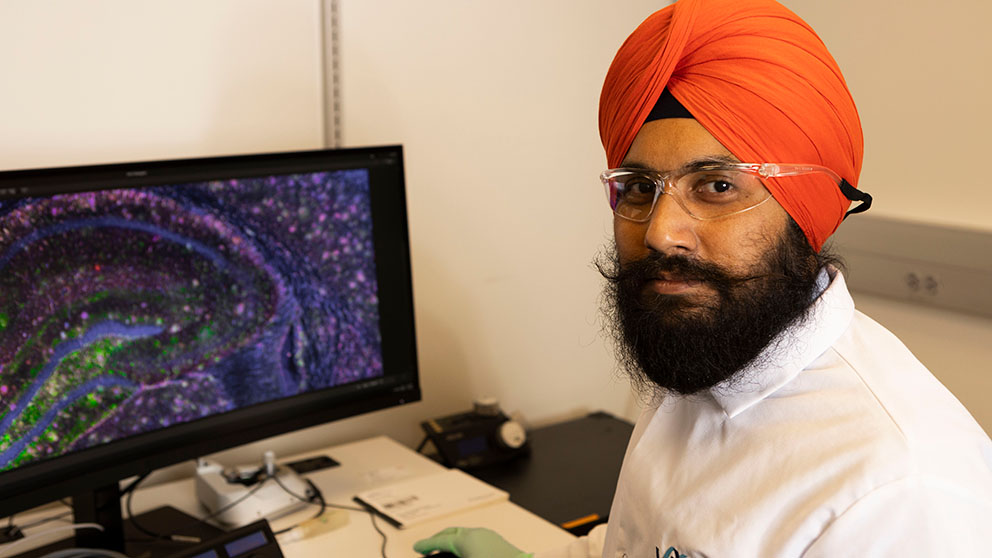 If one thing is certain, Postdoctoral Associate, Surjeet Singh, Ph.D. is engaging and passionate in his pursuit of better understanding the inner workings of something we all treasure, memory.

As a recent recipient of the Alzheimer’s Association Research Fellowship grant, Singh intends to expand upon his interest in memory formation with the goal of finding practical ways to preserve the brain’s function in Alzheimer’s Disease (AD).

The three-year award will help Singh to investigate the mechanisms of Apoe, a gene with variants known to make some individuals more or less resilient to cognitive decline in AD.

After studying as an engineer, Singh first launched his career as an assistant professor in engineering and then a government officer in the Department of Governance Reforms before being swayed to change fields entirely. Singh credits much of his switch to biology to his wife, Harpreet Kaur, as she had her Ph.D. in neuroscience. By reading her papers, Singh realized he enjoyed the narrative of science, how it is open to discussion, and how each new finding builds off each other. Kaur also works at JAX as an associate research scientist and received the same research grant earlier this year to study gut-brain interactions and how they differ between sexes in AD.

“It is funny,” says Singh. “Prior to my Ph.D., I had only taken one biology class, in 10th grade. I am an example that anyone can pursue new passions.”

Making the switch to science does not mean Singh abandoned his engineering mindset. On the contrary, as a member of the Kaczorowski lab, he attributes much of the success of his current research to the fact that he has an unique approach. “As an engineer, you are given a problem and you must develop the steps and necessary tools to get you to the solution. This is the approach I like to bring to my research,” says Singh.

So, you think you can…make memories?

There is an observable cadence in all life forms, demonstrated via routines and interactions. Similarly, memory is a three-step process consisting of encoding, consolidation, and retrieval. Encoding and retrieval happen during wakefulness and consolidation happens during sleep. Singh describes making memories as a coordinated dance or interplay of neural rhythms across multiple areas of the brain.

“One may think that learning and remembering events or facts, like dropping the kids off at school, checking emails, grabbing lunch with a friend, or attending a lecture are only part of the waking hours,” he says. “On the contrary, these memory traces are reactivated or replayed during sleep to become a consolidated memory.”

The sleep cycle has two parts, REM (rapid eye movement) and non-REM. Memory consolidation occurs during non-REM sleep. Conversations, observations, and daily rituals are reactivated or replayed much like an episode of your favorite TV show. Unlike your favorite 20-minute sitcom series, we are not re-watching everything we did that day down to the minute in one night. Each essential event is played in fast-forward and is over in a split second. In that short breath and repeated reactivation, the entire episode is consolidated into a neat package ready for retrieval when needed.

Singh plans on taking a deeper dive into neural signatures of memory encoding, consolidation and retrieval, and how they are altered during Alzheimer’s disease. In addition, he intends to observe how genetic variations in the APOE gene may provide either resilience or susceptibility to memory functions and cognition. Excited to begin, Singh will initiate his experiments by observing brain activity during sleep to determine how, where, and when a disruption affects the consolidation step of the memory process.

Singh is the perfect example of following your passions. A big proponent of learning, he views gaining his Ph.D. as a critical turning point not only for his career, but his mental approach. One of his many mentors taught Singh and his fellow lab mates to think of research as a story to be told and not a script to stick to. Singh has adapted this and many more experiences to his work at JAX. He is grateful to have continued to find mentors who have allowed him to push boundaries and not shy away from challenges.

When asked if he would change anything about his earlier research efforts, Singh is confident in his response. “Absolutely not. I was fortunate to have excellent researchers to mentor me,” he says. “I would not change a thing.”