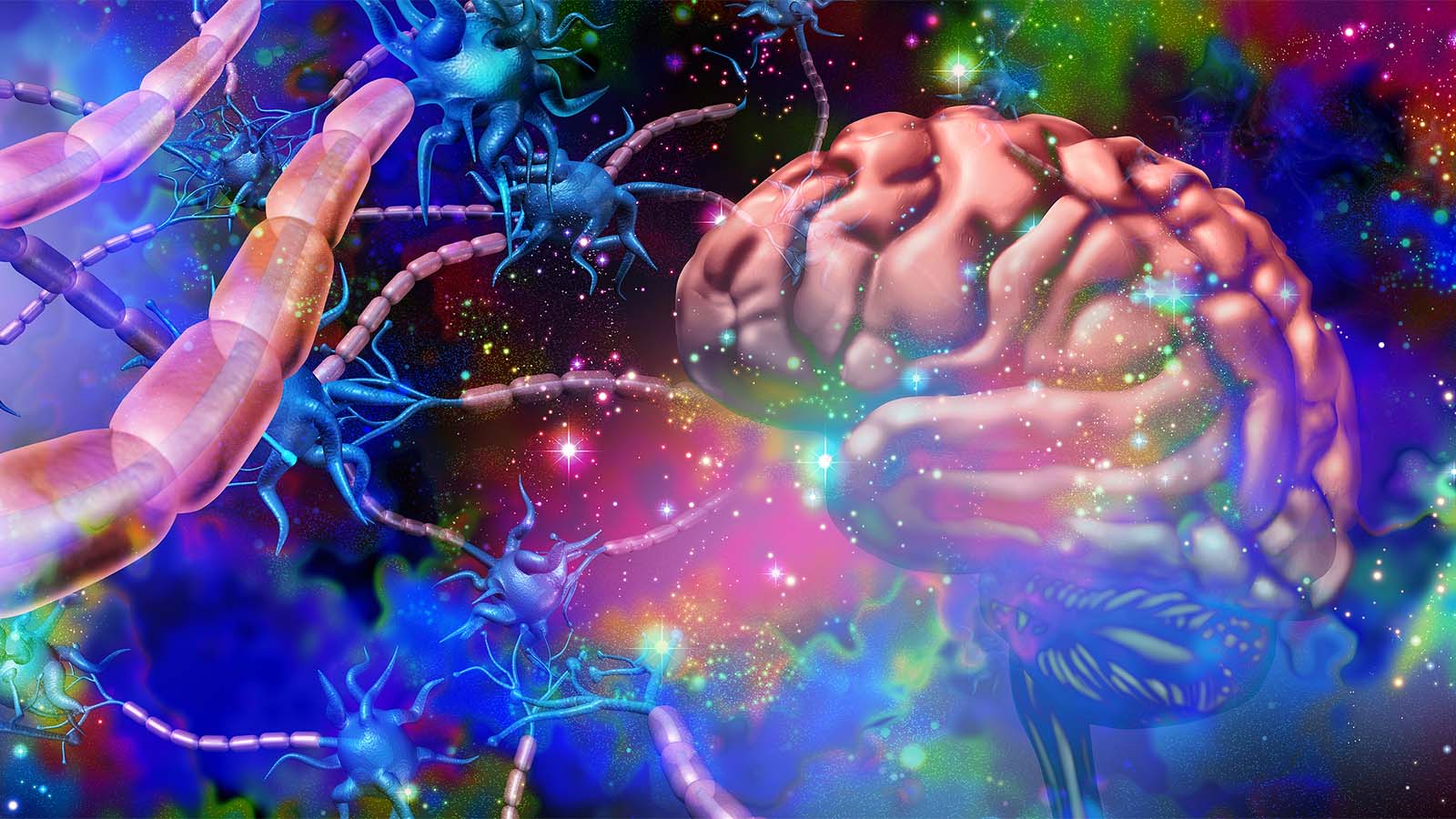 Understanding how we use our brain to make decisions is a daunting task given our brain's extensive webs of neural wiring and circuitry. Now, JAX researchers are using a surprising tool to investigate goal-directed behaviors: the rabies virus.

The biology underlying cognition and behavior is truly extraordinary. It’s not something we often consider, but what we think and what we do depends on the correct organization and connectivity of roughly 86 billion neurons in human brains, each making thousands of synaptic connections with other neurons. These neurons process contextual information in the form of sensory input combined with memory information derived from previous experiences to drive our goal-directed behaviors. Neurons come in many different classes that also fill different roles, further complicating things. Given its fundamental importance, it would be immensely valuable to fully understand our brains’ neural wiring and circuitry and how it supports optimal decision making. The sheer scale and complexity involved, however, make such research and discovery highly challenging.

Over the past decade, neuroscientists have used an unlikely tool, rabies virus, to map synaptic connections between neurons in model organisms such as mice. Rabies spreads transsynaptically from neuron to neuron and can be tracked via fluorescent labeling. A recent change to the rabies strain used, from SAD to CVS, has improved researchers’ ability to effectively label and map long-range connected neuronal circuits within the brain. Using the CVS strain, Jackson Laboratory (JAX) Assistant Professor Erik Bloss, Ph.D.The Bloss Lab uses various genetic, structural and functional approaches to understand how synaptic connectivity among cortical cell types underlies behaviorally-relevant neural computations.Erik Bloss , Ph.D., and Postdoctoral Associate Kourtney GrahamIntegrates in vivo Ca2+ imaging and chemogenetic techniques to investigate neural circuits involved in the regulation of food intakeKourtney Graham , Ph.D., led an investigation of neural circuits associated with the infralimbic (IL) region of the mouse frontal cortex, a region of the brain specifically associated with the selection of goal-directed behaviors. In “Hippocampal and thalamic afferents form distinct synaptic microcircuits in the mouse infralimbic frontal cortex,” published in Cell Reports, Bloss and Graham present details regarding input sources that target distinct neuron classes within the IL, as well as brain regions that receive output from it.

Prior work using the SAD rabies strain had indicated that the majority of neurons targeting different interneuron classes in the IL were local, also residing within the frontal cortex. Using the CVS strain, Bloss and the team identified distinctly different patterns of long-range inputs extending from the hippocampus and thalamus brain regions. Furthermore, the inputs varied depending on neuron type within the IL. Using transgenic mice specifically designed to permit genetic access to cell types based on their differential protein expression, the team mapped connections onto neurons expressing parvalbumin (PV), somatostatin (SST), vasoactive intestinal peptide (VIP) and neuron-derived neurotrophic factor (NDNF). They found that the PV, SST and VIP neurons receive the largest proportion of their inputs from the hippocampus, while inputs to NDNF neurons come mostly from the thalamus.

In mice, IL output is associated with controlling the expression of fear-related behaviors. Bloss’s findings also indicated that the neurons providing output from the IL show similarly distinct patterns of hippocampal and thalamic wiring. Although identifying these cell-type specific connectivity rules sheds light on how these distinct neuron types process different streams of information, exactly how the input streams are differentially computed by IL neurons to drive specific behavioral response is still unknown. The new work provides insights that will constrain existing hypotheses and generate new ones that seek to explain how the functions of IL circuitry emerge from the specificity within the synaptic architecture.